Ok, first of all, some of you are SO mad that yesterday I didn't say a single thing about April Fools' Day.

What the heck, Eli? How lazy can you be? You don't even deserve to be called an obnoxious jerk anymore.

I have a couple of pretty good email chains going on right now with unsuspecting victims and I thought one of them would be ready to post by yesterday, but I was wrong. And somehow in the stress of the day, I completely forgot to play 5,000 life-ruining April Fools' Day jokes on people, other than pushing Daniel down three flights of stairs while he was holding a bunch of knives. But he seriously can't take a joke so it wasn't even that funny.

And actually, I hope to play a great one on Daniel later this week. He doesn't know how to read a calendar so he never knows what day it is anyway. So what I need from you all are some ideas. Did any of you pull off any good pranks? Any good ones from past years? You can leave your ideas in the comments. Daniel won't see this because he STILL doesn't read Stranger. Which means we can gossip about him and he'll never know. Psst! I heard that Daniel still wets the bed!


It's only been in the last couple of years that I have come to terms with the holiday. My April Fools' Day memories from my childhood are very traumatic because Bob and Cathie HAVE NO BOUNDARIES when it comes to terrorizing their children. Bob and Cathie are like the 60-year-old couple's version of Jolyn, who very suspiciously hasn't tried to ruin my life for about three months now.

It's almost been too quiet.

Cathie gets it from her mom who once ran around screaming that the house was on fire at 2:00 in the morning and then locked her 10 children out and made faces at them through the windows for one hour after they ran to the front yard crying.

This same woman, now 83 years old, to this day still brags about all the chocolate-covered soap she has tricked innocent people into ingesting over the years.

I know what you're thinking. Shouldn't someone who is raised by such a person go to the opposite extreme?Also, Eli, Daniel was totally just being jealous yesterday when he told you that you definitely look fatter than you did when you got to Palau.

And second, I don't know what happened to Cathie, but for whatever reason, she inherited the terribly mean prank gene. And then cultivated it. And turned it into a gene that only terrorists have.

When I was 17, on April Fools' Day she covered her head with fake blood and yelled for my help. I ran to her aid LIKE A GOOD AND LOVING SON and when I got there she said in a delirious-sounding voice, "someone's . . . in the house." Then she "fainted" against the wall. It was then that I saw my 15-year-old sister Micalyne in the background, unconscious on the floor, also covered in blood.

And I started crying. I ACTUALLY started CRYING.

I grabbed a yard stick within reach, my weapon of choice, and yelled "mom! NO!!!"

And what did she do? She sat up, pointed at me, and started laughing. Then Micalyne sat up and started laughing at me too. And then my mom said, "you thought a murderer was in the house and you decided to grab a yard stick, cry, and call for your mommy!?!?! HOW OLD ARE YOU?!?"

They were exactly like that Farkus kid and his side-kick from the Christmas Story.

The thing that makes this all so confusing is that Bob and Cathie otherwise appear to be the sweetest most kind-hearted people you will ever meet. They genuinely seem to care for everyone. And they seem incapable of doing such terrible things to their children.

You can be chatting with them. Having a nice heart-to-heart. Hearing all of their wise advice.

And then, suddenly, Bob is pretending to have a heart attack while driving. Or Cathie is yelling that she's ready to tuck you in while you're talking to a girl you like on the phone. Or both of them call a family meeting to tell their children that they are going to have another baby, AND THEN LET THEIR CHILDREN GO ON FOR ONE FULL MONTH OF PICKING OUT BABY NAMES before telling them it was an April Fools' joke.

Oh how many times I saw Bob call the Jerry Springer show to ask if they had any interest in doing a special on how he found out that his great grandmother was having an affair with the one-legged 20-year-old daughter of one of his cousin-girlfriends. Or how many times I heard him haggle with the phone operators for products he saw on infomercials.

"Now instead of the Magic Bullet, could I just get a regular blender?"

"I saw on the tv that it costs $19.99. Do you think I could get that broken down into six easy payments?"

"Before I agree to anything, will I have to actually use it to see results or will I get rock solid abs just for having it in my house?"

In 1996 Bob and Cathie encouraged and aided 10-year-old Micalyne in convincing her friend FOR AN ENTIRE CALENDAR YEAR that she had a twin named Melinda. Micalyne and Melinda used to take turns playing with this friend. It got so bad that a birthday party invitation showed up to our house addressed to BOTH of them. Micalyne had to call and explain that Melinda couldn't come. This friend still brings this up whenever she is around my family.

My three sisters caught the spirit of the whole thing very early on and have played malicious, mean pranks on me since I was a small child. As a result, The First Eye haunted me beginning at age six, as did our oldest sister "Christina," who allegedly died in a car accident and roamed the basement singing. Also, I defended my claim to multiple classmates all throughout my adolescence that I was, in fact, 1/4 Mexican because my older sister told me so.

So, any good ideas out there? 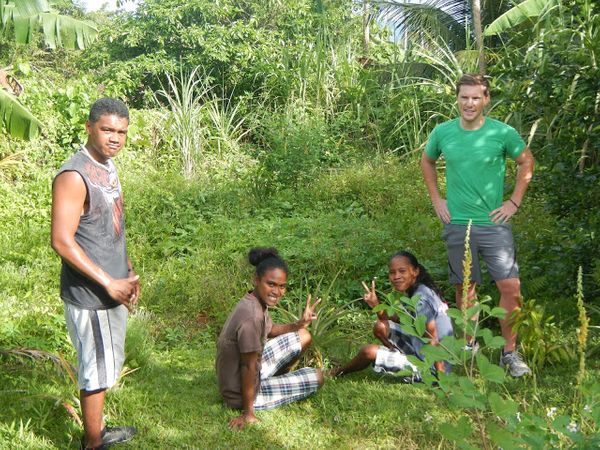 Last Saturday I experienced 4 hours of back-breaking labor in the garden behind the church. The Mormon church building in Palau sits on a beautiful piece of land that overlooks

It's Monday in Palau. Easter has ended. The gigantic loaves of Ukrainian Easter bread Daniel spent 9 hours baking yesterday mostly remain in my kitchen, untouched. He says he didn't mean to make so much. But the recipe just kept calling for more and