The photo above is how I always want to remember Daniel, long after he has died from food poisoning or from sticking his hand into a blender or something equally frustrating and totally avoidable.

Saturday was my 29th birthday. And it was the first one in a few years that did not begin with an absurdly long voice message from Cathie that has all of the following parts:

1. Twenty or more birthday songs, most of them made up, sung in excessive vibrato.

2. A variation of "[Blank] years ago today we were together. And it was wonderful. Well, it was wonderful for you. I had just gone through a bloody massacre and was moments away from death. You're welcome, by the way."

3. Forgetting that she's leaving a voice message and talking to someone else for a while.

Instead, Daniel and I got up at 1:00 AM to head up north for the Palau Marathon.

Fourteen men and three women signed up to run the thing. And it started at the northern part of the big island on the coastline. The big island is mostly jungle and waterfalls with the occasional small village.

They started the marathon at 3:00 AM, hoping to keep us from having to run in the blistering heat that is a constant reality in Palau. Have I ever mentioned that before? No? Well let me just take this time to tell you now:

IT'S SO FREAKING UNBELIEVABLY HOT IN PALAU ALL OF THE TIME ALWAYS!!!!

We thought that starting the marathon in the middle of the night would do the trick but when we got out of the car and took a breath of the suffocating muggy air, we knew it was going to be a long day.

The race began and within a few minutes Daniel and I were running completely alone. It was surprising how quickly the runners had all spread out.

The course was the most difficult one I've ever attempted (this was my sixth marathon) and it seemed that we were constantly running up a steep hill. Cars drove ahead of us and waited every mile or two to offer water and we were very fortunate to have an incredibly enthusiastic senior Mormon missionary couple meet us every two miles along the way with all of our personal items and excessive amounts of cheering. Elder and Sister Carter, you are true saints.

The day before the race I had memorized 26 jokes, which I had planned to tell to Daniel at each mile marker along the way. Unfortunately, because I have no self-control, I busted through all 26 of them within the first two miles.

By about mile five, it seemed like we both needed some optimism. So that's when I started singing a song from my childhood, very very energetically.

Think positive, believe you can!
Do anything that you plan!
If you will life will treat you grand!
Think positive man!

After about 45 rounds of "Think Positive!" sung at the very top of my lungs, Daniel finally spoke up.

Daniel: FOR THE LOVE OF ALL THAT IS HOLY PLEASE STOP THAT!!!!

Daniel: No, Eli! This has to stop! This can't continue! I can't do this anymore!

Eli: That's why you just need to . . . Thiiiiiink positive, believe you can--

Daniel: I said STOP! I'm not joking! This cannot go on any longer.

Daniel: AND NO HUMMING IT EITHER!

Daniel: AND NO SNAPPING AND SINGING IT IN YOUR HEAD!

Eli: You are a murderer of happiness, Daniel. A murderer.

Not long after that Daniel remembered that he hadn't run for like two months and so he told me to go on up ahead because he needed to slow down. I didn't really train for this thing either but I've been running a little bit each day. Plus I was thinking super positively because of the song, so I was in a better place than Daniel.

We split up and before long I was completely alone in the jungle. We were running with headlamps because it was so dark out there. The moon wasn't even out. But after a while I turned mine off so I could just watch the Milky Way above.

When I turned my headlamp off, it was surprisingly dark. So much so that I could only see the road for a few steps in front of me at a time. And besides the road, there was really no sign of civilization anywhere.

The sounds of jungle suddenly seemed so deafening, and I saw the silhouettes of dozens of bats flying over the road above me. The road was narrow and the tall trees and vines hugged each side as though about to overtake it. And as I ran alone in the darkness I had so many emotions come rushing through me at once.

I wasn't sure if it was because I was sleep-deprived or dehydrated or freaked out because of the jungle animals or if it was because it was my birthday and I was just feeling nostalgic, but tears came to my eyes as I thought about how surreal this all was. And for so many reasons I knew this was going to be one of those moments that I would always remember. A moment that was sandwiched within a much greater period of my late 20s in which I have known so much beauty and sadness, peace and struggle, and a number of other things I can't seem to wrap my vocabulary around just now.

I was so grateful in that moment that I am where I am and experiencing what I'm experiencing. And I thought about how differently I see the world around me now than I did eight months ago when I first came to Palau and didn't find the solitude so peaceful and the bats so charming. That race through the muggy darkness, all alone, was such a metaphor for my journey through the greater Palau experience this year, and a few of the thoughts in the middle of the night about whether I really was strong enough to make it to the finish were a little too familiar.

The race was hard. I mean, really really hard. But as I ran, it being hard didn't seem so preclusive. Because I've been through some hard things recently. Some that have been really really hard. And I just kept thinking, if I could handle *that* surely I can handle this.

Eventually light pierced the sky, right around the time that I crossed the bridge over to Koror, the island that most people live on. The last eight or nine painful miles continued up and down hills through town, across a causeway to the island I live on, and passed my apartment building. The course ended on the beach at a resort just down the street from where I live. I crossed the finish line and went straight into the ocean. A while later Daniel came by, now barefoot and looking way too happy.

I went home after the race, climbed into bed, and finished turning 29. The transition was magnificent.

Graduation is happening across Palau right now. I got an invitation to a graduation for this coming Sunday, which I'm excited to go to because when they call the names I like to wait until the people sitting next to me cheer and then 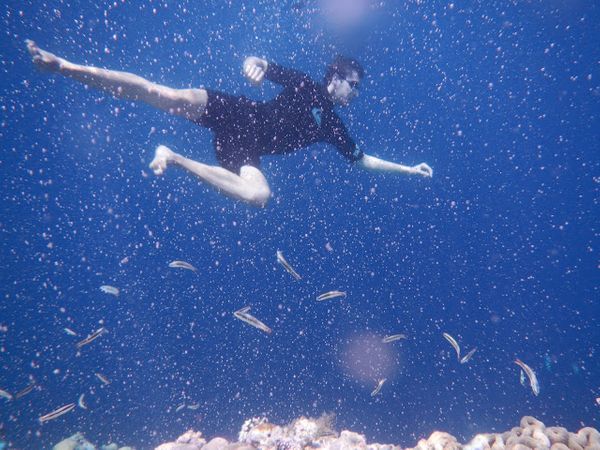 Dear Strangers of the world. Tomorrow (May 18th) is my birthday. I can't believe I'm turning 65 again. I know you all want to send me cheesecake in the mail