There are two newspapers in Palau: The Island Times and Tia Belau. They are glorious beyond all description. Typically filled with stories about people we know, separated by racist or otherwise offensive comics, it's hard to pass up the opportunity to snag one of the papers and take a gander.

Living in a very small town, the local newspaper feels very similar to our school newspaper in college. Except, instead of letters to the editor from angry students who did not appreciate the use of the word "damn" in the prior edition (note: I went to BYU--God's university) there are "tide calendars" and entire pages of Sudoku puzzles.

Recently Daniel somehow came across an email address for someone at Tia Belau and decided to try his hand at journalism. He wasn't sure how to get something published in Tia Belau so rather than contact them and ask, like a normal person, he just typed up an article on a topic he found interesting and emailed it over. His email contained no explanation whatsoever about who he is, why he wrote this thing, or what his expectations were for it. It was just an email with his proposed article copied and pasted into the body. The subject line of the email: "For Immediate Print."

His little experiment worked, because the very next day his completely unchanged article found its way to middle of page four.

He called me when this happened:

Eli: You're Lois Lane? Why not be Clark Kent?

Daniel: Don't try to ruin this moment for me! I'm an esteemed journalist, writing about the real issues people face.

Eli: Ok. What are you talking about?

Daniel: JOURNALISM. I have an article in the newspaper! I have a NATIONALLY syndicated column!

Eli: I think we need to have a talk about journalism and what that is.

Sure enough, I found his article a few minutes later. It was about some health initiative he is trying to implement at the Ministry of Health. He was proud, and felt like king for a day. Friends called and told him they loved his article and I heard him saying stuff in response like, "oh that old thing? That's just how I write when I don't care how I sound!"

He took the idea of "nationally syndicated column" to heart and immediately started emailing new articles every day or two. At first his yelling at me "please be quiet! I'm working on my column!" was entertaining. But as the days wore on and the newspaper kept printing WHATEVER THE HELL HE SENT IN WITHOUT A SINGLE QUESTION ABOUT IT, the whole thing started to get more and more confusing.

Then I thought, I live with a . . . nationally syndicated journalist. Why have I not used it to my advantage yet?

A few months ago I told you that I ran a 10K in Palau and I actually won it. It's the first race in my life that I have ever won. And as luck would have it, the race results were never announced, recorded, or published anywhere. It feels like it didn't even happen. Guys. I WON A RACE but nobody in the country knew about it and showered me with compliments for days.

Fortunately Daniel was extremely obliging when I made the suggestion. "Please fit me in to your next article. I don't care how. And include in there that I was the winner of the 10K a few months back."

Seriously, Daniel? I have been trying all morning to imagine with a straight face that exclaimed statement coming out of my mouth.

As the time in Palau winds down more and more, I'm finding that things are just sort of falling into place. There's still much to do. Every time I remember that I somehow need to find a place to live in Salt Lake City 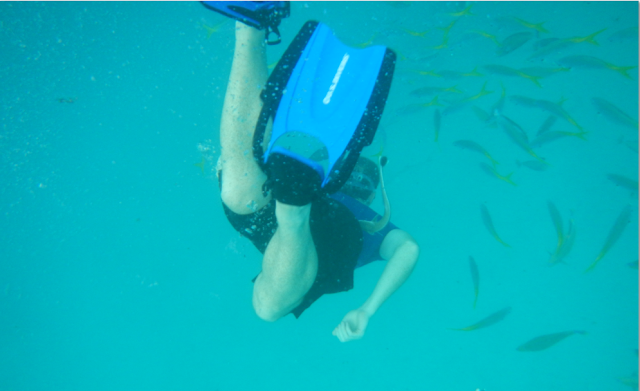 Happy weekend, Strangers. It's rainy today in the land of coconuts. Actually, it has pretty much been raining non-stop for about three weeks. I haven't minded this because it has