As the time in Palau winds down more and more, I'm finding that things are just sort of falling into place. There's still much to do. Every time I remember that I somehow need to find a place to live in Salt Lake City so I can immediately move upon arriving in the United States of America, I can hear the sounds of a ticking clock in the back of my head. But all in all, things seem to be going relatively smoothly on the move-to-the-other-side-of-the-world front.

I wonder if it hasn't seemed that bad because compared to last year when I was trying to move to Palau it just hasn't been that complicated. Moving to Palau was a perturbable nightmare. You know that feeling you get when you are rushed out of the house because you're late and for the rest of the day you have this nagging sense that you forgot to turn something off?

I had that feeling for about three months, but amplified. In about one-quarter of the time I actually needed, I had moved everything I owned into boxes, storage units, people's houses, etc.

I was literally taping up a box in the car on the way to the airport for someone to ship to Palau for me. And when I started filling out the customs form for the box, I realized that I could not name one single item that I had just put into it. I had so frantically started throwing loose items into boxes that didn't make it to the storage unit that I was no longer paying attention to what was going where. So I took my best guess and then hopped onto a plane. That box arrived in Palau a few weeks after I did. In it: seven partially used rolls of tinfoil, loose silverware, and a bunch of unopened credit card offers that had come in the mail.

That kind of disorganization doesn't seem to be happening so far. I've been slowly but meticulously making organized to do lists and including things in them like "make an organized to do list" so I can already have something to check off. And with four weeks to go and a substantial amount of planning to do, I'm not actually feeling all that overwhelmed.

But the real reason I'm writing today, besides the fact that I get angry emails if ever I don't post (see, April 2013), is to get some advice from you about my homeward-bound journeys.

I've decided to take the scenic route home. The responsible thing to do would be to get back as quickly as possible and attempt to get my affairs in order before I start working again. But then I began looking at flights and seeing all of the cool places I could stop by on the way home for basically the same price. So, Asia, here I come!

I don't have a lot of time but I'll spend a full day in Seoul Korea and then about two and a half days in Hong Kong. I've never been to either of these places.

When I told Bob and Cathie I would be traveling alone, they immediately started forwarding me articles about human sex-trafficking.

And I was all, BOB AND CATHIE! I ALREADY HAVE A JOB!

So, I'm wondering whether any of you are familiar with either of these two cities and whether you have any advice for traveling to them (what to see, what to avoid, what to eat, where does the Queen of Colors hang out, etc.).

If you don't have anything to say on this topic, maybe just leave an unjustifiably angry comment about your most hated fashion faux pas.

While Krishelle was visiting Palau the best part of the day was when Daniel and I would go and wake her up at about 6:45 in the morning. I was sleeping in Daniel's room while she was here so she could have my 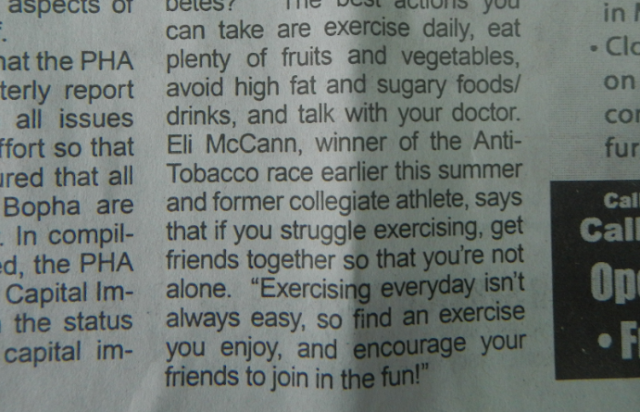 There are two newspapers in Palau: The Island Times and Tia Belau. They are glorious beyond all description. Typically filled with stories about people we know, separated by racist or