On Saturday I went diving with some friends. I would probably be permanently done with diving by now if it wasn't for the sea turtles. This is because there are animals that live ALL OVER in the ocean. And I really think that I just gave you the exact definition of "Hell." Seriously. Go look it up.

(You totally didn't go and look it up. That's how I was able to get away with telling you that the definition of "Hell" is a place with animals ALL OVER. This is what I learned in law school.)

I got certified to scuba dive when I first came to Palau one year ago. And the first handful of times I went diving I basically just screamed in one continuous fifty minute exhale until we surfaced. Unfortunately the water muffled my calls for help so I was unable to escape the horrors that I saw down there until the instructor said it was time to go up.

And look. I know. I probably could have just shot back up without the instructor, flying into the air like a trained dolphin at SeaWorld, and landing directly onto the boat, but they gave us this whole scare tactic thing during the class about how our bodies would explode if we didn't stay with the instructor at all times. At first when they said this I was all like, "Really, scuba people? You're going to try to use impossible threats to force my compliance? I was raised by Bob and Cathie. I'm immune to your antics."

But then I saw a violent war movie where people actually exploded and it was gross so I thought I shouldn't take the risk.

Every time one of my friends asks me if I want to go diving I'm always like, "MIND YOUR OWN BUSINESS AND LEAVE ME ALONE!!!" And then they're all, "but SEA TURTLES." And then I immediately tie weights to my neck and jump into the deepest part of the water head first with this look on my face the whole time.

And that's basically how I ended up diving on Saturday.

Daniel didn't go. He also loves the sea turtles, but only to a healthy degree, and not enough to decide that it's worth it to go diving for a whole day to find them. Daniel has other issues too, though, that keep him away from diving. For one, every single time he goes more than five feet under water, every hole on his face starts shooting blood out of it like he's a fire hydrant that got hit by a bus. But also, for some reason Daniel tends to go through his air about three times faster than anyone else.

That is not an exaggeration. Our air is supposed to last us close to an hour but after about twenty minutes Daniel will start violently pulling my hair and doing the "I'm out of air and I'm going to die" hand signal. Then usually the guide has to rescue him and take him up early. We all tried to talk to him about this to find out why he breathes so much more than other people. And yes, he's a giant, but it still seems excessive.

I don't like it when Daniel goes up early because then there's one less person to pay attention to me so last time we went diving we finally worked out a system where I would sneak him air out of my tank through my emergency air tube thingy. I don't think you're supposed to do this unless the person has actually run out and it's an emergency. But I usually have plenty of air leftover because I don't inhale the entire time because I'm doing the one continuous scream so I started sneaking him my emergency tube for ten minutes here and there when the instructor wasn't looking.

Well Daniel didn't want to deal with all of that so I went without him on Saturday.

We went on two dives and I'm sure there was plenty of amazing stuff to talk about and blah blah blah but let me get to the sea turtles. Because we saw like FIVE OF THEM!!!! My friends all know why I'm there so whenever anyone sees a sea turtle they usually get my attention (I'm typically just doing underwater flips at this point and pretending to fly). Then I follow the sea turtle until the instructor has to come and physically pull me away.

But this time was extra magical. I was floating above it for some time and then suddenly it stopped, looked up at me, and we made eye contact for like four minutes. And it communicated all of the secrets of the universe to me. And I swear it told me to grab onto its legs and glide with it under water for all eternity. And I know it sounds crazy, but I really got the sense that I could just shed my scuba gear and live with it in harmony forever. Then I took my breathing thing out of my mouth and tried to take a breath just to see and I swallowed all of this salt water with fish poop in it and started choking and I was all, "THIS IS EXACTLY WHY I DON'T LIKE DIVING!"

Have you ever lived with another person under the same roof? You have? Well this post is probably for you! Daniel is driving me CRAZY. And I think this is one of those things where I turned a blind eye to a lot of 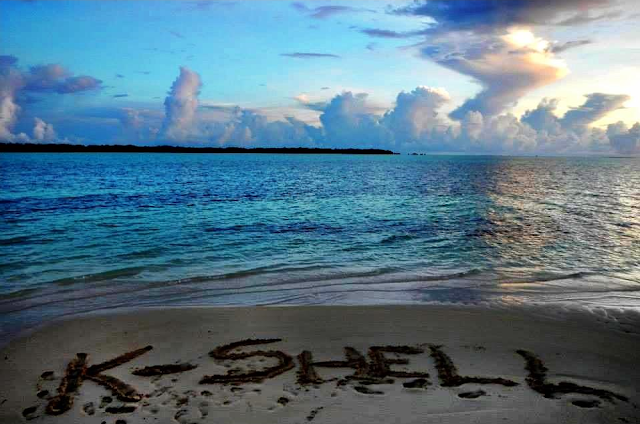 Five weeks from today I'll be finishing my job in Palau and boarding a plane that will leave the land of coconuts and take me to the land of absolutely-everything-else.