I was at Bob and Cathie's house the other day and they threw a photo album in front of me of a trip they took not too long ago. I was glancing through it and I saw this nice candid shot of Cathie.

I know that there's some way to do what the kids are calling "the scanning" and I could post this picture without the reflection of myself taking a picture of the picture with my what the kids are calling "the iphone." But I don't know how to do any of that. Also, this isn't one of those blogs you go to to see good photography. Or to learn things. Or to join a cause.

I seriously don't know what you people come here for.

Wait, I think I had a point. I did. That point is this: I constantly post stuff on Stranger about how Bob and Cathie destroyed my childhood by terrifying me throughout it through their special custom-made subjugation and the infliction of inhumane pranks and teasing. And I frequently poke fun at Bob and Cathie on Stranger and make them seem like cartoon characters. But I hope they know that I actually think the world of them. Even if the female half of them used to drag me out of church by the ear every single Sunday and the male half of them once made me drink half a gallon of milk in one sitting, telling me that I had accidentally swallowed poison and this was the only cure.

I like you guys, Bob and Cathie. This picture is extra proof that there's no way you're in your 60s. Not in body, or spirit.

And I'm not just saying that because you were the first ones to correctly diagnose my ringworm.

One more reminder that The Porch is on Thursday evening. Doors open at 8:00 and the show starts at 8:30. I think there are still tickets and you can purchase them here [http://utahporch.org/provo]. Also, I know that even when 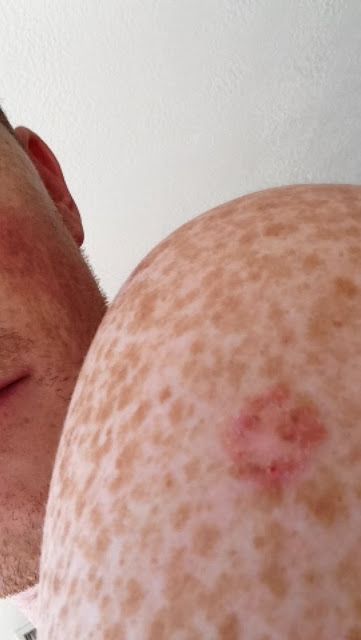 Remember last week when I was worried that I maybe had skin cancer? With my particular kind of skin (cough--FRECKLES--cough--hash tag, searchingforacure), skin cancer runs in the family and is,