Since I know everyone is extremely interested in the Pioneer Day Marathon Toenail Disaster of 2014, I'm here to provide you an update! Yesterday, while sitting in my professional lawyer office, aka my dorm room/hospital/place where I apparently think it's ok to take off my shoes and socks and perform surgery on my disgusting feet, a miraculous but horrific thing happened.

My little sister Micalyne had been responding to my frantic texts throughout the day asking what the hell I was supposed to do with my large toenail, which I previously told you was functioning like a car hood. I could raise it up and look underneath it. And it was gross.

Micalyne is the bravest human being I've ever met in my life. And not just because she has changed adult diapers without flinching. I truly don't think I've ever seen her look nervous or scared.

Additionally, despite being the size of a small child, she inexplicably has superhuman strength. If we lived in one of those societies where each family had to give one son to go fight in the war, Bob and Cathie would totally shave Micalyne's head and be like, "this is the strongest son in our family. Don't mind the boobs."

In fact, I frequently say that Micalyne is the son that Bob never had.

My family is mostly afraid of her. A couple of weeks ago we were all at Bob and Cathie's house and Micalyne's four-year-old spitfire child Emrie, the one who hates me and sang "Let it Go," informed me and my oldest sister Krishelle, "I'm going to take one more bite of my dinner and then go outside and play."

Krishelle: Ok. Is that what your mom said?

Emrie: [With serious attitude] No. That's what I said.

[Emrie starts to walk out the door]

Eli: Should we stop her?

Krishelle: No way. I'm not getting in the middle of a dispute between Micalyne and Emrie.

Cathie: [overhearing Krishelle's last statement] Good call. These are the two scariest people I know. It's going to be best to avoid getting involved when those two finally face-off once and for all.

Micalyne is a very competent nurse and she kept telling me throughout the day that I needed to do various things with my toenail. Things that sounded right, but kind of painful. So I was scared to follow her instructions.

Then, finally, in my office, I decided to pull the Band-aid off and do another assessment.

And as I did, the horrific disgusting terrible thing I alluded to above happened.

THE TOENAIL CAME OFF WITH THE BAND-AID!!!

I looked down at the massacred toe and screamed!

I couldn't believe how horrifying it looked. It was the stuff of nightmares. They should show pictures of it to kids in juvie to scare them into behaving. In our next war the Air Force should drop leaflets covered with the image all over enemy grounds.

Since you are now curious, below I give you a picture of the toe. WARNING! THIS IS DISGUSTING! DO NOT LOOK AT IT IF YOU ARE AT ALL SQUEAMISH! YOU HAVE BEEN WARNED! YOU HAVE NO ONE TO BLAME BUT YOURSELF IF YOU PROCEED!


The Queen of Colors

Just kidding. That wasn't it. Even though that picture was scary.

Stop screaming! You were warned!

Naturally, I immediately sent this picture in a mass text to my entire family. Everyone responded within about 15 seconds.

Cathie: HEAVENLY DAYS IN THE MORNING! I WANT A NEW SON!

Krisanda: I just lost my will to live.

Krishelle: I think I'm going to take a leave of absence from my job to recover from this.

Bob: Come over. We are amputating that toe.

Cathie: AND THE POLICE! WHY HAS NO ONE CALLED THE POLICE! YOU SHOULD BE ARRESTED FOR SENDING US THIS PICTURE!

Krishelle: I'm throwing this phone away. I need a new phone.

Krisanda: I just dug my eyes out with a spoon.

Micalyne: Good job. You need to soak it and disinfect it. Send me another picture tomorrow so I can see how it's healing.

I was a little freaked out for the majority of the afternoon. But then I sort of got used to things and decided to embrace it. In fact, I'm now calling it "Tami." And I know. On first glance it kind of looks disgusting. But it's actually really pretty if you picture it with blonde hair.

Tami and I are gonna get along JUST FINE. 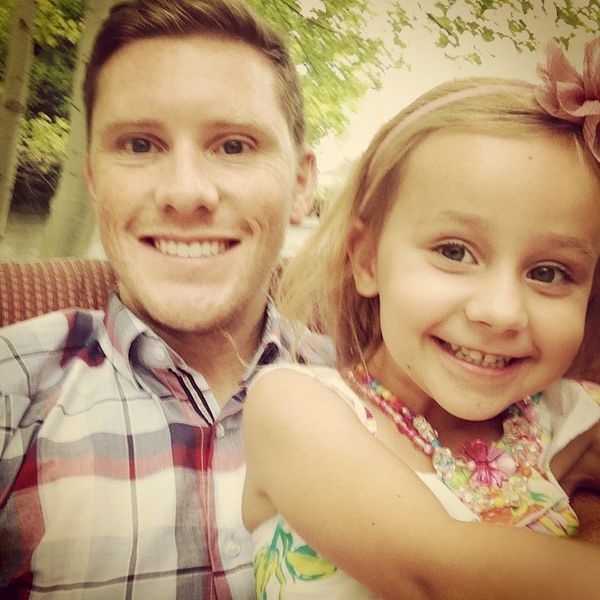 If you're still reading Stranger, you are a crazy person. This week I regaled you with stories about getting locked out of the pool area in a Speedo. I have

The Ironman is only like eight weeks away now and I know this is likely not the case, but I think we may have somehow gone through a time warp and skipped like eleventy weeks. Because just a few minutes ago the Ironman was