I hadn't planned on working Friday because PIONEER DAY. The pioneers would not want me to work on the greatest holiday of all time and I'm respectful to their wishes because I was raised right. Hashtag Bob and Cathie grinding their own wheat when I was a child.

But then Thursday night happened. A number of work emergencies popped up and kept me on the phone until quite late. And, as though work emergencies have no respect for bonnets and the Utah state song, they ate most of my Friday as well.

I sat, in my home, working for most of the day, stressed out, filled to the top with anxiety. I texted a coworker to ask whether I could enter the witness protection program to hide from my job but he replied that it's already too full of lawyers and they aren't accepting any more at this time.

The evening came and a handful of friends showed up. I had agreed to host a Pioneer Day party for the non-Utah-born-and-raised heathens in my life so I could teach them a number of pioneer songs and help them understand the glory of Tami's birthday. I put the work down. We cooked absurd amounts of food and enjoyed ourselves in my backyard until exactly 10:25 when Young Wade made a comment that changed everything.


What he said was totally inconsequential. But it just so happened to remind me of something work related. Something I was supposed to do by midnight. Something I had intended to do the day before but totally forgot to do because of the other work emergencies.

I needed to fax something to someone. Something I, very fortunately, had finished writing a few days previously when I was being my very responsible self.

You guys. I swear. I had an out of body experience when I realized that I had forgotten to send this fax. I think I touched the ground one time in my travels from where I was sitting across the 40 feet to my car.

Without any explanation, I, in a frantic daze, abandoned my own party and gaggle of confused guests.

I drove in reverse at the speed of light through my very narrow driveway. And that's when I slammed into the side of a car that was parked on the street.

If ever there was a moment in my life when I did not have time to get into a car accident, it was this. And if you haven't gotten the sense yet of how stressful my job became to me that night, know this: when I hit the car, the only thing I could think was, "I CAN'T DEAL WITH THIS RIGHT NOW! I HAVE TO SEND A FAX!"

I pulled out my phone to call Young Wade and ask him to leave a note on the car for me. But as I looked back and saw the vehicle I had hit, I realized that it was, in fact, Young Wade's.

There was a tinge of relief in that moment because it meant that I could probably just deal with this later. And so, like the world's worst hit-and-run criminal, I sped away from the scene, fully expecting that some neighbor probably saw this and would be calling the police.

BUT I DIDN'T HAVE TIME TO DEAL WITH MY BRUSH WITH THE FUZZ! FAX, you guys! FAX!

Moments later I saw my time get eaten away as I was thrust directly into the center of a Pioneer Day traffic jam. I had totally forgotten about the MASSIVE firework show and festival happening exactly between my house and the office.

What is typically a ten-minute drive suddenly became much longer, and by the time I was screeching into my parking spot and sprinting to the elevator in my office building, it was now just after 11:00.

I got into my office a moment or two later, with now less than an hour to go. I swear to you the sound of the clock ticking was deafening. AND THERE WASN'T EVEN A TICKING CLOCK IN THERE.

I turned on my computer and then realized, very shamefully, that I had exactly zero of the practical skills that were necessary to accomplish this task.

I frantically dealt with the letterhead situation the best I could, but it ate plenty of time. And then I texted my assistant: "HELP ME!!!!"

I rushed to the fax machine and followed her texts, step by step. I put the paper in the top. I selected the correct options. I typed in the fax number. I hit send. The fax machine swallowed the paper and spit it back out. And then it printed a page with two horrific words:

I texted a picture of this page to Brianne. She informed me that the fax didn't go through.

It was at this point that I started having a full-blown panic attack. Hyperventilation. Chest pressure. Tingling feelings all over. And not the good kind. Like when you're in love with a good person. (Or so I've heard).

I texted a colleague and explained the situation. I was as dramatic in this text as possible. It was now nearly midnight.

He attempted to talk me off the ledge, explaining that it was going to be fine, that if I couldn't get the fax to go through that night it wouldn't be nearly as big of a deal as I was assuming, and to "GO HOME AND FINISH YOUR BARBECUE LIKE A NORMAL PERSON!"

Remember when you were a child and you made a mistake but with your child understanding you had no idea how big of a deal that mistake was so you just assumed it was the end of the world? I remember thinking I was going to go to jail when I was 7 because I punched Simon Jones in the nose during recess. EVEN THOUGH HE DESERVED IT BECAUSE HIS NAME WAS SIMON.

Well, the same thing sometimes happens to me with my job. And this night was one of those moments.

It was a relief to hear that I was not going to be fired and exiled to live in a colony of incompetent morons and that in fact it really wasn't a big deal and happens all the time.

But I still felt disappointed for letting something slip like this and I still felt the lingering effects of all of the anxiety that had eaten my peace of mind over the course of the very stressful week.

I sat down on the floor, leaning up against the fax machine, trying to take deep breaths between all of the shallow ones. My head was pounding and I felt exhausted all over. Exhausted both emotionally and physically at the end of a very long Ironman training schedule and in the middle of a somehow-even-longer work year. The building was abandoned, but I could hear faint sounds of firework Pioneer Day celebrations outside. Evidence of a very full and happy world echoed into my lonely and tired one. And then I got a text from Young Wade:

I read it. And I realized that, no, not really. Everything was sort of not ok right then. I was sitting on the floor in the office on a Friday night near midnight while a party carried on at my home, doing breathing exercises to hopefully stop myself from fainting. I was tired and stressed from my very heavy workload. Heavy in both substance and volume.

But worst of all, I had let the stress and anxiety get in the way of the gratitude I should always have. Gratitude because I have the luxury of feeling anxiety over problems that aren't even life-threatening. Gratitude that's strong enough to keep anxiety at bay.

I stood up and tried to send the fax one more time. To my surprise, and only a few minutes before midnight, I received a confirmation that the fax had gone through.

I made the deadline.

I wandered back to my bruised car and drove it home.

The party was over now and the friends had cleaned up and gone home.

I surveyed the damage to Young Wade's vehicle. It wasn't the disaster I thought it was going to be, but he would clearly need some auto body work.

Young Wade was sitting on the couch. I meandered over to him and sat down.

Eli: You knew? How did you know?

Young Wade: Well, I was parked directly across the street from the driveway and white paint perfectly matching your car is now all over mine. It wasn't very difficult detective work.

I apologized profusely and vowed to have it repaired. Because Young Wade is one of the kindest youths of his generation, he brushed it off instantly and was more interested in talking with me about why I had run out of my own party and whether everything was ok.

I went to bed a few minutes later, my enlarged heart pounding, and a little more grateful than I had been the day before.

I wore the heart monitor for ten long days, just like I was instructed. I slept with it. I ate with it. I watched an excessive amount of TV with it. It's basically the longest and most healthy relationship I've ever had. If it 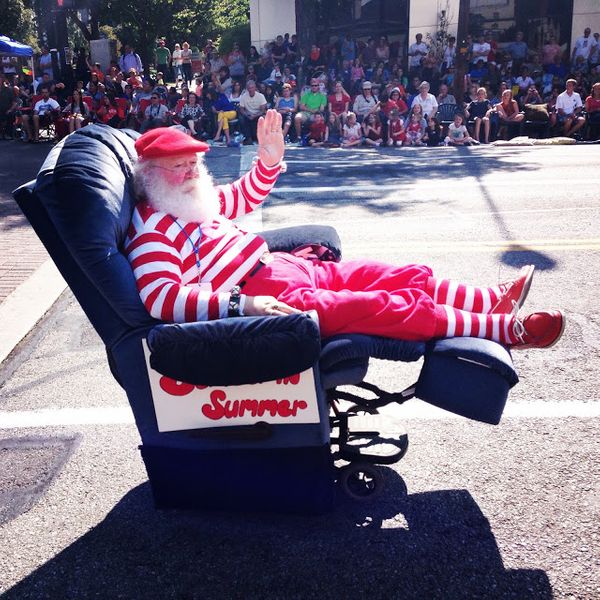 You guys. Are you sitting down? Are you in a padded room? Have you taken your Xanax? Is there someone around to restrain you? You guys! PIONEER DAY IS THIS