Recently my friend Adam, who is the most talented human being who has ever lived in the history of all living AND I'M INCLUDING EVEN THE BAND HANSON IN THIS showed up to my house with the surprise of all surprises. And I'm not referring to Mr. Teddy Scraps, who belongs to Adam and who literally made me start crying when he came to my house for the first time last week.

I know you probably think I'm joking but I'm actually not. I literally started crying when I met Mr. Scraps. Adam brought him in and my mouth immediately opened so wide that NASA is now studying me for violating our current understanding of every law of physics.

I fell onto the floor and Mr. Scraps jumped on me, peed, and started licking my face. And I was so happy that a tear came out of my right eye and rolled down my cheek.

No. It wasn't that I just got a little teary eyed. I had enough tear for one to roll down my cheek.

Adam was just dropping Mr. Scraps off for me to watch him since I was working from home that day. And Mr. Scraps and I fell in love and he's now my mistress that I'm lying to Mr. Pants about when I tell Mr. Pants that he's the only dog in my life.

But, no. The amazing thing that Adam brought to my house a few weeks ago was not Mr. Scraps.

Adam does this thing I've never really understood called "working with his hands" wherein he makes things. With his hands. With his bare God-given hands.

Specifically, he makes furniture. With his bare hands. And tools. He's basically Ron Swanson but without a mustache.

I don't understand this craft. But I am incredibly impressed with anyone who can do it. I actually think people who can make things with their hands and who understand technology should be our royalty. We should have to bow to them and clap when they get on planes.

I had admired his work by screaming scintillating hyperbole in all caps when he showed me some pictures. And so, having some extra supplies and understanding that I'm the type of person who literally cries of happiness as a dog is peeing on him, Adam knew that making a surprise coffee table for me would be appreciated so much that you could see my happiness from space.

And so, he showed up to my house recently and had me help him unload some supplies that he assembled in my front room. I didn't understand what this thing was until it was fully put together because my spatial reasoning skills are so tragic that they should probably give me a handicap parking sticker.

But then it came into view.

You guys. He salvaged the wood for this thing from an abandoned 19th Century mine in central Utah. This 19th century mine.

There were some old and very weathered planks near the mine that were badly damaged. He was able to save some of the wood from them and turn it into furniture. USING HIS BARE HANDS.

AND I DON'T EVEN SAY BOMB.COM.

I love it with every fiber of my cries-at-the-sight-of-puppies being.

Thank you, Adam. I promise to always make Matt use coasters.

Last night I got an email just as I was about to get ready for bed from someone at the office asking me to do some relatively time-consuming work by 9:30 AM the next morning. This meant that I basically had 12 hours 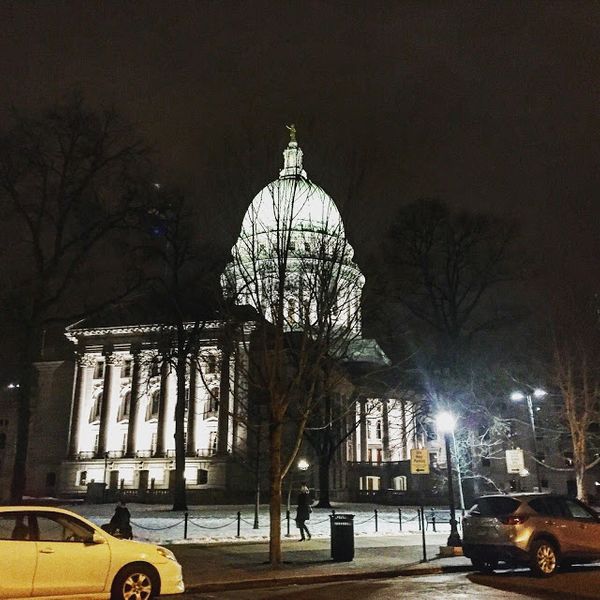 I mentioned on FB last week that, realizing I was going to be in Madison Wisconsin, I simply had to try to stalk Dean Strang. So obviously I emailed him