As you are aware, Mr. Duncan Doodle got neutered last week.

It was every bit as dramatic as it sounds.

I was required to deposit him in the neighborhood home for lost dreams at 8:00 in the morning. Mr. Doodle had no idea why we were there, even though I had tried to explain it to him through the use of such children's books as "You Were Smaller Than A Dot" and "Why Your Testicles Are Being Sawed Off."

NOT THAT WE KNOW WHAT TESTICLES ARE.

When we pulled up in the parking lot, Mr. Doodle bolted for the door. He could hear the animals inside and so, I assume, believed we had arrived at a McDonald's Playplace for puppies, which WHY DOES THAT NOT EXIST. But by the time we arrived inside and Mr. Doodle took inventory of the half dozen shaking terrified dogs sitting wide-eyed and horrified next to their owners, coupled with the warning calls of tortured animals in the back room, Mr. Doodle's entire attitude changed.

A woman with so many tattoos that she is technically a different race now screamed instructions to me over the sounds of backroom despair, telling me to sign 17 dozen forms acknowledging that my puppy was probably going to die from this. Or, at least never love me again.

She asked me if I wanted various other services, most of which were foreign to me. I made these decisions by looking at Mr. Doodle as though he was listening and considering the options for his own body.

And then, before I could back out, Skeletor appeared from behind a door, scooped Mr. Doodle out of my arms, blew cigarette smoke onto him, and slipped away. The entire time, Mr. Doodle's giant puppy eyes bore into me, weeping the words "I thought we were a family."

I drove to work, distracted and probably crying. At one point I thought a light had turned green and so I pulled into the middle of an intersection, and then had to reverse and sit among a dozen cars who had all watched the error.

1200 hours later, and at the end of the longest work day of my life, an unknown number rang my phone. Skeletor was on the other end, telling me it was "finished," like she was a hit-man I had hired to eliminate the leader of my Russian mafia rival group.

I drove at the speed of light and found myself in the waiting room only seconds later. The synthetically-ethnic tattoo woman delivered a 17-minute monologue about all of the ways I could kill my puppy if I didn't follow her every instruction. She responded to the dear-in-the-headlights look I presented back to her with a piece of paper supposedly summarizing everything she had said.

Then Skeletor walked out, carrying Mr. Doodle, a cone around his head so comically large that he looked like gerbil in comparison.

Mr. Doodle didn't respond to me when I held out my arms for him. "OUR RELATIONSHIP IS ALREADY DIFFERENT," I heard myself blurt. Skeletor comforted me by saying that Mr. Doodle was so stoned that he didn't even know what century it was anymore, which actually made me make an "awwwwwwe" sound because the thought that he ever knew what century it was seemed really cute to me.

And then we left.

He did not care at all how cute it was on him.

Every time I set him onto the floor and took one step away, he turned into a demon from Hell, thrashing, slamming his body against furniture, making screaming sounds of which I did not know dogs were capable.

When I could finally gather him into my arms, he would shake and cry for five minutes.

I tried everything. I put him on a leash and attempted to get him to take a few steps so he could see that the cone wasn't going to kill him. It didn't work.

I pet him and said encouraging things. It didn't work.

I even tried the cone on myself to show him that it was totally ok to wear. It didn't work. And it also made me hate the cone, too.

I took to google. And I found several forums of people asking for advice because their dog was "freaking out" with the cone on. But as I read these forums, the questions would say something like, "my dog is freaking out. He just sits there and doesn't move." And then people would encourage the questioner to just be patient and let the dog get used to it.

These internet dogs were not freaking out. They were freaked out, maybe. But what I was experiencing was unprecedented.

So, finally I drove Mr. Doodle to Petsmart and told a woman who smelled like cigarette smoke DO ALL ANIMAL PEOPLE SMOKE WHAT YEAR IS THIS what was happening with the cone. She helpfully located a blow-up airplane neck pillow for him, because I guess she thought I had said he was about to take a long flight.

It fit, so we took it home.

Mr. Doodle spent the remainder of the evening in a stoned daze. I sent Matt and Skylar a video of him so they could help me diagnose his level of consciousness. Skylar responded 30 minutes later with some video editing.

Before too long, I discovered that the neck pillow wasn't working, since Mr. Doodle is apparently training for Cirque du Soleil and so can bend his body in impossible ways to lick his crotch.

I was desperate. We couldn't go back to the cone. But I couldn't provide 24/7 supervision either. Because eating and TV.

And that's when @sherrypg and @stefikosama came to the rescue on Instagram.

They told me to try putting Mr. Doodle in a baby onesie.

When I first read this, I dismissed it outright. Because I'm not those kind of people.

But then, ten minutes later, both Matt and Skylar, who had each read the comments, texted me variations of "BUY HIM A ONESIE AND TEXT ME A PICTURE OR DON'T BOTHER EVER COMING HOME." And I was like, "I'm already home. By myself." And they were both like, "THAT'S NOT THE POINT."

And so, the very next morning. A Friday morning. A work day. I found myself carrying a puppy around Walmart. WALMART, you guys. He was wearing a neck brace. I was in sweats and a t-shirt I had slept in. It was 10:00. And I was in the baby section, holding onsies up to my puppy and saying things like "will this give you enough room in the crotch?"

We selected a baseball onesie that said "little slugger" on the chest.

We picked this one, mostly because it also came with pants.

And I know. You think I'm cruel. But y'all. Mr. Doodle freaking loves this onesie.

We have to take it off when he goes out to go potty and when he comes back inside, he RUNS to me when I pick up the onesie, wagging his whole little bum. And then he forcefully sticks his head through the hole when I hold it out.

Also, the onesie completely stops him from licking.

AND, the onesie was $3 cheaper than the stupid cone!

Granted, I felt like an idiot pushing him around in one of those race-car carts in the power tool section at Home Depot yesterday. But only because we forgot his hat when we left the house the outfit looked incomplete.

Today I give you the next edition of The Lost Journal Series. March 14, 1995 (10 years old): If I had to disect a cat I would throw up. Even though I hate cats it would still be sick. I hate disecting things mostly 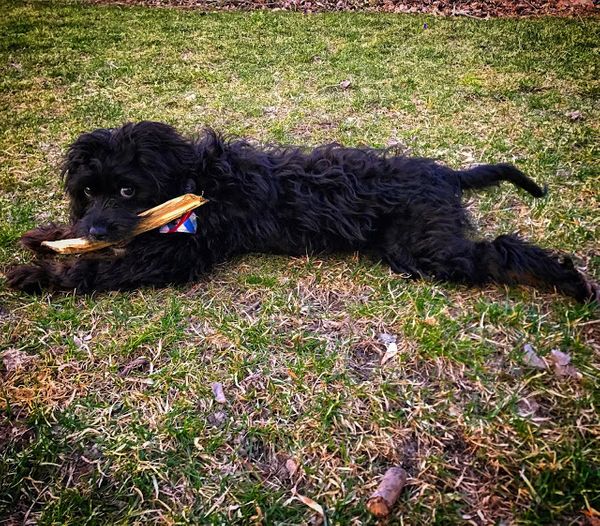 Duncan got neutered today and he's sitting next to me completely and totally high. Like, out of his mind high. He's been staring at his bone for 35 minutes without