Please check out today's episode of Strangerville, above (and at the bottom of this post, because we're persistent like that), featuring a story about what happens when pen pals don't end up murdering each other.

Also, don't forget that our Strangerville Live show is NEXT WEEK (March 30). Please get tickets at this link if you haven't already.

*****
You may recall that a little while ago TV lied to me and made me think that it was sufficient education for baking. I spent basically two full days trying to make a mirror-glaze cake from a British recipe that may as well have been written in another language.

Whatever I ended up with was definitely not mirror-glaze and it probably wasn't even technically a cake, and after that experience I decided that I would never bake anything ever again.


It was Anna's birthday and we were going to have some kind of celebration for her and all of the other tasks had already been called by various people and so, since I spent a small fortune on baking supplies for January's disaster, I thought it wouldn't kill me to give cake baking another try.

I looked up an American recipe online, wondering if this would make a difference for me. This time the recipe called for ingredients that I didn't have to google at the grocery store with the words "American equivalent" preceding them. And the recipe used units of measurement formally endorsed by CMT and the NRA, so I was pretty confident I could get this one done.

The recipe was for a three-layered chocolate cake. Not mirror-glaze, for that is Satan's work, but just a simple chocolate frosting. It also called for some candy work on top.

The candy work was supposed to be simple. Melt some sugar in a pan and then dip nuts in it. Use the remainder to make long strings and gently wrap those strings in a loose ball that would sit on top of the cake.

Within five minutes I had severe third-degree burns all over my right hand and there was a trail of melted sugar hardening into cement from my stove top all the way to the opposite end of the kitchen.

So the candy work was a bust.

But it was never going to be the star of the show anyway.

The cake. That was the part that mattered.

But I was all like, "it doesn't matter, Eli. Because you're going to put cream between each layer and then frost the Hell out of this thing and in the end no one will know the difference."

I thought that, because whenever something looks a little unpleasant coming out of the oven on the Great British Baking Show they're all like "we'll just cover that with frosting" and then they do and it looks so beautiful that it actually obtains world peace.

Well. I know I already told you this, but let me remind you: TV is a liar.

Because I put cream between each layer and then played this really stressful and messy juggling game where I was running circles around the cake to wipe up cream that was dripping out all over around the sides and it was somehow even more lopsided and finally I just go so freaked out that I shoved the whole thing in the fridge thinking that it would "set" and I don't know what that means or why I thought it but it definitely didn't "set" because when I opened the fridge 10 minutes later the layers had slid off of one another and were just in a messy pile at the back of the fridge and I had to grab them with my bare hands and try to slide them on top of each other while I reached for cocktail sticks with my bare toes so I could stab the cake in 9 different places to hold it together and the cocktail sticks were supposed to be used for the candy making process but they ended up being more helpful for engineering purposes and in the end my cake looked like this:

All I did was try.

And now, please enjoy this week's episode of Strangerville:

This time in Strangerville, two people fall in love from opposite ends of the Earth without ever seeing a picture of one another.

Pen Pals, By Mark and Marisa Sheldon (music by bensound.com) 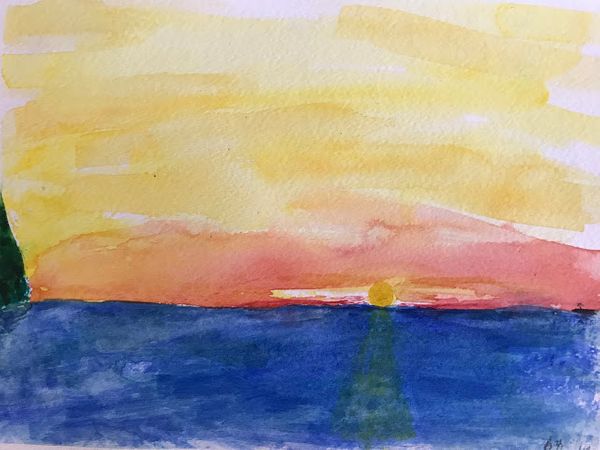 The water moved in and out. Slowly. Methodically. Miles of coral reef prevented it from forming enough critical mass to make waves. The sun was dropping down, settling into an

This time in Strangerville, two people fall in love from opposite ends of the Earth without ever seeing a picture of one another. Story: Pen Pals, By Mark and Marisa Sheldon (music by bensound.com) http://traffic.libsyn.com/strangerville/Episode_34_Pen_Pals_