My street is on a hill, which is a problem for three reasons:

1. Sliding past my driveway on icy days and having to circle the block multiple times to give it another try;

2. Losing balls that Duncan suddenly decides to set down on the ground mid-walk for reasons he refuses to explain to me;

3. The thing that happened on Saturday.

About three years ago I decided to base 100% of my self-esteem on my yard maintenance. This was a dangerous decision because a weed can send me to therapy now.

On the plus side, I can accidentally steal someone's car and get chased down by multiple employees of a car dealership and still think I'm a perfect human as long as my lawn is looking healthy that day.


And so, when two very large patches of grass on my front lawn looked like destroyed horcruxes after a long winter, I started to panic. The Suzzzzzzz recently got me to sign up for lawn services through her company by posting a comment on Stranger, making her the very first person ever to convince someone to do something in a comments section on the internet. And since I now consider The Suzzzzz to be the person to whom I should take all of my problems, I started texting her pictures of my yard with eleventy emojis that meant to communicate "FIX THIS."

She is so going to regret giving me her phone number.

The Suzzzzz sent someone to my house to check it out. They came out and looked at it and told me that it was difficult to tell what had happened and whether or not it could recover and so they suggested that I give it a little time and see what happens during the spring months.

It became apparent to me around last week that the problem was getting worse and so I finally decided to just bite the bullet and deal with it.

Skylar's dad is an agronomist, which is a real thing. I just looked it up. And so Skylar called him and got a laundry list of tasks, including digging out the grass and reseeding the area.

I had a lot of yard work to do, having done none so far this year, and so I started early Saturday morning gutting the flower beds. Skylar "helped." And by "helped," I mean "spent 5 hours weeding a very small area that was actually The Perfects' property while watching Erin Brockovich on his phone and occasionally yelling out 'you tell them, Erin!'"

He had connected his phone to some speakers, which he placed right in front of a window to a bedroom of one of The Perfects' children so that his profane film could loudly fill the child's head.

Eventually I made it to the front yard and started digging out a very large section of dead grass on a steep hill.

I had already filled my yard waste bin to capacity, and so I wandered down to Lynne's house and stole hers. Lynne was out of the country and I knew she wouldn't need her bin before trash day and we basically live in a commune together now, as half of my stuff is at her house and vice versa, so I didn't feel bad about the trespass.

When I rolled the bin up the hill from Lynne's house to mine, Skylar informed me that "the fuzz" had just come by and talked to him.

Skylar is terrified of police. He has never had a bad experience with a police officer and he has never broken the law, but he is terrified nonetheless. Thank God he is not a racial minority or he would probably have died of anxiety by now.

(Note: I am not making light of the very real problem racial minorities face in their systematic hostile treatment by law enforcement, which is pervasive and a great blight on our country. I am making fun of Skylar. So if you're going to get mad at me, just make sure you're mad at me for the right reasons.)

Skylar told me that the police officer told him he was looking for a disheveled redhead and he wondered if Skylar had seen this person walk by.

Worried sick that the officer was talking about me or Skylar, he probably-suspiciously informed the cop that no such person had ever set foot on that street and then he ran and hid on the side of the house, waiting for me to get back with Lynne's yard waste bin.

I started digging the grass out, filling Lynne's bin, remembering that I'm not meant for hard labor, etc., when suddenly a red-headed man who looked very disheveled suddenly appeared in my front yard.

He was wandering the neighborhood wearing sweats and he only had socks on his feet (no shoes). He saw me using a hose and so asked if he could have a drink of water.

I handed it over to him. He appeared to be coked out of his mind and he started rambling to me about how he had just had a brawl with someone and how the cartels were after him and he needed a place to hide and the moon landing was fake, etc.

I stood next to him, listening to this. Skylar stood 15 feet away, watching the interaction, smiling like we were at a neighborhood meet and greet.

Whenever the guy took a break from talking to put his entire mouth on the hose and drink a gallon of water, which was impressive, I would stare down Skylar with a look that meant to communicate "WHY HAVE YOU NOT CALLED 911 THE COP WAS LITERALLY JUST TELLING YOU THEY WERE ON THE LOOKOUT FOR THIS GUY."

Eventually Skylar understood telepathy and left the yard to find his phone and make the call.

After 15 or 20 minutes, the guy finally departed and went across the street to a parking lot of an ugly apartment complex where he said he was going to hide behind some dumpsters because my neighborhood is classy like that.

It took over an hour for the police to drive by again, which meant that this wasn't nearly the priority we thought it was. The guy was gone by then, although he appeared multiple times throughout the day, prompting Skylar to repeatedly call 911, because we're narks and we're not ashamed.

I don't know if they ever found the guy, but the point is that 911 has probably now put Skylar's picture up next to mine on their wall of "crazy busy-bodies who over-call 911."

Somehow, despite being distracted by unwittingly starring in Law & Order SLC, I completely filled Lynne's bin.

It now weighed hundreds of pounds, and it wasn't until this moment that I realized that I was going to have some trouble rolling it down the hill back to Lynne's place.

But I was all like, "whatever. I'm a strong independent man. I can do this."

As it turns out, I couldn't. Because as soon as I used all of my weight to get it to lean back onto its wheels, it launched itself down the sidewalk with me attached, screaming like I was in a life or death situation.

I rolled all the way past Lynne's house before crashing into a fence.

My yard is a pile of mud.

This time in Strangerville, a storyteller takes the stage at Strangerville Live to remind us that . . . most people are good. Story You Are Now in Paraguay, by Rachel Miller Production by Eli McCann and Meg Walter http://traffic.libsyn.com/strangerville/Episode_36_You_ 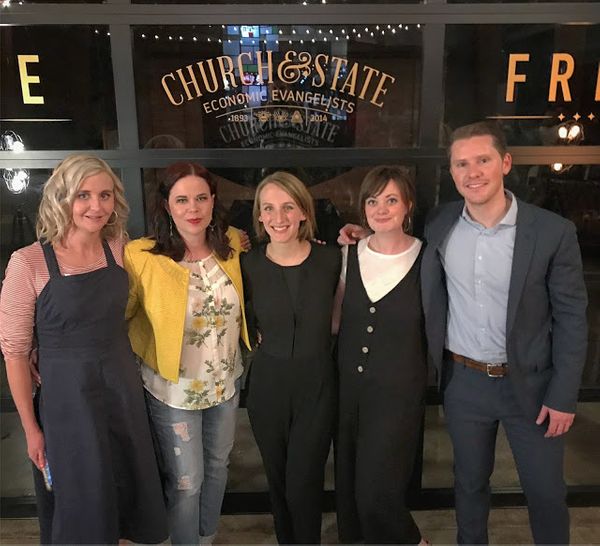 We got to the venue for Strangerville Live on Friday a couple of hours before the show started. Jolyn and a woman who works for Church & State started lifting