We booked the hotel because it advertised access to a "private beach." The beach ended up being more like a stone patio that dropped off into the Adriatic Sea. It was nice enough. A bit small. But Croatian coastal towns seem to be crowded this time of year, so any access to the waves is appreciated.

Skylar and I had wandered to the water in the early afternoon. The stone patio was big enough to contain about 50 lounge chairs, all huddled closely together.

We wandered past each, looking for one that had not yet been claimed. About half of the chairs had people sitting in them. The other half had been draped with towels, most of them hotel towels, like little flags claiming territory on the moon.

Not a single lounge chair was empty, so we eventually perched ourselves on top of an uncomfortable rock.

We baked there for 20 or so minutes. I continuously scanned the patio, hoping that someone would give up a seat. But the 25 people already sitting looked like they were about to start requesting that their mail be sent there. They weren't about to go anywhere.

I saw other groups of people enter the beach patio, scan the area looking for a free spot, and then depart, disappointed.

It was about this time that I noticed that the water area in front of the hotel "beach" was roped off from neighboring waters. And in our section of swim-able sea, there were only 2 people floating around.

I didn't want any trouble.

But this was ridiculous.

I had slightly more respect for the few people who had left backpacks or other personal items on the lounge chairs because at least they had accepted some risk in their claim-staking.

And so, even though I DIDN'T WANT ANY TROUBLE, I made an executive decision and removed two hotel towels from two hotel chairs and told Skylar to take the one next to the one I was claiming for myself.

It was freeing in a way. Like I was bringing justice to a tiny corner of Croatia.

I told myself that if someone showed up within the next 10 minutes, telling me that they just had to run to the bathroom and that this was their chair, I would have graciously conceded. I would have had a laughy conversation about how I wasn't sure if anyone was coming back and "it sure is a beautiful day!" as I picked up my things and moved one chair over and later that night we would get dinner together and one day at a party we would gather people around to tell them about this one time we had a misunderstanding on the beach and my new friend would be all "oh stop it! He's exaggerating again! I was not that mad" and I would be all "you sure seemed mad when you realized I had been wearing the sunhat you left there" and we would both laugh and everyone would really like me.

But the 10-minute scenario didn't happen.

No one showed up to tell us that we had take "their" chairs.

An hour went by. Then two. And I felt more and more validated in my decision to put these unoccupied chairs to use.

I fell asleep at some point, and I was somewhere in the middle of a dream when I felt a hand on my arm.

I opened my eyes and saw a very dissatisfied-looking woman in a sunhat. She had plopped down on the chair next to Skylar's. Skylar had left for a minute to get a drink and he had placed his backpack on his chair.

The woman pointed at the hotel towel, the one that had been on the chair when we arrived hours before and which Skylar had placed on the ground.

"That's mine." She informed me.

I pointed at Skylar's backpack and said "that's mine," because I thought maybe we were playing a game where we declared our possessions.

"This is my chair," she said, pointing to the one between us.

I was polite. I was not rude. But I did say to her, "I'm sorry. My friend is sitting here now."

She dropped the subject with me, understanding that I was immovable in my convictions. And she waited.

A minute or two later Skylar returned and took his place. The woman began her introduction anew.

"That's mine," she said, pointing to the towel.

"Oh? Do you want it," Skylar said, innocently retrieving the towel and passing it in her direction.

I couldn't believe she was trying to shop around for a different answer. RIGHT IN FRONT OF ME. And so I intervened again. I was still polite. But I more decisively told her, "I'm sorry. My friend has been here for over two hours. This is his chair now. There are many others here that seem to have been abandoned. Maybe you could try one of those."

To her credit, she didn't push back, probably because she knew that I was bringing justice to this corner of Croatia and she greatly respected me for it.

A few minutes later she gathered her things, said a polite "goodbye" to us (to which we responded with an even more polite "have a nice day!").

Another hour or so went by. The vast majority of the towel-draped chairs were still untouched. A couple of other justice-seekers had done what we had done, apologetically removing hotel property from hotel property and occupying the chairs that had now gone a good chunk of the day unused because some thoughtless people had tried to claim them with very little intention of using them.

We were just starting to gather up our books and flip flops and backpacks to head back to the hotel when a man, somewhere in his 50s, stomped up to us and started mumbling in our direction.

He reached under one of the chairs for a floaty that I hadn't noticed until this point, barking at us that he couldn't believe "that someone would take these chairs when they had clearly been saved."

By this point it had been well over three hours, meaning that this guy had left the area at least three hours before.

Meaning that he had probably plopped a hotel towel and hotel floaty on a hotel chair sometime that morning, expecting that no one would touch it for nearly the whole day while he went out doing Croatia knows what.

And I know. I should have let it go. We were leaving anyway. It didn't matter.

Except it did matter. Because justice, you guys. JUSTICE.

I was polite when I said it. "Well, we are actually just leaving now." He cut me off and said "ok. Fine. Fine. I guess it's fine."

"Sir, this is a crowded beach. How can you expect people not to use these chairs just because you threw a hotel towel on them and left?"

And then he said: "I saved this. I was only gone for a few hours."

I was still polite. I was using my polite voice. And most of the patio beach was watching us at this point, because it was turning into a bit of a scene and the entire area was the size of a Soviet postage stamp.

I said "well, that's not acceptable."

I know. He was probably getting pretty scared by this point.

He cranked up the sarcasm tone ten-fold, using a mocking voice and nearly yelling, "thank you for saving my chairs for me while I was gone."

And I know you guys don't think it sounds like he was being rude but that's only because you weren't there. If you had been there you would have seen the looks he was giving us and you would have heard the very aggressive tone he was using. It wasn't the polite-yet-decisive tone I had opted for in this situation. This man loathed us, and he was making it known.

I should have let it go, but I just couldn't.

So as he wrapped the floaty around his body, which I just realized, why did this man need a floaty, I stood in an indignant-looking pose, and called out to him, "you are being very rude." And when he didn't look ashamed enough, I said it one more time, a little louder for the people in the back.

He didn't agree with me. Instead he floated away in the water, refusing to make eye contact.

As we walked away, a nearby woman who had watched the whole thing play out gave me a supportive wave. I may not have saved the world. But I threw one starfish into the sea, and it clearly mattered to that one.

The universe has required me to take on a substantially larger share of sitting next to not-the-best seatmates on flights. I'm happy to do it. Sometimes. But not every time. It's like a curse. I see the 100-pound sensible-looking elderly woman with a tidy 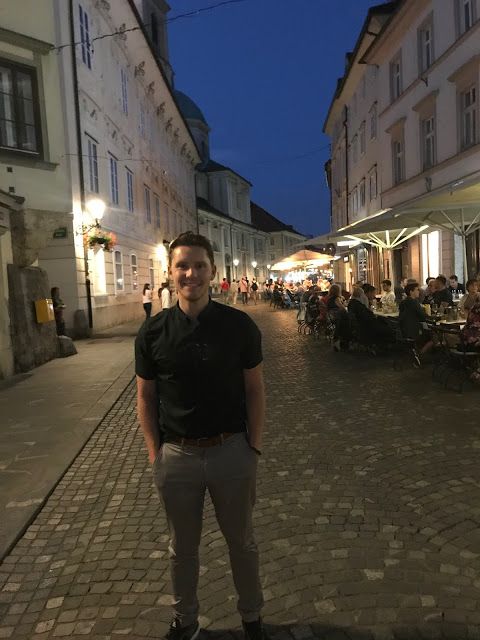 In Ljubljana Slovenia last night: Skylar: Here, give me your phone so I can take a picture of you. Eli: No. You're really bad at taking pictures of people. Skylar: