[Strangerville Live is THIS FRIDAY. Please get your tickets, if you haven't already!]

I think I may be the victim of the world's most elaborate prank. When Matt bought his house a few years ago I swear he promised me that we were just going to do a little remodeling. Since then, we have gutted so much of the house that I'm not actually sure there is a single original brick or piece of wood left.

The problem with being the silent brooding artistic genius that he is is that he's never satisfied with the way things are. "JUST LEAVE WELL ENOUGH ALONE" I want to scream at him every time he lets me know that he's torn down another wall or ripped out another light fixture or demolished his entire yard.

He knows what he's doing, so he's able to do most of the projects himself, which is good because he is satisfied with no contractor ever. I want to call and issue a warning to anyone he hires to help him.

"You can't get away with woefully sub-par work at his house like you can at mine," I would like to tell these people. "Matt's not the pushover you're talking to right now."

It's true. I've hired contractors before. They could literally burn my house to the ground and accidentally bring in a colony of rats and I would be like "THANK YOU FOR YOUR SERVICE HERE'S 12 MILLION DOLLARS."

Not Matt. He's not afraid to call the contractor up and tell him he needs to redo something that wasn't done well. I wish I could hire Matt to represent me in contractor situations for this exact reason. But if I did hire him and he did a very poor job I would be like "THANK YOU FOR YOUR SERVICE MATT HERE'S 12 MILLION DOLLARS."

Several months ago Matt called me and said he ripped out the stairs in his house.

As in, he no longer had stairs.

As in, there's just a giant hole where stairs used to be.

He has to use a ladder to get to his basement, where his laundry is. He climbs a ladder while holding a laundry basket. I don't know anything about the law, but I'm pretty sure he's violating like a thousand safety codes plus some of the Constitution.

I don't know what was wrong with the stairs before, exactly. Something about "too narrow" or "too wide" or "uneven" or "they were actually fine the way they were but I like projects so you can now kiss several of your weekends goodbye because I need help."

The stair project has been on the to do list so long now that Matt has earned like fifteen merit badges in ladder climbing.

A good portion of the delay is because he keeps starting other projects before finishing this one. "YOU NEED STAIRS" we screamed at him when he informed us that he had demolished the entire facade of the front of his house so he could rebuild it to make it prettier.

For real, though. He has transformed the front of his house. It used to look like this:

That covered front porch was FULL of scary dolls and porcelain animals.

But I really need to him to get back to the stairs now.

Mostly I'm just worried that I'm going to have to take care of him if he falls off the ladder and breaks a hip, which would ruin my life plan of him taking care of me if I fall off a ladder and break a hip.

Today we spent a couple hours sawing something and measuring sheet-rock and doing calculus and I think black magic to frame out the walls of the stairwell so we can finally add stairs.

If you aren't following it already, you should find broomebungalow on Instagram to see updates on his ten trillion house projects.

This time in Strangerville, Eli and Meg discuss what it’s like to be a BYU student. Also, a woman explains how her struggle with eating disorders inspired her to take on a whole system.

Music: Adventure, Darling by Gillicuddy From: The Free Music Archive 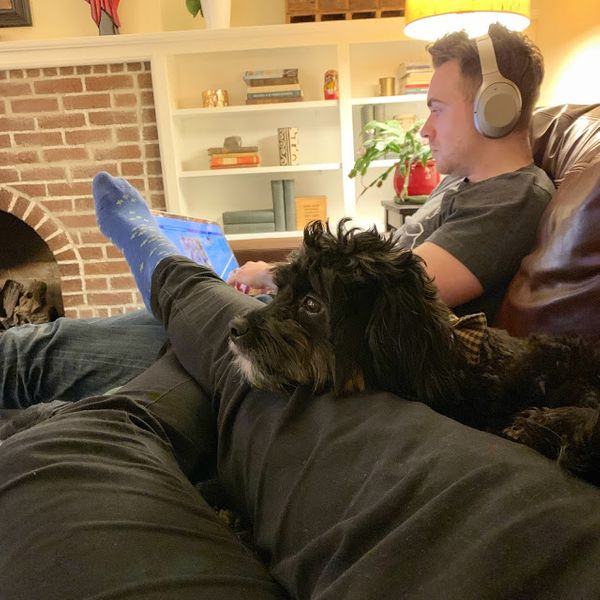 Skylar has some big test this Friday and I've got Strangerville Live on Friday and both of us have been wandering through our lives like zombies for about two weeks.

This time in Strangerville, Eli and Meg discuss what it’s like to be a BYU student. Also, a woman explains how her struggle with eating disorders inspired her to take on a whole system. Story SoulPower, by Tileah Patterson Music: Adventure, Darling by