I know this is the last thing I need in my life right now, but you guys.

On Sunday Bob and Cathie drove me and Skylar and my sister Krishelle to the great northern tundra that is southern Idaho to pay respects to deceased family members. My mom's parents both grew up around that area. I had never before been because we don't really have family up there anymore. At least none that we know.

My grandparents got married and moved out of the area, eventually settling down in a Southern California desert that is so hot you can see it from space. My grandma still has some cousins or nephews or friends she met at girls camp or what have you in the area, but my family is so huge that it's not really possible to keep track of anything beyond immediate family. I know I've told you people this before and you didn't believe me, but I have over 70 first cousins. FIRST cousins.

So, no. I don't know my second cousins or what they're up to or what Hogwarts house they belong to (Hufflepuff, all of them, I'm sure).

Nonetheneverthelesswithstanding, I've got ancestral homies buried all over that place and since I had never been my mom decided we ought to take a drive to lay flowers on their graves because we're respectful like that.

What I discovered as we entered what I am told was a town called "Mink Creek" is that this area--the area from which my grandparents availed and which they have kept from me for 35 years--is the most beautiful place I have ever seen in my life.

Mink Creek is buried between two breathtaking mountains and everything in town is built on the sides of these mountains so you look across to your neighbor on an opposing mountain and moon them or do Morse Code with the blinds to signal that the feds are coming or whatever they do up there.

It looks like Switzerland, but without the Disneyland tourists in line for the Matterhorn.

The only thing I previously knew about Mink Creek is this horrifying story my grandma told me about a ghost man who choked people in one of the old farm houses and it later turned out the ghost was a Danish immigrant who had been murdered by the homeowner and buried in a nearby desert and my grandma remembers seeing people in town with bruises around their necks from the ghost AND I WAS SIX WHEN SHE TOLD ME THIS.

I just realized that I've never in my life actually fact checked this story so I went to google it and after I typed in "Mink Creek" google immediately completed the search with "ghost story." There are tons and tons of links to various ghosts that apparently all live in Mink Creek. But I did find this one link that, while sparse with detail, is pretty close to the story grandma told me.

Anyway, so as we drove through this unbelievably beautiful and TERRIFYING place, my mom suddenly pointed out a farm house up on one of the mountains and said that my grandma grew up in that house. We drove to it. It's unoccupied, but apparently owned by my mom's cousin.

I wandered around the outside and then eventually found a door that was unlocked so I let myself in LIKE A CRIMINAL AND I'M NOT EVEN SORRY and I went on a self-guided tour of the incredible place, including the bedroom my grandma grew up in.

My grandma is 89 now, and tech savvy, so I texted her a picture of the bedroom and asked whether it looked familiar to her. She responded "Oh my goodness! That looks like the window I watched the full moon rise over the beautiful mountains to the east!"

And look. I'm a sucker for good imagery and compelling storytelling and family history. So as I stood in that bedroom and looked out the same window my grandma looked out of 80 years ago during the same time she was regularly seeing ghost bruises on her friends I got ALL kinds of chills and the next thing I knew I was texting pictures of this house to Matt and asking him if he could fix it for me.

As I was contemplating my new future, a little truck with two women pulled up outside. I figured they were probably relatives of mine. They had come from the house just up the hill that my mom thought belonged to her cousin's son.

The women found Skylar first and asked him who he was.

Side note: we call my grandma "Nonna." "Nonna" means "grandma" in Italian. I don't know why we call her this. We are not Italian. But that's just what we call her. We even had a custom license plate made for her that says "Nonna" plus whatever the current number of grandchildren she had at the time ("Nonna 32" I think?).

Apparently Skylar thought Nonna was her first name and that we all call her by her first name, because as the women approached him to find out whether they needed to shoot us, he loudly and confidently announced, "DON'T WORRY. WE'RE RELATED TO NONNA. NONNA WHITTLE."

Whittle is her married name so it equally has no meaning for these people. My parents approached a minute later and clarified the family connection and chatted for a while.

It's been three days and I can't get this house out of my head. I so don't have the capacity to deal with a massive remodel project over two hours away from where I live and I don't even know if anyone is interested in selling the place.

Are we sure I shouldn't look into this? 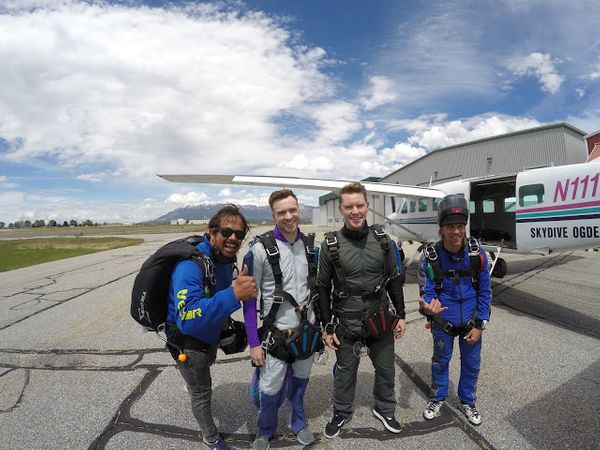 Skylar told me he had a surprise for my 35th birthday and I was exceptionally concerned about this because look. I love that man. But, his surprises are sometimes terrifying.