This time in Strangerville, Salt Lake City will give you a giant flag to help you cross the street. And then a story about fixing up an old bicycle (written version below).

Skylar just walked into the house. His face is red right now because he just climbed off of a bike. The bike was my dad’s a long time ago. He said he purchased it when he was younger than I am now, but that’s impossible because he has always been over 60.

My dad bought the bike as he was graduating high school in 1968. It cost him $400. I know those details, because he has made sure I’m clear about them the dozen times I’ve mentioned the bike to him in the last three years. He smiles when he says it, raising his eyebrows a little, and nodding. “$400,” he repeats, somehow emphasizing every syllable in perfect equality, “in 1968.”

It weighs at least 40 pounds. I first saw him ride the bike twenty or twenty-five years after he bought it. I was a child and had a bike of my own. It had a black frame and red handlebars. I believed this color combination made it go faster. The top tube was covered with Ninja Turtles print padding, which I had sloppily fastened to the frame with Velcro. It had a kickstand that I never used at all and a bell that I used a lot. My bike wasn’t worth $400, or anything close to it—not in 1968 or in any other year.

Dad’s bike didn’t look like a recreational vehicle to me—more like a medical torture device. The seat was high, high enough that he groaned when heaving his leg over the frame to mount it. He folded his body more than in half to slide his hands down the curved horn-like handlebars so he could grip the brakes that screamed a high F sharp against the dusty rims when pulled.

He rode it a lot. Then he rode it sometimes. Then he didn’t.

After that, the once-green grease collector with its “Tour de France” sticker branding the down tube hung on a red hook my dad twisted into a ceiling beam in his garage. The bike stayed there, its front tire dangling just inches from the windshield of the parked car below it.

It swayed in that spot, ever so gently. One decade. Then two. The tires sagging with gravity, having long ago deflated, made the wheels look like slowly-rotting fruit.

The bike didn’t look any better when I saw it in a pile of old furniture and clothes, sitting on the driveway at the front of my childhood home. It was waiting there to be transported to some sad place where a person might pick it out, pay a fraction of its worth, and keep it, not knowing that my dad used to fold his body more than in half to close his fingers over the handlebars and grip the brakes.

Scavengers might even strip it of its individual parts that don’t mean anything other than money and use without the whole. They might pry the serrated pedals from it, dangerously spikey and sharp enough to grip worn rubber shoes like the hands that gripped the brakes in relentless competition up above. They might twist and pull off the black leather seat, only slightly indented from teenage rides with friends, then rides to college classes, then rides with a wife down a spotless street of symmetrical starter-homes, then rides with children, then finally coated with the dust of disuse.

“What are you thinking?” I told, more than asked my dad.

“I haven’t used it in years, and I’m not going to be able to use it now. Maybe someone else will want it.” he explained to me, tossing some old tools from a red toolbox to the same pile where the sad bike sat.

He and mom had bought new bikes. “Bikes for old people,” he called them. They planned to tour the neighborhood on the more comfortable seats, wider wheels, higher handlebars, and lower frames.

He was right that someone else would want the old bike, or so I told him in a huff as I heaved the medieval weapon of war into the back of my Subaru Outback, avoiding the serrated pedals with my hands that were already smeared with dark black grease. “Well if you don’t care enough to save it, I will,” I shouted to him as the edge of his mouth quivered upward against some concerted resistance, his arms folded, his stance stationary.

“If it means that much to you,” he said, flicking his left hand in the direction of the bike, his voice trying to sound casual.

I took it home, where it sat for two years. In a different garage. With different dust. With at least hope for a meaningful future with someone who knew its past.

“We could actually fix that up,” my friend Emily finally told me when she saw it there. Emily had recently gone about saving vintage abused bikes like it was the reason she had been put on this Earth. She patrolled yard sales and rescued old frames and serrated pedals from people who decided they didn’t have use for them anymore. Emily and I heaved the bike, again, into the back of my Subaru and hauled it to her garage where a handful of shiny frames on sparkling wheels hugged by inflated tires perched on their kickstands in a proud line, like anyone might if given a second chance at life.

We pried the hornlike handlebars from the frame. Then we twisted off the indented seat. Then the serrated brakes. Then the dusty wheels with their droopy tires. We pried off piece after piece until the bike didn’t look like a bike anymore, but instead a pile of useless scrap metal.

We dipped the objects into buckets of warm soapy water and we scrubbed them with brillo pads, using a little elbow grease to remove the bike grease, breathing new life into the parts until the pile of useless scrap metal became shiny. Pretty, even. We gently picked away at the dust and dirt, so embedded in the frame that it was hard to decipher what color the bike might have been in 1968. It slowly turned green—a happy green. The brittle wires were replaced with strong cables that came in sleek packaging from a store where tanned young people wearing sophisticated watches work. We labored until the clean pieces were fully reassembled. Plump tires and a sturdy kickstand propped the bike up in the line of its contemporaries.
We fixed it up so Skylar could ride it to school. That was the new use it would get, anyway. But I guess it wasn’t the reason we gave it a facelift. We really fixed it up because not fixing it up seemed disrespectful somehow. Like we would be telling it its life didn’t matter—our memories of it didn’t matter.

“Want to see what we did with your old bike?” I pulled out my phone to show my dad a picture. He furrowed his brow and cocked his head a little, and then slowly nodded, remembering that I had taken it.

Dad retrieved his glasses from his shirt pocket, unfolded them, and slid them onto the end of his nose.

He held the phone up close to his eyes, and then far away, squinting a little, and then finally smiling. 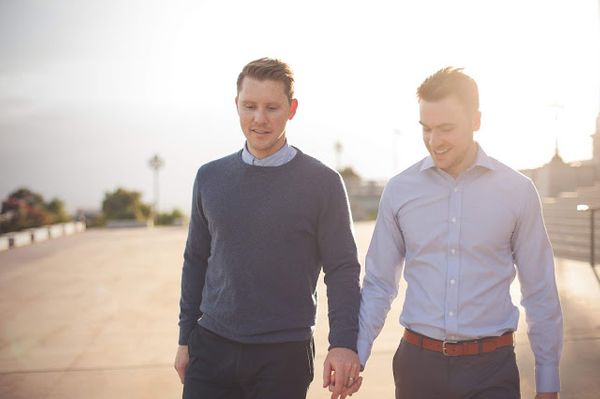 It just occurred to me that probably no one is going to object at my wedding this week. I bet not one single person is going to emerge from the

This time in Strangerville, Salt Lake City will give you a giant flag to help you cross the street. And then a story about fixing up an old bicycle. Story In 1968, by Eli McCann Production by Eli McCann & Meg Walter http://traffic.libsyn.