The most stressful place in the entire world is the inside of every airport. I just looked it up. There are 40,000 airports on Earth. That means there is a 40,000-way tie for "Most Stressful Place." That is a crazy big tie. This should be reported on more in the news. Shame on journalism that this is the first time you guys are hearing about this. FROM A MOMMY BLOG.

I discovered this fact the first time I went to an airport and saw a man sprinting through it crying. A GROWN MAN. Sprinting. Crying. I didn't know him. I was like 7 and we had gone to the airport to say goodbye to one of my 73 cousins who was leaving for his Mormon mission that month.

This was back before security is what it is today. Back when they would hand you a rifle as you walked through the front doors just as a party favor for coming to the airport. Then security would high five you and slap your butt on your way to the gate even though you didn't even have a ticket. They would put a knife on every seat on the plane as a practical joke.

But even then. Even back when they didn't treat you like the only reason you could be flying somewhere was to commit a high crime and misdemeanor like they do now. Even back at that time it was still stressful enough to make some grown man sprint through the airport, openly crying.


I assume he was about to miss a flight to something important. Either that or he just really hated running. Either way: STRESSFUL.

From then on I always knew the airport was not a happy place.

There was the time I left my bag unattended while I went to the bathroom just two years after 9/11 and the entire FBI and KGB swarmed my gate and made me pull out every item of underwear one-by-one and shake it out in front of the entire plane of people I would be with for the next five hours.

Or the time I got to the gate in Amsterdam and they couldn't print out my ticket and said I had to go back to the opposite end of the airport, which is normally a 30 minute walk and I had to board within the next 15 minutes. I was wearing flip flops so I took them off and sprinted the entire way completely barefoot and then cut an entire line of people so someone could print off my ticket and have me sprint all the way back and dive through the doors as they were closing them like that scene from Indiana Jones.

Or the time I was supposed to take my friend Matt with me to Ukraine, a place that was absolutely not tourist friendly in 2011. We had flown to New York separately and we were going to fly to Ukraine from there together. When I got to the airport the airline had no record of me. Matt got on the flight, expecting me to show up. He ended up flying to Ukraine by himself. I had no way to communicate to him where I was or what happened to me. I ended up getting sent to Russia on a different flight where I got another flight to Ukraine and showed up 7 hours after Matt to find him just hanging out in the airport wondering if he should plan to get a job at the airport cafe and live there.

With that kind of history, I now find myself on the verge of a panic attack every time I even see an airport.

Skylar is different. He doesn't do this. Skylar is not intimidated by the likes of airport.

Back when he had a job and wasn't My Greatest Liability, he flew so much for work that he technically owns Delta now. He's basically a celebrity of the sky. When he walks into any airport in the United States someone immediately shows up to place a jeweled crown on his head and a sash over his shoulder that says "QUEEN FOR THE DAY."

Skylar literally leaves our house to go to the airport less than an hour before his flight departure time. He hates waiting inside the airport. He thinks the right way to do travel is to time your airport arrival so that you walk to your gate just as they are closing the door.

You're supposed to get to the airport so early that by the time your flight leaves they have built a new airport around you.

What this means is Skylar and I travel together only with great consternation. I demand we leave for the airport early. He demands we don't. We end up going just early enough to annoy him but just late enough that I'm still panicked. See, THAT WAY WE'RE BOTH UNHAPPY!

But in Taipei Taiwan last week, we were both on the same page.

We had flown out of Palau. It was a four-hour flight to Taipei. Our Taipei layover was just over an hour and since that airport is the size of a small country, we knew the connection might be tight.

My sister was seated near the front of the plane out of Palau and since we didn't yet have our physical tickets or seat assignments for our next flight, Skylar asked her to just run to the gate and not wait for us so she could try to get them to assign us to seats together on our flight to San Francisco.

The plane landed in Taipei and she took off. Skylar and I got off of the plane five or so minutes later.

And that's when we discovered that the Taipei airport is an actual labyrinth.

We checked the monitors and found a handful of flights going to San Francisco at the same time. I guess we misread the board because we somehow ended up walking for a full eternity through this airport and through multiple security checkpoints before reaching Not Our Real Gate.

Somewhere along the way we discovered that the gates didn't have ticket agents like airports in the US. Just security personnel checking documents. This meant that there was some other place where one was supposed to obtain tickets before even getting to the gate which we couldn't find anyway.

And now we had about 30 minutes until our flight left.

The more we panicked, the more we ran. We ran every square inch of the airport. We even ended up working in a control tower at some point. I sent planes to entirely the wrong places. An entire airplane of passengers who were just trying to go to Disneyland are currently sitting in a Vietnamese prison.

Somewhere along the way Skylar finally stopped and yelled to me, "I'm done with this. If we're going to miss our flight, we could at least not also have to run." Which was an interesting thing to find out about my husband's logic.

We finally found the right gate and I pleaded with the documents person to help us, which she did by sending us down some stairs to the mob boss in the airport basement who apparently had the authority to cut us some tickets on the fly.

Look. This is where Eli and Skylar are truly two different people.

Skylar, on the other hand, upon finding out the sky is not falling, will immediately ask the person who saved the sky whether they can also give him a massage and ten million dollars.

I'm not sure if this analogy is making any sense.

The point is, I was just grateful to get any seat on any plane after the whole labyrinth fiasco. And I was already holding out my hand to get whatever pittance the mob bosses wanted to offer me. But Skylar, who was still breathing heavily, with his hands on his hips, was like, "it's our honeymoon so if you could put us together in the best possible seats that would be great."

Eye on the prize.

The mob bosses found two seats together, two middle seats, and told us this in a tone like they were excited to help us. Skylar immediately sighed, rolled his millennial eyes YES I SAID IT, and hissed "MIDDLE SEATS?" like they had just slapped his children.

I pulled out my best Cathie McCann and said "you apologize to these nice people and tell them thank you!" which he then did (he later thanked me for doing this and said he got "caught up in the moment" and felt bad that he seemed ungrateful).

The mob bosses laughed, probably because we just proved to them with that little exchange that we were actually married and not just making this whole thing up to get better seats.

We finally found my sister who was sitting calmly at the gate, ticket in hand.

We asked her if she had had as stressful of an experience as we had.

"No. Guys. The transfer desk to get our tickets was right next to where we got off the plane. I've been here for like 40 minutes."

This time in Strangerville, Eli agonizes over how to come out to the dentist, Meg steals from a movie theater, and a nostalgic walk through some complicated religious memories. Story “Space Jesus” by Eli McCann (music by Benny Martin Piano [https://soundcloud.com/bennymartinpianist/ 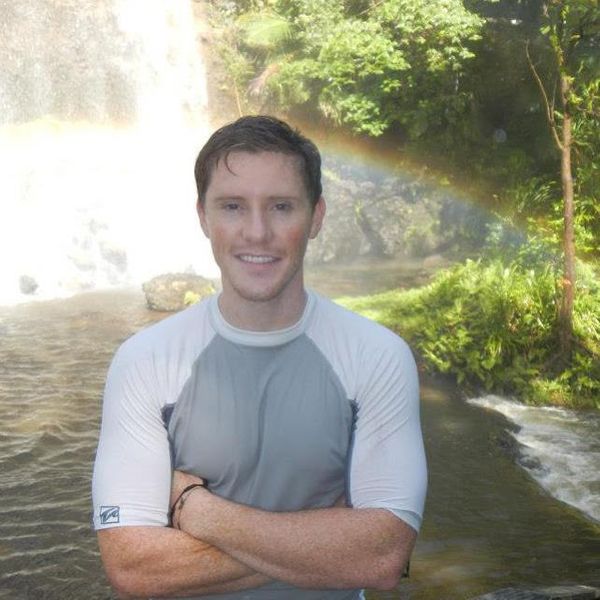 I walked out onto the beach. It was sunny, already pretty warm even though it was only 9:30 AM. There aren't waves in the water in Palau. Not really.