Yesterday we were woken up by an earthquake, which, in case you've never experienced this, is a super crazy way to start your day.

It happened at some ungodly hour, like 7:00 or something. It took me a few seconds to realize what was happening. There was this very loud rumble and the whole house seemed to be rocking.

Before I could say a word, suddenly Skylar, who was apparently now awake, flew out of bed and screamed "OH GOD IS THIS AN EARTHQUAKE." Then he ran through the house screaming the F-word, which is a very funny thing to hear come out of a person's mouth when that person's typical swear of choice is "ah fiddlesticks darn fudge monkeys!"

I don't know how long the earthquake lasted, partly because I was asleep when it started. In my memory it simultaneously was over in a second and took the entire morning. Apparently it measured at 5.7.

Somehow nothing in our house fell or broke. I honestly have no idea how that was possible. The light fixtures in our kitchen and dining room were swinging like a straight couple in Draper. A few things on shelves moved closer to the edge. But otherwise, nothing.

It's really hard to explain what it feels like to wake up to an earthquake while on lock-down because of a worldwide pandemic. The whole rest of the day felt like a weird dream. We kept having aftershocks, and knowing that another one could come at any second sort of put the town on edge.


Duncan was quietly concerned. He spent the entire morning climbing onto our laps and curling up into a little ball, which was far and away the best thing to come out of all of this.

BUT MORE IMPORTANTLY, I have been ATTACKED by my husband! You know--that man who promised before our family and friends and the entire cast of Cats to love and cherish me for eternity.

A couple of weeks ago I saw an ad for this jacket. It popped up on my Instagram and I clicked on it, so yes, I'm the reason we have those ads. It looked very different and I guess I was in a creative and brave mood so I up and ordered it, fully understanding it was something of a risk purchase.

But I really thought it would arrive and everyone would be so impressed with how fashion forward I was. I tracked that package for two weeks. I don't know why it took so long to arrive, but it did. And it finally came two days ago.

I was feeling so cooped up and tired of social distancing when it arrived so it really couldn't have come at a better time. I was so excited. I tried it on, walked into the kitchen to find Skylar, and said "well?! What do you think?"

Skylar looked at me for one second, smiled, and yelled "Oh wow! I didn't know I married Rachel Maddow!"

I guess I can't pull something like this off even in the middle of a pandemic earthquake.

This time in Strangerville, Meg and Eli are practicing social distancing. And a woman takes the Strangerville Live stage to tell the story of her first real kiss. Story: First Kiss, by Mara Lefler Production by Eli McCann & Meg Walter http://traffic.libsyn.com/ 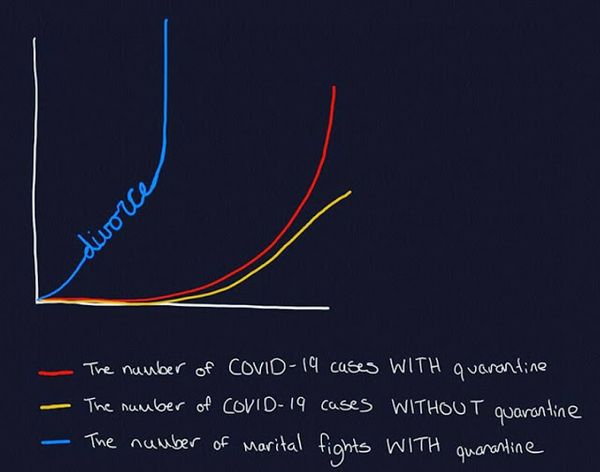 Skylar read some advice on the internet for couples who are now stuck at home together all day. It said to come up with an imaginary coworker and blame everything