My most vivid memory from my entire childhood is stuffing my face into a giant green pillow in the basement during canning season as the house would fill with overpowering scents of dill and tomatoes and MSG. I hated it. For a long time, I hated it. Then something happened to me that I don't think has ever happened to anyone else: I became my mother.

Now, each summer and fall I can eleventy thousand jars of shit in an ongoing game of "What Won't Skylar Eat." I currently have enough untouched applesauce on my basement shelves to reverse climate change. The pickle situation is even more dire. After canning SEVENTEEN quarts of pickles last autumn I learned that 50% of my household hates pickles.

The one exception to our wasted canning so far is my momma's spaghetti sauce. This was a staple in our house growing up and truly, Cathie McCann should be awarded a Nobel Peace Prize for perfecting the recipe. Each year I can exponentially more of this stuff. We go through about a quart a week, using it for spaghetti, lasagna, homemade pizza, chicken marinade, acid reflux disease, neighbor gifts, etc.

And now you can make it, too! Ingredient list and semi-profane step-by-step instructions below.

1. Carelessly wash your tomatoes by running them under cold water for like 2 seconds and then convince yourself with no evidence that someone else probably washed them already.

Pro tip: Try to grow these tomatoes yourself, get into daily fights with your spouse about who is responsible for killing all the plants, and then graciously accept a large bag of tomatoes from your perfect next-door neighbor who innocently laughs as she passes them over the fence and says "we just don't know what to do with all of these! We hardly paid attention to them this year and now we have so many tomatoes we're practically drowning!"

Pro tip number two: Yes, that is whiskey in the top right corner of the picture. It's 11:00 AM during a pandemic somewhere!

2. Blanch the tomatoes by throwing them in boiling water for three minutes. Badly burn yourself and scream the f-word repeatedly while doing this.

Pro tip: I usually cut a small cross into the base before blanching so the skins will come off more easily and just in case God is watching.

3. Throw the tomatoes into a bowl you have way overfilled with water and ice. Put a rag next to the bowl as your only effort to clean up the mess. Have husband yell at you later.

Pro tip: pretend the tomatoes are Titanic passengers waiting for the empty life boats to come rescue them. Name two of them Jack and Rose. Cry a little.

4. Due to your impatience, remove the tomatoes from the water by hand before they are cool enough to handle and pull the skins off to discard. Scream more f-words as you throw the scalding hot skinless tomatoes into a blender to puree.

Pro tip: If you repeatedly do a crappy job cleaning the blender, my husband will demand you just leave it for him to clean "because I'm sick of being mad all the time when I pull it out to use it later."

Pro tip number 2: Bake a large frozen pizza while doing this (see top left of picture). When husband says "is that what we're having for dinner" laugh and then say "this is what I'm having for dinner."

5. Chop an onion as inefficiently as possible because you have now gone 36 years without educating yourself on proper onion-chopping techniques.

6. Do the same with a green pepper. Eat most of it as you go. Pull out the backup green pepper you bought because you knew this would happen and chop that one up.

7. Throw the sauce, onion, and green pepper into a very large pot that you're pretty sure you stole from a roommate 8 years ago but that's what he gets for getting married and moving out and finding a drug-addict kleptomaniac to replace him in the apartment, Matthew.

Pro tip: Listen to old episodes of Strangerville while you do this because Meg and I have repeatedly made the top 100 sexiest voices over 30 list in Pakistan.

8. Add the minced garlic. Question whether peeling, mincing, and then cleaning the bits out of this damn thing make fresh garlic worth the effort.

9. Add all the other ingredients besides the vinegar and flour. Carefully measure the ones that sound gross, like taco hot sauce and mustard powder; dump the rest in with reckless abandon.

10. VERY CAREFULLY MEASURE THE VINEGAR BECAUSE I'M PRETTY SURE THIS WHOLE RECIPE WILL KILL YOU IF YOU GET THIS PART WRONG. Eli is not responsible for the death of any person who uses this recipe.

Pro tip: Use this carton of vinegar that has been in your pantry for at least 5 years and maybe much longer because you're pretty sure you've never bought vinegar before, and yet, here it is. Avoid googling whether expired vinegar is ineffective at preventing botulism.

I don't have a picture of this because a watched pot never boils or something so here's an actual photo of the exact moment I found out I was gay.

12. Combine flour with a little cold water to make a thin paste and pour it into the pot very slowly while stirring constantly. Bring to a boil again and stir until thickened. No, I don't know what "thickened" means. I suggest calling my mother when you get to this part to say things over the phone like, "wait, what do you mean 'like a sauce but not like a paste?'" Her number is 801.665.NICE TRY SCAMMERS.

I just noticed the other creepy ghost people at the right of this picture.

13. Pour the sauce into sterilized jars, spilling everywhere along the way. I don't know what sterilized means.

Pro tip: Misplace your plastic funnel every single year so you have to buy a new one and then at the end of canning season remember that you always put it in that one cupboard in the kitchen no one can reach. Now that cupboard has seven identical plastic funnels in it.

14. Process the jars for 10 minutes. And when I say "10" I really mean "15" because whenever I do 10 minutes I have problems and then my mom is like "the problem isn't with the recipe" and then her voice trails off because she's too polite to finish that thought.

15. Leave these jars on the counter for like 2 hours longer than my mother says it should take for them to seal because "mine always just seal right away so I don't know why you keep having this problem. Also, son, do you really have to swear on your site? I really think your writing is better when you don't swear."

In the name of my polygamist Mormon pioneer ancestors amen.

This time in Strangerville, there are dead rats, Meg misses movie theaters, and Eli takes the Strangerville Live stage to tell a story about his arch-nemesis at the gym. Story The Gym, by Eli McCann Production by Eli McCann & Meg Walter https://traffic. 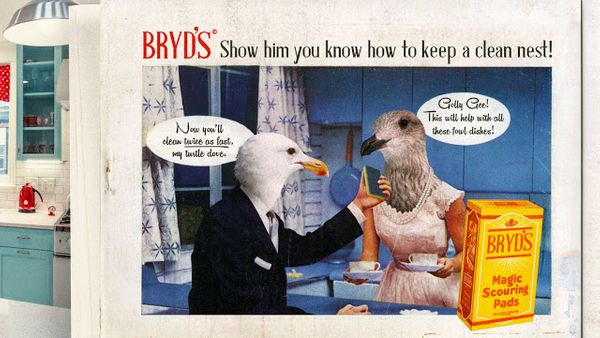 This video comes with a written warning, and it’s also narrated by a stern man’s voice. I have read this thing like 40 times and I still don’t understand what the hell it’s trying to say.