Skylar has been begging me to get a new phone since before the war. I don't know how long it's been since I've upgraded, but apparently "too long," or so he told me recently when he held my current one up and pointed out that it was cracked all over. "You even shattered the back? I didn't know you could do that!"

So he finally got on the internet the other day and ordered me one. Some fancy shmancy new iPhone that is exactly like my previous iPhone, as far as I can tell, except now I have to put in my passwords, none of which I even remotely remember, on all 600 apps I use.

The phone was supposed to arrive in mid-December, which was fine with me, but Skylar was not satisfied because "I want to play with it!" So he did some research and found out that if he ordered it through Verizon instead of Apple, it would show up more quickly, somehow.

He cancelled the original order and bought the damn phone again through Verizon and told me I'd be getting an email from the company saying it was ready for pickup at the store near our house.

Two days went by and my husband, who is apparently not patient, called Verizon to ask them if they had one in stock that I could just come and get, even though they hadn't yet emailed me.

"The woman on the phone said you can go in now and get it." I got that text while he was supposed to be off at his rotations where I had been previously and consistently told he can't check his phone "so that's why I'm unresponsive during the day."

I was so sick of the whole gd phone situation by this point but I obeyed his implied command and drove to the Verizon store to pick the damn thing up.

When I arrived a woman asked me what I needed so I explained I was there to pick up my phone. She responded "we don't have one for you" without even asking my name.

I told her I had an order number if that would be helpful. She said it would be and told me to read it to her. We were not in front of a computer. We were standing at the entrance to the store. The order number was 15 digits long. I read them to her while she stood and stared at me. The moment I finished reading them she said, "yeah we don't have that," as if I couldn't have noticed she didn't actually type that number into anything.

"Well, my husband called this morning and he said a woman told him she would set one aside and I could come pick it up."

"Oh, he probably talked to Sarah. She's an idiot. Like, seriously. Her life is a mess right now. You don't even want to know."

Obviously now I was invested.

This employee, whom we'll call Megan, welcomed me to a desk where she sat down and called her manager, who was in the next room over and whom I could hear clear as day. They did not need to be on the phone for this conversation.

Megan and the manager determined that they did in fact have the phone in stock but they couldn't give it to me because when you buy one online the City of Oz or whatever sends you a specific phone. The ones in the store are only for walk-in purchases.

"We can just cancel your online order and sell you one here," Megan told me.

"No, that's ok." I responded. "I don't mind waiting for the one I already ordered in the mail."

"No!" she yelled. "If we do it this way I get a commission! Please can we just cancel your order and have you buy it here?"

"That's fine," I responded to this corporate nonsense, trying very hard not to be a Karen because I've worked for large companies with ridiculous policies before and I know what it's like.

For the next 90 minutes Megan and I went about canceling my order, trying to set up a new phone, erasing my old phone BEFORE WE FINISHED SETTING UP THE NEW ONE, and putting on some protective shield that I was told I had to buy for some reason.

At one point a blonde woman with her sleeves pulled over her hands walked in.

"Hey! Get over here!" Megan barked at her.

The woman walked to us just as Megan gestured to her and said "this is Sarah, that idiot I was telling you about earlier." Sarah snorted what sounded like an entire bucket of snot back into her nose underneath her mask. "Hi," she said.

It became apparent at this point that the glass screen protector thing Megan had installed was not sticking to the phone. "Fix this," Megan snapped at Sarah. "I can't do it. Because of my nails." Megan then displayed her recently-done manicure at us. Each finger had been topped off with snowflakes, which honestly felt optimistic and lovely to me in a way I can't really explain.

Sarah began vigorously rubbing her hand sleeves onto the phone with such forced that I thought there was at least a decent chance she'd conjure a fire. Ultimately she handed it over to me. "Hopefully it will just seal with time," she said, in the tone of a surgeon trying to break the news that the procedure didn't go quite as she planned.

It was at this moment I was sent out the door.

"WAIT!" Sarah yelled at me.

I stopped. She came over.

"You're going to get a survey emailed to you asking you to rank us on a scale from 1-10. Please give us a 10. Otherwise we don't get paid. Like, seriously. Verizon will freak out if you don't give us a 10."

I drove home. A quarter of my contacts have somehow been deleted. The special glass protector thing has already peeled off.

The survey was emailed to me today.

You think I'm going to side with Verizon Communications, Inc. over Megan and Sarah?

P.S. I talked Sky into letting me put up our Christmas lights this weekend.

This time in Strangerville, Eli urges you not to take prescription medications that aren’t for you. Meg agrees, and is disappointed. And a roll down memory lane in Utah’s musty skating rink. Story Classic Skating, by Eli McCann (music by Gillicuddy) Production 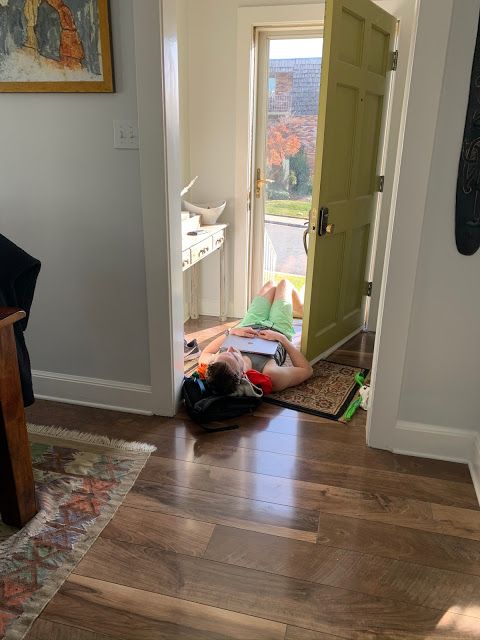 My phone starts buzzing. It's Skylar. It's 4:00 PM. The fact that he's calling me at this time probably means he finished his rotation early today. I answer. "She