Look. You know me. You've been reading this site since you were mumble mumble years old. Since back before the war. Since the days of Blockbuster and Myspace. You used to read this site gulping a Surge and listening to Alanis Morissettes's's's new album.

We go way back, you and me and you and so forth. We go back so far we need a chiropractor to fix it. That joke probably doesn't make sense, but we are so bonded together that you didn't even question it and in fact found yourself suddenly ready to fight anyone who planned to come at me in the comments. And we're so tight that you don't even care about that fact that I censor that crap and don't allow negative comments here because I'm blogger's deep state.

So, since we are so bonded together, you are 100% ready to side with me in my absolute rage at my husband, who, as you know, swore on his eternal soul to worship and serve me, and he swore it IN FRONT OF THE PEOPLE WHO USED TO CHANGE OUR DIAPERS at the most expensive party we've ever thrown and which "we can totally do all of that within budget" but which we absolutely did not do within budget.

My husband. Skylar whatshisname. That man. That mannn. Yesterday. He was at the grocery store, and he called me and said "what do you need? I'll grab what you need while I'm here, if you'll tell me."

I thought, wrongly, what a thoughtful husband I have and deserve. I shall communicate the most basic of all messages at him and surely there will be no problem and he'll do exactly the right thing.

Well, Stranger, who has been with me since Bill Cosby was still whatever, my husband failed. And you'll agree with me once you hear the rest of it. Both because you are loyal to me and because what he did was objectively wrong.

"Yes. Please get some GOOD ice cream." I told him. "Not that shit you keep buying."

And look. I know this is a family show and I'm sorry that I swore in front of you. But. BUT. Skylar Westerdwhozitwhatsit. has been buying vegan gluten free sugar free happiness free this or that all year because "I'm sorry that I want you to live a long life" or something. And I've tried to stop him, but to no avail. So I've complained to him about this excessively and in detail.

He should know when I tell him that I'm no longer willing to put up with his attack on my most basic joys that I expect absolutely reasonable behavior out of him. ABSOLUTELY. REASONABLE.

I communicated that extremely basic message to this man, who is expected to assign every cell of his gluten free vegan ice cream being to absolute loyalty to me.

"I got you the ice cream you requested," he said, in a, frankly, argumentative tone.

And then he pulled it out.

I'm not lying to you when I say that what he bought.

What my dragon slayer and future mother of my children bought.

Was not normal, good, ice cream. It was not the ice cream of national heroes and interesting people.

It was. Plain. Vanilla.

This. This is what MY HUSBAND. The one who swore before all the angels in heaven at a party where I had to pay a mother f-ing company to rent TABELCLOTHS. A party where my bank account was drained so a dozen children we're related to could eat a meal in the mountains. Where that husband swore to make my life better. This is what he bought to fulfill my order of "good ice cream."

Well, when I threw an absolutely appropriate tantrum over this he rolled his eyes and told me that if I wanted something different I should be more specific.

He acted like I was somehow the unreasonable partner in this partnership of dishonor.

I think we may have rushed into marriage.

Please enjoy some Strangerville as a chaser to the horrors I just fed you.

This time in Strangerville, 2020 has ruined our ability to actually gauge our own productivity, Meg is terrified for her child to become a teenage boy one day, and a woman ends up at the center of a police investigation after stumbling upon a shocking scene in her college apartment. 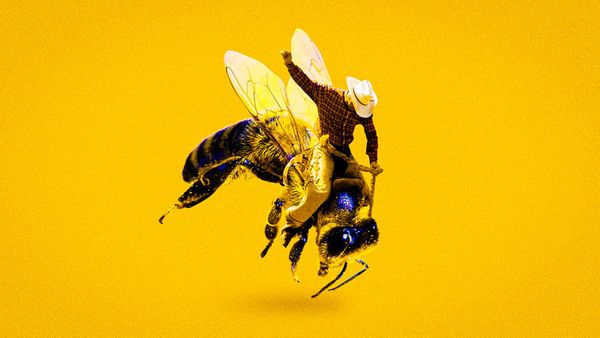 This piece was originally published by The Beehive [thebeehive.com]. My junior year of high school I took AP Language and Composition, a sort of writing and rhetoric course. Unlike

This time in Strangerville, 2020 has ruined our ability to actually gauge our own productivity, Meg is terrified for her child to become a teenage boy one day, and a woman ends up at the center of a police investigation after stumbling upon a