A couple years ago my friend Anna got Duncan a little stuffed animal hedgehog. She called it "Hedgy" and this quickly became Duncan's very favorite toy. My little man was obsessed with Hedgy. He would carry him everywhere he went. One time Sky and I were out of town and Anna was watching him; she sent us a picture of Duncan and Hedgy sitting on the front porch looking off into the distance together.

When that first Hedgy started looking worse for the wear, not at all helped by the fact that some of Duncan's friends got ahold of him and ripped his guts out, Anna got Duncan a replacement Hedgy. We tried to get rid of the first Hedgy carcass, but Duncan flipped out when we attempted to take it away from him. He would go stand in front of the garbage can, somehow aware that that's where we had thrown it, and cry. He loved the new Hedgy, but he loved the old raggedy one, too.

We're pushovers, so we just let him keep the Hedgy carcass.

Eventually Hedgy number two suffered the same fate as his predecessor, so Anna got Duncan another one. And then another. And then another. And then Skylar started ordering these damn things in bulk. And the next thing I knew, we had somewhere around 30 Hedgy carcasses spread out all over the house and yard. And I know this sounds crazy, but Duncan legit knows them all. He loves each of them individually and deeply. He would 100% leave the ninety and nine Hedgy carcasses to retrieve the one if it somehow got lost.

He goes through phases where he wants to play with one of the indistinguishable-to-us Hedgys for a few days at a time. He'll bring one to me and drop it so I can throw it for him. I will literally toss it over to a pile of other Hedgys and he will run to them, sniff around until he finds the one he had originally chosen, and then brings that one back to me to do it all over again.

It's like they're all his children and he's trying to make sure he spends quality time with each one.

We've gotten used to this madness, to the point that we don't really notice all of the Hedgy carcasses anymore. We only tend to realize they are around when someone else points them out to us, as was the case recently with The Perfects who thought our back patio was full of dead rats because they could see a Hedgy wasteland through the fence.

With all of this in mind, you can imagine the trauma we experienced recently when a Hedgy was lost forever.

We had just gotten home from somewhere and the house was cold so Skylar turned on our gas fire in the living room. This thing could be safer, we admit. It's open--no barrier or shield of any kind. It was only a matter of time that something like this happened.

We were in the kitchen so we don't totally know how it all went down (and Duncan can't tell us). I think we had only been out of the room for a minute or two when I walked back in and saw Duncan, silently standing in front of a burning Hedgy that had somehow landed in the fire and then rolled back out onto the tiled hearth.

It honestly looked like he had done it on purpose, but I know that couldn't be. Duncan won't normally go near the fire when it's on and he would never intentionally harm a Hedgy.

Skylar and I used (ruined) a spatula to push Hedgy back into the fire and the three of us watched it burn while Duncan sat next to us softly crying.

It's been 8 days and he still occasionally walks to the fireplace, looks at it longingly, and then sulks away.

I think my dog might need a good therapist.

This time in Strangerville, a crime has been committed and it involves ice cream and marital tension. And a man shares his recipe for smoked oregano and college hijinks. 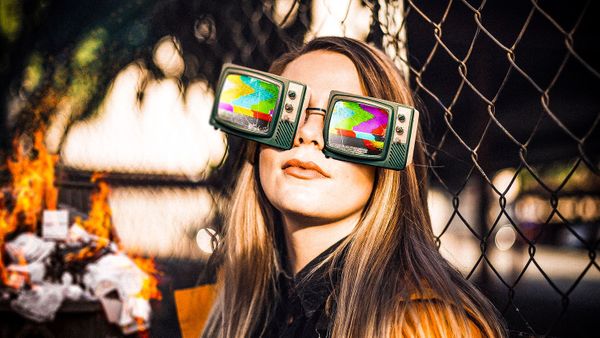 This piece was originally published by The Beehive [thebeehive.com]. Recently I saw a billboard that said, “It’s time to see with 2020 vision.” I laughed a laugh that

This time in Strangerville, a crime has been committed and it involves ice cream and marital tension. And a man shares his recipe for smoked oregano and college hijinks. Story: Rocky Mountain High, by Scott (music by ProleteR [https://freemusicarchive.org/music/ProleteR/Curses_