Christmas came and went. And guys, I have a huge announcement to make.

I know. How could somebody not like Christmas. It's like saying you hate Paul Simon or happiness. Which is different than saying you hate Glee, by the way. Glee is a terrible television program. They named it Glee because they thought we wouldn't be brave enough to say that we hate "Glee." I'm all about lower-case glee. But upper-case "Glee?" Most horrific awful thing to plague the Earth. Besides snakes.

So, back to Christmas.

For the past 10 years or so, I've basically been living the first three-quarters of the movies Home Alone and The Grinch Who Stole Christmas. Also A Christmas Carol. But with fewer ghosts.

Year after year, I told myself repeatedly that I didn't like Christmas. This, Cathie has taken personally every year. (She sincerely believes that she invented Christmas. She even dressed up as Santa Clause this year to cause her grandchildren to question everything they've ever learned about life spread Christmas cheer to the children).

Every year in December I have complained about the crowds, and the tacky decorations, and the snow, and the selfishness, etc. And I was totally like, "next Christmas, I'M LIVING ALONE!" or whatever Kevin says in Home Alone right before he walks in on his gross uncle showering.

Then I moved to Palau, up on top of a big hill overlooking all the Whos down in Whoville. And I grumpily stared down at them as they ate their roast beast and prepared for Christmas on the streets of Palau. And without really realizing what was happening, I suddenly started to miss my family and the lights and a whole bunch of other crap about Christmas until finally one day last week Daniel and I were driving around in the Stormtrooper, listening to Christmas music, and I realized that a change had been wrought from within me.

Daniel. Something weird is happening. I . . . . don't think I hate Christmas anymore.

Who hates Christmas in the first place, you freak!?

That's not the point! I'm trying to tell you I don't hate Christmas anymore!

Give me one good reason to hate Christmas!

Eli, those are all the reasons people like Christmas.

I know! What I'm trying to tell you is that I don't hate Christmas anymore! I like the children and the music now!

Wow. You are such an amazing person.

Good. It's almost the size of a bad person's now.

One thing I've discovered since Christmas has been back "in" is that the holiday is a lot more enjoyable when you don't hate it. Weird, I know. But it's true.

So we spent this Christmas season doing all kinds of Christmasy things. Examples:

1. We made egg-nog 4 times. This will definitely be happening throughout the year. Especially if we don't get salmonella.

2. We threw a Christmas party. We made sure everyone both drank the egg-nog and had a bite of something else that a different person brought so that the salmonella poisoning couldn't definitively be blamed on us.

3. We layed out on the beach every day. Ok, so I know this one isn't Christmasy, per se. But I just wanted to remind you that I live on a tropical island.

Finally Christmas day arrived and I was so excited I could hardly sleep. Daniel and I had a very nonsensical argument about how Santa might enter the apartment even though we don't have a chimney. And I know it seems like he could just come through the front door but we have one of those chain locks that can only be undone from the inside. I suggested we leave it undone that night just in case but Daniel protested this and then walked into his bedroom, mumbling something under his breath about how much time he wastes arguing with me about things that aren't even based in reality. Then I undid the chain lock and went to bed.

Christmas day was magical. Almost literally. In the morning we swam out to a floating dock and played Harry Potter for a while. Our new favorite game. This is where you cast spells at each other that make the other person get thrown backwards off of the dock and into the water. The trick is to make it look as realistic as possible and ohmygosh I just realized that this is why I don't have any other friends!

We could only remember like 2 spells from Harry Potter so we had to make up a bunch of new ones. Then after a while the game just turned into a violent kicking/punching match, which was particularly dangerous on the incredibly slick dock. At one point I was bleeding in four different places.

We finally called it after we looked over and saw a group of Asian tourists floating in the water, staring at us like we were the biggest freaks they had ever seen.

The rest of Christmas happened. We spent the vast majority of the day cooking and baking and dropping cookies off with neighbors and friends before turning in to bed.

Christmas is sort of like anything. It is whatever you make of it. This reality hit me especially hard when I dropped some cookies off with one elderly neighbor last night. Her son was recently murdered by a man with a machete and she talked to me for a while about her grieving. She told me this horrible experience has made her grow and that if bad things can be a catalyst for positive change, then they aren't so bad after all. She told me about how she wants to make a difference in the world and she's trying to find a way to do it here in Palau. And I thought, if this sweet lady can find some good in her son's murder, surely I can find some good in being far away from my family. And in jungle living. And, even, in Christmas.

I think my heart just grew another half size.

Good morning, dear strangers. A while back I decided it was time to stick an FAQs section on Stranger. So I'm finally doing that. You can find the tab above. I know. It's like I'm trying to set a world record on having the 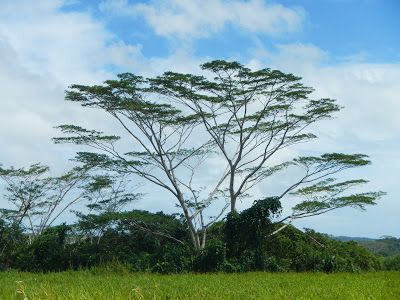 Happy Friday, dear strangers. I hope you survive the ending of the world. Merry Christmas from Palau. [http://4.bp.blogspot.com/-YIozCO6g9jA/UNRluh72m8I/AAAAAAAACag/s-Qn-dGwmxY/s1600/DSCN0490.JPG] Tree