On Friday I asked you to email someone and I gave you pretty much no other information. And you guys have come through like champs. I swear I'm not trying to keep you in suspense by failing to explain the whole story today. It's just that, I have been cooking something up for a while now and I needed you all to be part of the process. It should all be over soon and hopefully I'll have a funny story for you as a result.

Guys, I know. I'm excited for the whole story, too. Like, you remember how excited you got when you were a kid and watched The Price is Right and they announced they were going to play Pinko? I'm at least that excited. But we're all going to have to wait for just a minute.

In the meantime, I have some serious health problems that should be addressed.

I'm not sure whether they're related but two very strange things are occurring on my face:

1. When I plug my nose and blow, air comes out of my right eye socket.

2. Somewhere around 1 pint of water gets trapped inside my sinuses every time I swim.

Here's the thing. I'm not that worried about these conditions because they don't affect anything I care about, i.e., the ability to eat a lot of ice cream and animals.


Wait. That came out wrong. I didn't mean that I eat animals. I meant that I care about them. Which is actually just a joke, because I don't care about animals. And I guess I do eat them. But it sounds really disturbing when you say that I eat "animals." When you say it like that it sounds like I'm eating your pets. And I swear I'm not. Unless any of the meat I have eaten in my life was once your pet. In which case, sorry.

I discovered the air out of my right eye socket thing last summer and learned quickly that I shouldn't demonstrate this for anyone. Because every time I demonstrated it, like 300 people un-friended me on Facebook. And not the people who fill my home page with manipulative pictures of Jesus and misspelled instructions that say, "like if you beleive, ignoare if you worship Satan." But like, the normal fun people who post mildly humorous and unimposing status updates about once a month. So, yeah. Not just losing friends fast. Losing quality friends fast, here.

The problem with the pint of water in my nose problem, however, is that I can't really help but demonstrate it. And that's how last week happened.

The water gets trapped deep up inside my nose and for the most part I can't really tell that it's there. The problem has gotten a lot worse ever since we came up with the Harry Potter ocean game because it requires all players to throw themselves violently into the water face-first a number of times.

It's a fun game. I swear. I'm not giving it up. I don't care what the consequences are.

Anyway, the water stays put in my nose until I lean just the right way. And then, the flood-gates.

Guys, I know once or twice on here I have said things that could possibly constitute a slight exaggeration if you really think about it hard. But I'm telling you right now, I am not kidding with what I'm about to say. Last week, while in a meeting with a judge, I leaned forward to take something from his desk and AT LEAST one tablespoon of water came pouring out of my nose.

I know. Eli, how could you tell that it was one tablespoon? Did you have a tablespoon with you at the time to measure it? Well played, guys.

Admittedly, I had left my tablespoon home that day. But this was my nose. And I know when a tablespoon of fluid quickly gushes from my face. And this was one of those times. If anything I'm being conservative here. It might have been like a whole cup. But I'm going to just say that it was one tablespoon so that when we all get to heaven and find out that it was actually half a cup you'll be shocked again instead of being all like, "Oh. Is that all? We thought it was a full cup. Half a cup sounds lame now."

Somebody make a note of this on your list of things to ask in heaven in case I forget. Because I have a lot of questions about what the heck happened in Lord of the Rings so I might not get to the water-in-the-nose question.

Anyway, when the water fell out of my nose and onto the floor, it made a splashing sound. Seriously. I looked at the judge who was doing that polite thing where you pretend like you didn't notice that something embarrassing happened by quickly starting to ask a question loudly. But then when you get half-way through it, you stop and you're all "now what was I just going to ask you?" because you didn't actually have a real question but were just trying to move beyond something horribly awkward.

Maybe there will be a time in my life when this is incredibly useful. Like, maybe I'll be in a job interview for the circus one day and when they start to turn me away because they aren't impressed that I can walk on the back of my toes (true), I'll turn and say, "but wait. What do you think about this?!" And then I'll lean forward and pour water out of my nose and they'll be stunned and all like, "oh. my. gosh. We've never seen anything like this before." And then they'll be speechless. And when they make a movie about it later, at that part the really inspirational score from the film will start playing. And then there will be a voice over by Denzel Washington, because that's who will play me in the film, talking about how that's how I got my start.

Maybe I shouldn't get this fixed.

For now I just need a diaper for my face.

It's already time to make our Worst Things Ever list for 2013. I have thought very hard about this list and made sure to only include truly the most awful things. There is something so vindicating about posting publicly for the world to see 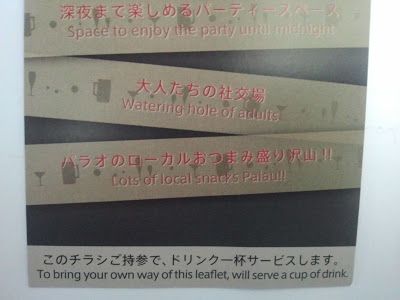 Hey Strangers. Let's enter this weekend in style with some pictures, distractions, and one odd request at the end. This, and the next few pictures, are taken of an advertisement