There's a place we all go for massages and haircuts (sometimes one can experience the massage and haircut simultaneously---which is very strange) near my apartment in Palau. All of the services there are very inexpensive and the people are sweet. On Saturday Daniel called to set up some appointments.

I heard him ask for a massage for me and a "body scrub" for him. I don't like it when Daniel experiences something without me. When I was a kid and Bob and Cathie posed the "if all your friends jumped off a cliff" hypothetical, I remember thinking "obviously I would jump off too. Who wants to be left alone on the cliff?!"

In any event, the Bob and Cathie hypothetical has never proven to be that helpful in my life. Because in reality, I've usually been the friend who jumps off the cliff. But only after tying a rope around my friends' legs so they have to come with. Because who wants to jump off a cliff alone?

So I immediately yelled, "make that TWO body scrubs." And I said it in the voice like I was really confidently upping the ante in Poker. Daniel made the reservations, and then ended the call.

Eli: So what is a body scrub, anyway?

Eli: Well why did you make an appointment for one?

Eli: How do you know that it sounds fun if you don't even know what it is? WHY did you ask for one for yourself!? And how did you even know they did these?

Daniel: They had it on a pamphlet I saw last time I was there when I got my facial.

Eli: When did you get a facial?!

Daniel: The day I got my pedicure.

Daniel: Look, Eli. There are a lot of things I do during the day without you. You're just going to have to accept that.

And I would just like to take this moment to point out that whatever these people charged Daniel and his size 17 feet for a pedicure, it was absolutely not enough.

Twenty minutes later we entered the place for our body scrub, still with no idea about what it would entail. I was directed into a small room to "rinse off" and then was told to go to another room to await further instruction. I did so, wrapped in a towel, because my clothes had been taken from me.

After waiting for a few minutes, a woman came in and asked me for my towel. I stood there for a moment, wondering if this was a trick. But she tapped her foot impatiently so I gave in because I have anxiety over making people wait for things. Which is why I post on Stranger every day.

And that was the beginning of one full hour of being completely naked in front of a bunch of people I live in a very small town with.

I was told to lay down on a table while this woman got out what can be best described as sand paper with pieces of broken glass glued to it. She then started violently scrubbing every square inch of my body while I lay there and screamed.

Daniel was in the next room over. I could hear the scraping of his own sandpaper treatment interspersed with small whimpers until finally, I heard him giggle.

Before long I discovered the reason for the giggle when this woman started scrubbing my armpits. WHAT THE CRAP! WHY!?

The armpits are a place that should never be touched by any person. Touching someone's armpits should be against the law. People should have to put their names on a public registry for breaking this law.

Eventually I was laughing so hard that I stopped breathing.

And as I lay there on the table, squirming, completely naked, while this woman tickled my arm pit with sand paper, I thought, "Eli. How do you find yourself in these situations? And so often."

Then it got really weird. The woman thought the laughing was funny and so decided to intentionally tickle. Things were said. People were hurt. I don't want to talk about it anymore.

Finally she wrapped me in a bunch of sheets to make me feel like I was in a cocoon. I waited in this state for 30 minutes or so before the sheets were taken from me and I was instructed to shower again. I did so, and then discovered that there were no towels available with which I could dry myself.

At this point I just really wanted to leave. Because the process was painful and awkward and uncomfortable. It was like high school all over again. Only I think I might be going through puberty this time.

But I didn't know what they did with my clothes and there were no towels anywhere. So I sat and waited. And waited. And waited. And nobody came for me. So I started calling for help. And still, nobody came for me. I felt like I was on that episode of Mr. Bean where he gets locked out of his hotel room naked and has to find a way to obtain help without getting arrested. And eventually I tip-toed around the back area, looking for any stitch of fabric with which to wrap myself so I could just escape.

That's when I ran into another woman who worked there and who looked at me with surprise.

As it turned out, she didn't work there.

Finally my clothes were located and I was sent out the door where Daniel stood, waiting for me.

Eli: We can never come back here!

Daniel: Wait. Why? I thought it was wonderful!

Eli: Are you serious! What about the fact that you were completely naked for the whole thing!?

Eli: Sure you were!!! What about when they took your towel from you!!!?

Daniel: I was wearing the clothing they gave us when we got here. The shorts and the linen shirt.

[Eli suddenly remembers this clothing, which he set down somewhere and forgot about]

Yesterday I got back from the beach, took a shower, and then threw on the first clothes I could find in a pile of laundry that hadn't been folded yet. Daniel was making a quick trip to the grocery store and I wanted to 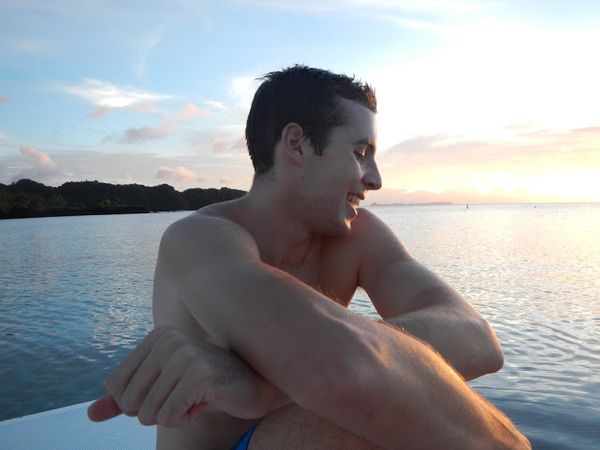 Last night I popped some popcorn. Daniel took a handful of it and then dropped it into his full glass of ginger ale. Eli: What are you doing!?!? Daniel: Huh?