Kurt is an ER nurse. When I try to picture him on the job, I usually see some mixture of General Hospital, Scrubs, and The Brady Bunch (because he gives off a strong Peter Brady vibe).

Because he's a nurse, he has nurse's schedule syndrome, meaning that he works 793 hour shifts and then has every day off until Christmas Eve 2045.

This is something I'll never understand about the work schedules of ER nurses. Does it seem to anyone else like nurses always seem to work erratically inconsistent and inconvenient schedules, insanely long shifts, and on every single holiday possible?

Kurt is hardly an exception to this. Sometimes he works a million hours in a row. Sometimes he has a million hours off in a row. The only consistent thing about his schedule is that he always comes home, makes some vague comment about how close he came to human poop in the last twelve hours, and then pops a handful of crackers or other finger foods into his mouth like he spent the day not coming close to human poop.


Today was one of those days Kurt had off for no good reason at all. When he doesn't work, I have absolutely no idea what he spends the day doing. NOT my laundry, in case you were wondering. I confronted him about this today when I slipped home for a quick lunch.

Eli: I can see that my laundry is still piled high.

Kurt: About that. Did your former roommates really, truly, do your laundry, or is that just an Eli-ism?

Eli: Have I ever exaggerated before?

Kurt: I really hope you have. Otherwise you pee your pants A LOT throughout the day whenever someone emails you.

I explained to Kurt that the laundry thing is actually NOT one of those "Eli-isms," and, in fact, my past roommates have done my laundry. This usually starts by me pretending to trip and "accidentally" drop my laundry into their basket, which they're carrying to the washing machine. Then I innocently say something like, "well, I guess since it's already mixed all together, you might as well just do it."

Then they do it from then on, because I tend to live with pushovers. On one occasion I had a current roommate call a former roommate to verify that he wasn't the first roommate to be conned into doing my laundry.

Current: Hey, I was just wondering something about whether Eli does his own laundry--

Former: No--that's your responsibility. You knew that before moving in, right? Also, you'll get used to the meowing. Just imagine that he's working on a part for a movie and it's less disconcerting.

After talking with Kurt, I wandered back to the office this afternoon, wondering how long it's going to take for him to suck it up and take on his new responsibility. I'm getting worried because it's been a few weeks and I'm totally out of clean clothes and have had to start wearing his when he isn't looking.

This evening I returned home to find Kurt and his friend Karalee. She was making him try on clothes and model for her throughout the apartment so she could take pictures. Kurt had made dinner and had it out waiting for me. He had also cleaned the apartment prior to engaging in the photography shenanigans with his friend, Ethel Mertz.

My life today felt exactly like an episode of I Love Lucy. Except way less comedic domestic abuse. Also, I don't know Spanish. 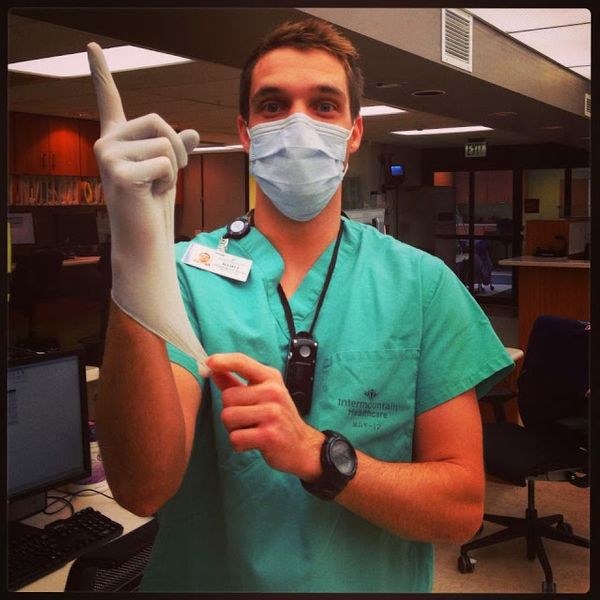 This is sort of a state of the union post. Because I’ve now been in the United States of God Bless America for over two weeks and some of

Kurt: Will you look at this thing behind my ear? Eli: What do you think I am? Your doctor? Kurt: Just look. It's freaking me out and I don't know what it is. Eli: Ugh. Fine. But I don't do full physicals without advanced