So the other day I wrote that post about how SweatBlock has completely changed my life since parents have stopped pulling their children away from me in public. Then SweatBlock saw the post and reached out, creating a promo code for Strangers who order it. Then at least one of you (HI LEE!!!!) accused me of selling out. WHICH I WOULD HAVE GLADLY DONE HAD SOMEONE TOLD ME HOW BEFOREHAND. But you guys. I didn't have the foresight to sell out. I WISH I HAD SOLD OUT. I had never communicated with SweatBlock before writing that post.

But I thought you would be interested to know that SweatBlock emailed me today to say that already the response from that post in terms of sales has been almost as good as the response they received when they appeared on Dr. Oz. Which can lead one only to conclude that you Strangers are sweaty beasts.

And now, your Pictures and Distractions. And yes. I am in every picture. I just like myself that much.

Google knows what you've been up to. Thanks, Melissa.

A pretty cheesy but also tear-jerker video about bullying from the Mormons. Thanks, Gavin.

Homeless people wrote facts about themselves. Thanks, Nick.

Over-thinking The Little Mermaid. Thanks, Nicole.

Kids can't be trusted to do anything right. Thanks, Laura.

Magical Russian fantasy photography. Number two is the stuff of nightmares. Thanks, Bridge.

Best ending for a motorcycle crash. Thanks, Matt.

The Onion makes fun of my city. Thanks, John.

If you would like to have something included in Pictures and Distractions, please email me at itjustgetsstranger@gmail.com. 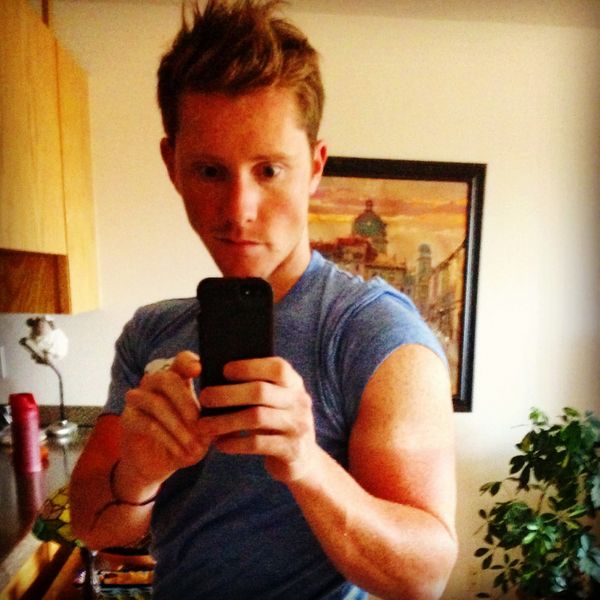 You guys. The Ironman is now four weeks away! FOUR! That can be counted on one hand! Unless you're my eighth grade shop teacher who only had three fingers on

The other day I saw what Annie looks like when she thinks she's about to die. Annie is my close friend at work who I caught wearing a Ring Pop last week [https://www.itjustgetsstranger.com/2014/08/what-not-to-wear.html]. I asked her if