It's not a secret that in my family I am not trusted with bringing even remotely complicated food assignments to family functions. It's also no secret that I'm very sensitive about this.

Usually, Cathie will send out some email about a big family gathering. She'll inappropriately use an excessive number of emoticons. The font and color of text will change mid-sentence multiple times. She'll tell us how much she loves us all. And then she'll include some assignments for my sisters and me to bring things. It often looks like this:

Krishelle: Creme brulee and the heart of a unicorn baked inside of a hand-crafted pygmy sculpture.

Krisanda: Home-aged cheese and nine-layer wedding cake in the shape of a dove.

I hate this. I find it offensive and impractical. Two of my sisters have like 1,000 children and besides that WAY more going on in their lives than I do. Unlike them, I have the luxury of cooking in my own home without also having to comply with all the laws about not neglecting my children.

I mean, I have Rebecca. But if I give her a ball of yarn tied into thousands of knots and ask her to work it out, that usually keeps her occupied for a while.

I don't really understand why I get assigned "chips" or "drinks" or "just yourself!" as has happened on a number of occasions. I'm relatively competent. I can cook. Maybe not as well as my sisters, but I'm not that far behind them.

So when the cursed assignment-email goes out, I usually protest. I demand that I be treated like an adult. I explain that if Krishelle has been assigned to bring ice from the Himalayas, I can bring a damn quiche. Or something.

I don't actually know how to make a quiche. Bad example.

Then my family reluctantly agrees. And we go into this absurd negotiation. I'll offer to bring the wedding cake. They'll counter with "how about Kool-Aid? And you can mix it when you get here!" I'll counter again with potato salad. They'll respond with, "then you could freeze the Kool-Aid in an ice-cube tray with little toothpicks so we can have popsicles! And we'll help."  Eventually we settle on something that takes minimal effort but at least requires the use of an oven or microwave. Like corn.

Well last Thanksgiving I had had enough. I told the family that I was bringing a number of items (all of which were replicated by my untrusting mother). This, unfortunately, included a cherry pie, which I made from scratch.

The pie was an absolute disaster. It looked like a preschool art project. It tasted like Robitussin. Except, no high. NOT THAT I KNOW WHAT THAT IS, CATHIE.

My family was condescending. Mostly because we're all a little competitive about our cooking abilities. In case that didn't come across in the first several paragraphs of this post.

They told me they were sure I tried my best and that they were just proud of me for attempting.

So this year, I attempted it again. I made a pumpkin pie from scratch. I found the most popular recipe available on the Internets. I followed it as carefully as possible. And when the time came, I nervously took it to Bob and Cathie's house.

It was placed next to Bob and Cathie's award-winning apple pie and Krishelle's magazine-worthy coconut cream. It was viewed skeptically.

Then, after a long and wonderful Thanksgiving meal, it was apprehensively tasted.

Small bites were taken. The room was silent. Then Cathie looked at me. A small smile forming on her face. I was prepared to finally be invited into the circle of responsible family adults. My days of being assigned to bring "candy" were done.

Cathie put her fork down, patted me on the shoulder, and sweetly said, "son. Some people will just never be good at making pies. AND THAT'S OK."

Tonight I came home from work to find a shopping cart in my apartment. Not the most ridiculous thing I've come home to. Not by a long shot. But still, I didn't really have time to deal with complication today. Eli: No. Rebecca: What? 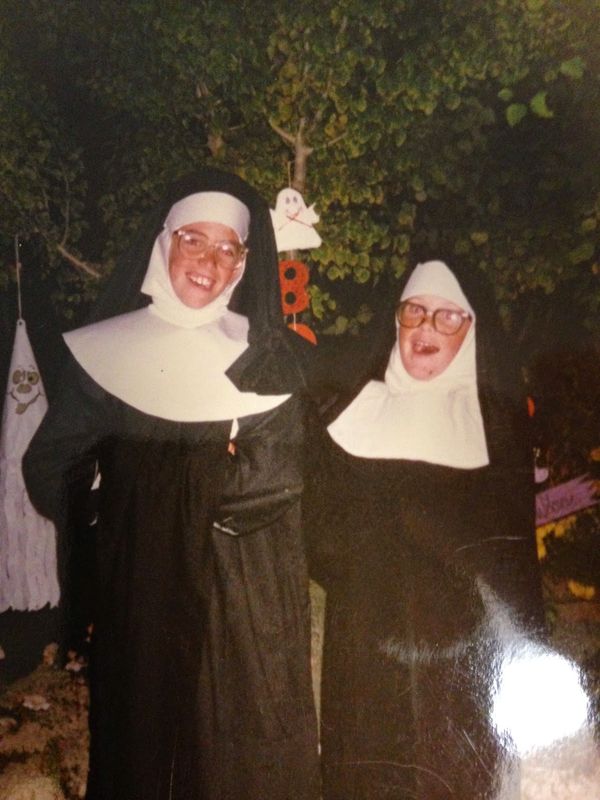 I should be 100% way too embarrassed to share this photo with you. But I just can't help it. It is too horrifically glorious to keep it all to myself.