I met Hannah Rose three years ago. We both ran in the same 5k and took first and second place. (This was not a very competitive race, but we usually neglect sharing that fact when telling the story to others.)

I was impressed with how fast of a runner Hannah was. I was in good shape at the time, at the end of my training for the first Ironman I attempted, and have been a runner for many years. And yet, I had a difficult time staying ahead of Hannah in the race and only beat her by a small margin.

She did not seem pleased that she did not win. I later found out that she was an incredibly competitive person. A collegiate runner for BYU and a phenomenally good athlete, she entered the not-so-competitive race expecting to come in minutes before anyone else.

I RUINED THE DAY.


But we struck up a conversation after the race concluded. Hannah Rose was obviously a gem and we immediately hit it off. She made the connection that I was the guy from Stranger, which she had started reading a few months before our meeting. We also realized that we lived near one another in downtown Salt Lake City.

Hannah Rose and I began a very close friendship and before long we felt like siblings.

When I moved to Palau, Hannah started sending me packages of goodies I missed from the U.S. She introduced me and my gut to something called "Cookie Butter," which I quickly learned to eat by the spoonful every time she restocked my supply with a new box of goodies from overseas. My 30-gained-pounds while in Palau thank her immensely. But in any event, she helped me feel connected with home at a time when I really needed to feel connected with home, and I will forever be grateful to her for that.

When I returned from the Land of Coconuts, Hannah Rose and I reunited. We bonded over our shared love of cooking, attempting to be hipsters who like foreign films, and learning how to be artists. And then the summer approached and we got season passes to Lagoon, the local theme park, which we attended religiously, assaulting you with photographic selfie proof on a weekly basis.

I love that Hannah Rose dearly. And I was thrilled and amused when she asked me several months ago to be the "Man of Honor" at her January wedding.

Hannah Rose was married on Saturday. Her wedding was beautiful. And I took my duties seriously. I'm still not exactly sure what those duties were, but I was quite serious about them.

I share this all with you because you Strangers who read Stranger regularly probably feel like you know Hannah Rose. And you deserve to know about this big event. In fact, you deserve to have been invited to her wedding. We apologize that you didn't get an announcement. We tried to send you one, but it was returned because we didn't put an address on the envelope.

Congrats, Ms. Hannah Rose. You were the most beautiful bride in Salt Lake City that day. I checked. NOT THAT IT'S A COMPETITION. But, it totally is a competition. And you won.

One of the most difficult things about being a first-time homeowner is suddenly taking on a thousand new responsibilities that I've never had to deal with before or, in some cases, had even contemplated. A lot of these are simple, but not being in 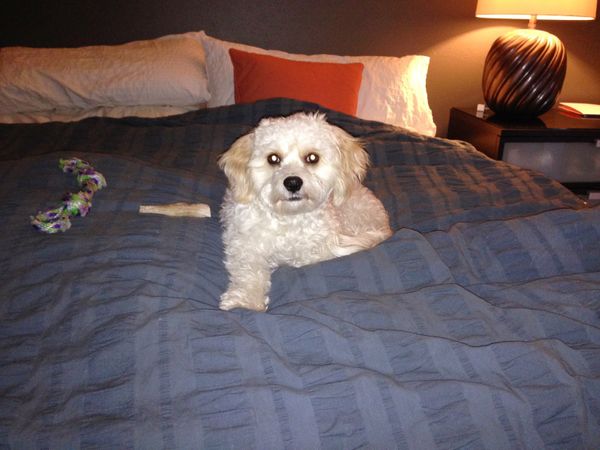 The other day Matt asked me if I had any time this week to take Ollie back to the spay and neuter clinic to get him checked out. His unmentionable