Matt went out of town this weekend so before he even walked out the door, I was cradling Ollie in my arms like a baby, walking to my car, and promising the puppy we were going to have a long and full life together.

I got to keep Ollie for four whole days. Four glorious ecstasy-filled days. NOT THAT I KNOW WHAT ECSTASY IS, CATHIE.

I decided to take him to the dog park eleventy million times mostly because Ollie seems to have nearly boundless energy these days and I hoped and believed that if he ran around with other animals for an hour or so it might wear him out enough to not think 6:00 AM is the perfect time to play "drop a sock on Eli's head and bark until he throws it and then repeat." On a side note, I've tried to get him to come up with a more concise name for this game but he never does what I ask.

I don't know how to own a dog. I don't know what the rules are. I don't know social ques. Cues? Queues? Queueueueues? I don't even know which version of that word is appropriate in this context. THAT'S HOW LITTLE I KNOW.

I was intimidated going to the dog park because I didn't really know what I was supposed to do there. Am I supposed to intervene if the dogs start fighting or does that make me a helicopter parent? Are there poop-free zones or is the entire place a free-for-all? What if a dog starts humping Ollie (NOT THAT WE KNOW WHAT THAT IS) or what if Ollie starts humping another dog (NOT THAT WE KNOW WHAT THAT IS)? Am I supposed to stop it or is it ok for me to walk away and pretend that's not my dog until someone else intervenes? Is the dog park like daycare? Can I just leave him there for the day and come pick him up at 6:00? Is lice and pink eye a given?

No one ever taught me these things during the period of my life when I was probably supposed to have learned these things. Bob and Cathie were too busy faking their own gory deaths just to see how I would react and so didn't have time to teach me these important life skills. AND I WAS SEVEN.

So, despite being totally socially inept, confused, and out of my element, I went anyway. I had practice dealing with this type of scenario because I went to high school every day for three years.

I walked through the gate and set Ollie down, and you guys. You know that scene from every teen movie where the awkward outcast girl gets a makeover and goes to prom and when she walks in everyone turns and looks at her and they're all like "I can't believe we were mean to her when she's actually so pretty"?

That. I swear to you the entire dog park. All of the people. All of the dogs. All of the mounds of dog poop. Everything stopped what it was doing and turned and looked at us.

I know I'm biased and I know that I am totally unreasonable when it comes to this topic, but I am telling you right now that it was affirmed to me that day at the dog park that Ollie is the cutest animal anyone has ever seen. Because every single person in that dog park started following him around, ignoring all of the other 50 dogs, asking me a thousand questions about him and laughing at everything he did. Two different people joked with me about trading dogs. Even the other dogs seemed to notice that no cuter creature has ever existed. They swarmed around him. They begged him to sit at their lunch table. They asked him to Homecoming. They laughed at all his jokes. Even the ones that weren't meant to be jokes.

And I know this experience wasn't about me. But I felt like the most popular person who has ever existed. And it went straight to my head and I don't even care.

Ollie, being the most friendly, sweet, playful dog who has ever lived, ran directly into the center of the park and began chasing other dogs, sniffing their butts, licking their faces, all of the normal things we do at parties. The experience was going smoothly. That was, until dog from Hell showed up.

I knew he was trouble when I saw him enter the park. He was about twice the size of Ollie and he had hate in his eyes. And the moment he came through the gate, he spotted Mr. Ollie Pants and bolted at him. The other dogs cleared out quickly and Ollie, without seeing it coming, was knocked clean off his four paws. The dog circled him, nipping at his legs and trying to bite Ollie's face.

What then happened can only be described as a "mom lifting the car off of her baby" moment. In a series of moves of which feats of athleticism I never before knew I was capable, I traveled through the air, over dozens of moving dogs and other obstacles, the twenty feet or so, and swooped a terrified, confused, and yelping Ollie into my arms. The dog began jumping on me, trying to bite Ollie's legs as my little puppy clung to me for dear life. I fought the dog off with my one free arm and Ollie climbed up onto my shoulder, trying to get as high off the ground as he possibly could.

The owner of the other dog approached. I expected him to apologize and take his dog away. But to my surprise he said, "if you let your dog just fight my dog back it will teach my dog a lesson."

I looked at this man like he was the dumbest person I had ever seen. And I tried not to sound too judgy when I said it: "I'm not really looking to teach my dog that this is appropriate behavior."

And as I heard the words come out of my mouth, I suddenly had an out-of-body experience. I realized that I was a foreign creature I no longer recognized. If you had told me six months ago that in 2015 I would be standing in a dog park, covered in animal feces, holding a puppy on my shoulders, and arguing with a stranger about appropriate pet parenting techniques, I would have accused you of being a writer for Glee.

The nonsense. The absurdity. Never mind that this isn't even my dog!

WHEN DID I BECOME THE KIND OF PERSON WHO TREATS PETS LIKE THEY ARE PEOPLE!?

I guess I was relieved that I realized what had happened so I could put an end to this ridiculous behavior that seems to have become the norm for me.

So I stopped myself from arguing any further, took Ollie home, bathed him, put him in is PJs, read him a bedtime story, and tucked him in.

On Sunday night I watched all eleventy million hours of SNL's 40th anniversary celebration. I'm not an SNL fanatic. I probably catch about 5% of each season. I find most of the sketches two times longer than they should be and half as funny 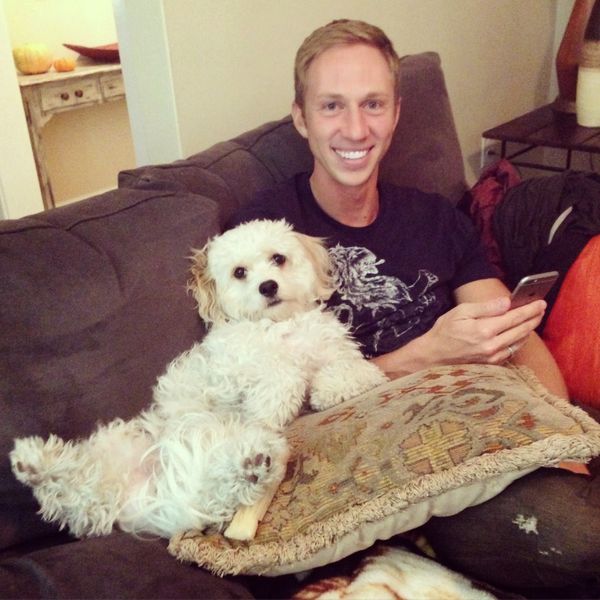 You guys. Valentine's Day. It's not that I don't love that I'm Cathie's "NUMBER ONE VALENTINE XOXOXOXOXOXOXO" again. But this holiday just gets more and more annoying for me every