It was Labor Day on Monday so Matt, Ollie, and I decided we should labor.

We made a stop at Home Depot, where all 7 billion of Earth's inhabitants were wandering the aisles at exactly the same time. This did not discourage us, but it did make our "quick trip" take about four times longer than we planned. And Mr. Pants was not pleased about this. But he got to ride in the cart EVEN THOUGH I ASKED FIRST. Apparently I was "too big" and "no, I'm not pushing you around again. It's embarrassing."

At any given moment Matt has over 3 million projects going on and almost all of these projects involve skill and trickery I thought went the way of the Earth when my very handy Great Grandpa Hinckle died in the mid-90s. So I like to hang around and watch when he engages in such sorcery.
Monday's project involved creating something called "chalk paint" (mixing half a cup of warm water with half a cup of plaster and 1 1/2 cups of paint), painting a number of chairs, and then "distressing" them so they would look like they were made 1,000 years ago. I don't understand why we spend time updating furniture only to make it look as old as possible, but Matt's an "artist" so I just accept absolutely everything he says about anything.
I have a roll-top desk in my house that is kind of scratched up and matches absolutely no other piece of furniture I own. I inherited this thing a few years ago when Cathie told me they were "getting rid of it" and I chained myself to the side of it and peed into a bucket for five days until Bob and Cathie agreed to hold onto it for me until I lived somewhere that had enough room for me to take it in.
Their patience lasted only about 24 hours so by the good graces of my younger sister, Micalyne, it found a new home in her new condo until I could "get over here and get this piece of crap out of my house."
You guys. I didn't particularly love the look of the desk. I think roll-top desks are impractical. And I hated the color of the wood. But Bob gave Cathie this desk as a Christmas present on their very first Christmas together in 1976 and it was a permanent fixture in our home all throughout my formative years. I played games with this thing. Hid toys in it. I watched Cathie sit at it and write in her journal when she was nearly the same age I am now. And when I look at it now, I'm filled with happy memories of a simpler time.
I couldn't let this leave my family.
But. To be honest. It has been an eye-sore in my house for the last nine months.
So we went to work. Matt painted his gorgeous but damaged antique chairs.

And after six straight hours of painting, distressing, and waxing, I turned this:

And I freaking love how it turned out.
I like to think that one day I'll hand it off to my own kids and they'll take it and morph it into something new. And their memories of their dad sitting at this desk, writing, or doing whatever it is their dad will do, will be like the fond ones I have of my own mother whose character will always be embedded in the fibers of this beautiful piece of furniture.
It was a happy afternoon of work with a meaningful outcome.
Meanwhile, Mr. Ollie Pants, who had received a bath that very morning, was in my backyard turning himself into this:

When we walked to the gate and found him, we were laughing too hard to be upset.
~It Just Gets Stranger 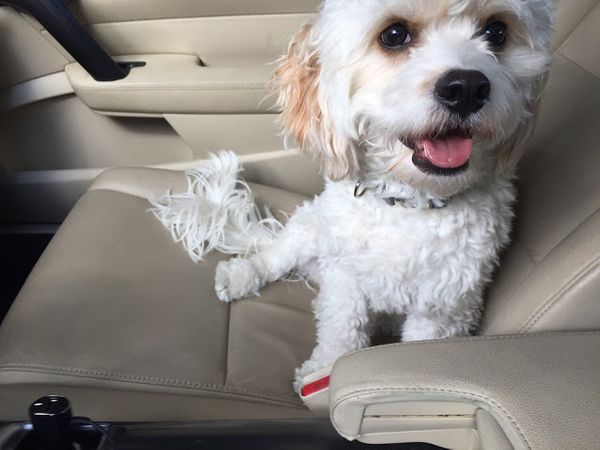 Rebecca is in town. I know this because she stormed into my house today, rearranged everything in it, told me every possible fact about her life, and then left in

I have been relatively clear here that I am basically incompetent when it comes to technology or what the kids are calling "The Internets." And this is pathetic because I have maintained this blog for nearly 8 years now (OH MY GOSH YOU PEOPLE