I love Halloween like a fat kid loves cake. And when I was a child I was actually pretty creative when it came to Halloween costumes. I got this gene from Cathie, who I swear to you made Crayola Crayon Halloween costumes for me and each of my three sisters in 1989 and had us march up and down the street together like a box of crayons.

I was blue. My sisters were purple, pink, and orange. Cathie had the foresight not to make a "white" crayon costume and then have all of the neighbors wonder why one of the McCann kids was allowed to dress as a Klansman for Halloween.

Cathie deserves extra credit for this because some of you kids don't remember 1989, but there was no Pinterest back then. Basically if you wanted to be creative, you had to rely on your own ingenuity. Which, again, is why Cathie and D'On Allen deserve all of the world's praise for bringing my and Sam's 1995 Halloween vision to life when

I know this is the eleventieth time I have shared this picture on Stranger, but this thing deserves the attention.

Also, when I texted Cathie to ask whether she could find the crayon picture above, she responded with a barrage of my childhood photos that have now destroyed my self-esteem.

Something happened when I became an adult. I didn't stop wanting to come up with creative Halloween costumes. I just got super lazy and gave up trying. As a result, for the last 15 years, I have rotated my two costumes each Halloween: a flower child from the 60s (courtesy of Cathie's sewing skills when I was 17), and a 1970s Navy man (courtesy of Bob's dedicated service back when he was oh my gosh so skinny I'm suffocating).

Last year my friends tried to recruit me for a group costume, but since there are a lot of things I'm just not willing to do anymore, they could never get me to commit to anything. This was much to the chagrin of Matt and John Michael who are still angry with me for not joining them and Wade in going as the cast of Golden Girls.

John Michael screamed at me on a number of occasions, "we'll even let you be Blanche!" which apparently is the most coveted Golden Girls position. I don't know. I've never actually watched the show.

On a side note, Matt didn't get the memo that the Golden Girls idea had fallen apart and so he showed up unwittingly looking exactly like Ruth Bader Ginsburg.

This year Skylar is trying to convince everyone to do a group costume, naively throwing out optimistic suggestions, only to be repeatedly shot down. To be fair to the rest of us, his suggestions have been terrible thus far. His most recent suggestion was to go as the cast of some children's animated program from the 90s called "Arthur," which Skylar now believes I am unAmerican for having never seen.
Skylar has no Halloween credibility with me anyway, considering that last October I was trying to find something to do one weekend and I started throwing out some ideas when,
Eli: Do you like haunted houses?
Skylar: What do you mean?
Eli: You know. Haunted houses. Where you go to some warehouse that they set up for you to walk through and it's supposed to be scary.
Skylar: Oh. Yeah. I guess. But I mean, like, I don't believe in them.
Eli: What do you mean by "I don't believe in them?"
Skylar: I mean, like, I don't believe that they're actually haunted.
You guys. He said it like I was maybe trying to trick him about Santa Claus and he wanted to make sure I knew that he was "in the know."
In the know about how the whole commercialized ticketed warehouse October haunted houses are not actually haunted and that they're all fake.
Needless to say, I have ridiculed him at least twice a week for the last 12 months, and I now invite you to do so as well.
Also, he should probably just go as Robert Downey Jr.'s love child since that would require no costume.

I told you all of this because I want you to tell me what you're going to be for Halloween, what your most creative Halloween costume ever was, or what's the best costume you've ever seen. So in the comments below, share away.
As a bonus, upload a childhood photo on Imzy, if you have one.
And I'll repeat my yearly plea for someone to please find a way to be The First Eye. I'm still waiting, people.
Also, please enjoy this week's Strangerville Short while you do. 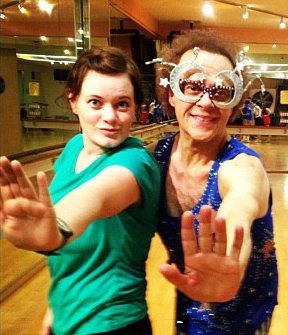 This week on Strangerville Shorts, Eli tells a story live at The Porch about a time he wandered a foreign airport naked, searching for his clothes. http://traffic.libsyn.com/strangerville/Short_Korean_Bathhouse.mp3