When I bought my house two years ago one of the first things I noticed about it was that the seller was, shall we say, a bit generous with a few of the listing details. For example, the listing said there were four bedrooms.

To be fair, I've lived in the place for 26 months now and I'm still not really sure how many bedrooms there are. There's the space where I put my bed. It's an add-on to the house from 1952 and it has 7-foot sloping ceilings and a light switch that is so inconveniently placed that you actually have to do yoga just to reach it.

Then there's this other room that you have to walk through to get to that first one. I still have no idea what to do with this room. It's currently strewn with dog toys and furniture that couldn't fit anywhere else.

Then there's another 1952 add-on room that has no closet and is somehow colder than it is outside during the winter because they decided that insulation wasn't really all that important when they built it.

And finally, there's a room in the basement that some of my friends have critically referred to as "the sex dungeon" because there are exposed pipes, one exposed light bulb in the center of the room, and for a while, just a mattress on the floor. The mattress situation happened because the stairway to get to the basement was dug out by prisoners trying to escape Azkaban, so you can't get anything larger than Trixy Meowman down there.


So, yeah. My house has somewhere between 0 and 4 bedrooms. But the seller gave itself the benefit of the doubt and just said 4.

But the most generous description the seller used? The listing said the house had two bathrooms. Which is totally true. If you can count a toilet sitting just below a dirt-crawl space and on a concrete floor in a very dark room "a bathroom."

I'm not mad about this because it's not like they lied to me about things I couldn't verify with my own eyes (fingers still crossed). I walked through the house and saw exactly what it was and decided that I wanted it, no matter how hyperbolic its online description. And I haven't regretted the decision for a minute.

I've known ever since I moved in that eventually I would want to finish (read: completely build from scratch) the basement bathroom. I've become more motivated to do this recently since I started listing the basement on Airbnb.

So I finally decided to bite the bullet and call Tim the Contractor.

I found Tim the Contractor on the internet right after I bought the house. I hired him to have an island put into my kitchen. Then Matt used him to finish a bathroom in his condo so he could sell the place. Matt is using Tim the Contractor for a project at Broome Bungalow now.

We love Tim the Contractor because he gives us reasonable bids and he stays within budget and does a good job.

Tim the Contractor is 1,000 years old and communicating with us is nowhere near his top priority. He doesn't really respond to texts or calls or emails. And whenever I corner him and ask him for a timeline or even just the roughest of rough estimates on how long this whole thing might take, he has this remarkable ability to pivot so smoothly that it takes me about 24 full hours before I realize that he never even attempted to answer the question.

This was frustrating when I hired him the first time, and partway through the project I sort of thought I would never use him again. But then he finished everything, it looked awesome, and it cost less than he had predicted. So I referred him to Matt.

Matt had the exact same experience with Tim. He was frustrated partway through the project, but after it was all said and done, he was happy with him.

So now we use Tim the Contractor and we just accept up front that he's going to make the project a total mystery to us and we just have to be ok with that.

So I called Tim the Contractor and had him come take a look at the basement. Tim the Contractor walked around it, told me that the project would not be nearly as difficult as I assumed it might be, and then a few days later he sent me a bid that was literally half the amount I was expecting.

So I hired him right away and didn't even attempt to ask him any more questions.

I didn't really care this time how long the project would take. The bathroom is in the basement. It's out of the way. I don't desperately need it. More than anything I'm just looking at it as a good investment.

But then I got a puppy.

Remember when people used to say that if I loved Mr. Ollie Pants so much why don't I just get my own dog and I would be like "why would I get my own dog when I can just play with this one and then make Matt take care of him?"

But then Mr. Duncan Doodle cast a spell on me.

So now I spend my entire day holding onto a puppy with one hand, tripping over dog toys, and congratulating another living being on pooping outside.

Tim the Contractor came and did a surprising amount of demolition in my basement. The demolition is now spread throughout the house and down the driveway. There is currently a giant hole in the floor where he had to break up concrete to prepare for plumbing.

And upstairs: there are dog toys everywhere, overturned stools and chairs to block pathways to non-puppy-proofed rooms, and clothes hanging on every surface since the dryer has been disconnected by Tim the Contractor, who, seesupra everything above, will not give me a reconnection date.

Since I never know when Tim the Contractor will be coming, and since I can't leave Mr. Doodle home alone with Tim the Contractor because Mr. Doodle is scared of everything--I swear to you he sits down on walks every time a car drives by and he refuses to start walking again until he can no longer hear it--I basically have to be home ALL the time now.

So yeah. There's not really an ending to this story. I just wanted to let you know that my life feels like chaos right now but when it's over there will be TWO showers and a potty-trained puppy at my house.

And now, this week's Strangerville Short: 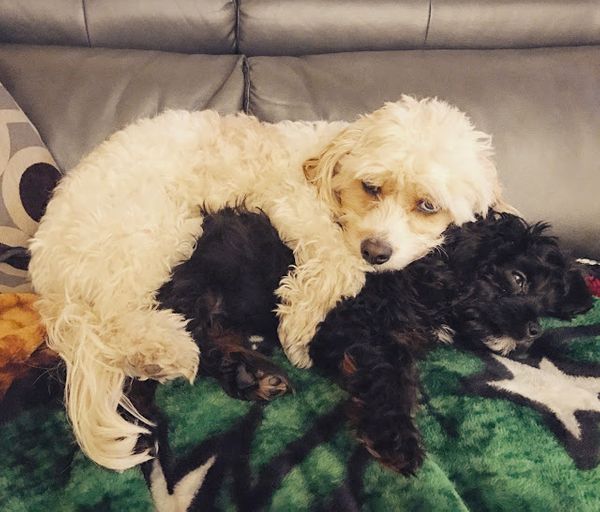 Considering that I already communicate with Herminda at about 7% mutual comprehension (generous), it was probably not the best idea to up and complicate my life through what is turning

This week on Strangerville Shorts, Jolyn and Eli pitch some ideas for their upcoming debut on Shark Tank. http://traffic.libsyn.com/strangerville/Short_Business_Ideas.mp3