On Saturday I saw Hamilton in the Big Apple. My friend Natalie had invited me to go with her after she scored some tickets by swearing her soul to the devil. Hashtag worth it. Hashtag, not that we know what the devil is.

I arrived in New York City two days in advance of the production because I'm a generally paranoid person and I'm 1,000 percent convinced that impossibly-amazing things like me going to see Hamilton on Broadway are not going to work out.

For this reason, I was positive that a catastrophic event would occur before the Paul Simon concert last year as I waited a few months for the big day to arrive. I routinely checked all of the ticket information twice a day, every day, for eight straight weeks. I even practiced a conversation in my head over 100 times wherein a ticket taker would tell me my tickets weren't valid and I had to explain how important Paul Simon was to me so he would still let me in.

I'm not a fun person to be with.

Natalie invited me to go to Hamilton with her a few months ago. She was visiting Salt Lake City and she casually asked me if I had ever listened to the soundtrack. This prompted me to perform the entire musical, every single part, even the female roles, for the next three hours. By the time I concluded the closing number, there were tears. I mean, they were mine, but tears nonetheless.

A flabbergasted and probably annoyed Natalie then informed me that she had two tickets, that she was looking for someone to take, and that she just realized that it would probably actually be unconstitutional to not take me after that performance.

There were even more tears. And an encore performance that was more like fan fiction loosely based on the original. It incorporated at least one verse of "Don't Cry For Me Argentina."

I did not even know I was auditioning for the role of "Natalie's date to Hamilton," which Natalie later told me made my performance more authentic.

And so, on Saturday evening, we met at a restaurant near the theater and began one of the top five best nights of my life.

We saw two long lines forming in front of the theater about two hours before the show was supposed to start. One of the lines was for people hoping to get tickets and the other line was for people, like us, who already had tickets. I suggested to Natalie that we should probably go wait in the line. Natalie explained the concept of tickets to me repeatedly, assuring me that waiting in the line would benefit us in no way.

Eli: But what if those people all know something we don't know and they won't let us in because we didn't get in the line early enough?

Natalie: Eli. We have assigned seats. The show starts in two hours. There is no reason for us to go wait in that line.

Eli: Then why are all of those people waiting?!

Natalie: Because people are idiots. Someone left an online review for The Wolf of Wall Street complaining that there were no wolves in the movie and hundreds of people liked this review.

I later looked this up and found it, among other gems. As far as I could tell, hundreds of people did not find this review helpful, but the point was well taken.

And so, fifteen minutes before the show started, we walked in and took our assigned seats with absolutely no complications.

This means that people really are idiots. And I would be one of them if the rational people in my life didn't guide me away from all of my choices.

I had never been to a show on Broadway before. I really didn't know what to expect. I was surprised to find that the theater is really just a small playhouse. Nothing particularly fancy. It was sort of run down, even. And I actually loved this. The whole thing felt so cozy and familiar.

And then the show started.

I legit think my spirit may have left my body for a few hours.

It was a religious experience.

People outside the theater said they saw angels floating above it.

When they got to the last number and Eliza Hamilton came out and sang about how she put herself back in the narrative and worked for the next fifty years to make sure her husband's story got told and how she started the orphanage and etc. etc. etc., I actually thought I was going to die from happiness.

Also, there was a woman sitting right behind us the entire time sobbing like she just lost her favorite pet. This was incredibly obnoxious. She even got shushed at one point. I wish she had bravely bottled up all of her emotion like the rest of us.

I feel like the luckiest person alive that I got to go to this thing. Like most people who listen to the music, I'm also extra amped up about America right now. If it every wants more money from me, now is probably the best time for it to ask.

I pulled up to my house on Thursday and there was a cop car and a CSI van out front. I had the following instinctual reactions in the following order: 1. Keep driving; never look back. 2. Pull in, act surprised at whatever they 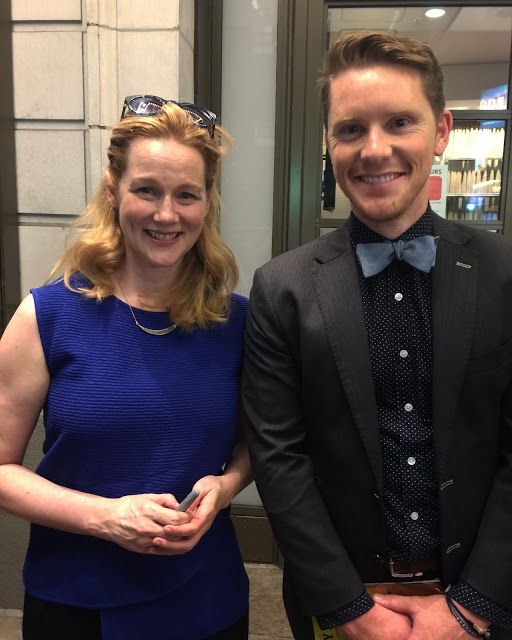