Check out our latest Strangerville episode above (or at the bottom of this post)!

I've been working a million hours the last couple of months and it has been stressful. I can tell when I'm reaching a breaking point because the day-to-day work I do starts to affect me emotionally. Two Sundays ago I was dealing with a bunch of really depressing child abuse situations all day. I was tired. And then I got a pretty run-of-the-mill phone call that sent me over the edge and suddenly I was eating ice cream out of a container with a fork, choking back tears, and searching the internet for poodle mixes.

So I decided I needed a break.

The problem is, this is a really hard time of year for me to take a vacation because for some reason everyone laws all of their laws from January through March, so working a million hours is sort of the norm for me during these months.


But then I found out that Skylar had a friend coming to town and he was going to take her to Arches National Park for two days, and so, without really being invited at any point, I loaded my things into his car last Thursday evening, turned off my phone, and started knitting for the next three hours, until we arrived in Moab Utah and checked into our Airbnb.

I visited it for the first time in 2011. Looking back, I don't know how I went 27 years of life, mostly living in Utah, without ever going there.

I had just met Daniel and he found out I had never seen Delicate Arch. He demanded that I get into his car and we made the drive, camping somewhere in the park on a freezing October night. That morning we hiked to a ledge so we could see the Arch off in the distance. Looking back, I have no idea why we didn't do the longer hike to the Arch itself, but we didn't.

A few months later we returned with Anna and Emma and hiked to the Arch itself in the middle of the night.

If you've never been there, it's really hard to understand it. Delicate Arch sits on top of a cliff that seems to stick up much higher than anything else for miles around it. The Arch and the very small area next to it up on this high plateau feels like it's reaching for the sky, and almost like it's in another world.

Dramatic and mostly sheer cliffs drop down nearly all the way around this plateau. And the Arch sits on a ledge, so much more startling and so much larger than I ever expect it to be, even though I've visited it dozens of times now.

The first time I saw it up close, on that night hike at the beginning of 2012, is something I will never forget.

After trekking up a rocky mountainside for nearly 2 miles, we finally came to a ledge, with a wall to our right. We carefully made our way up and across this ledge, keeping ourselves as close to the wall as we could.

And then, suddenly, the wall gave way, and the Arch came into view.

I had seen pictures of it all my life. But suddenly seeing its dark and dramatic silhouette was haunting and I remember stopping and gasping and feeling a chill come over my whole body.

It was the most beautiful thing I had ever seen.

Scary, in some way, although it's hard to explain why.

This thing, this world-famous thing, has been perched on its ledge, in slowly-evolving forms, silent and immovable, miles from recent civilization, high in the sky, for millions of years. And here I was in the middle of a dark night stumbling upon it. This thing, this world-famous thing, that existed long before I ever did and which will exist, in slowly-evolving forms, long after I die.

The Milky Way glowed down on it. The Arch was slightly lit by the stars, but the steep drop-offs into nothingness all around it were black holes, making it look like this one iconic piece of petrified rainbow was floating in space.

And that space was so silent. Nothing surrounded us but sky, and so our voices were almost reverently muffled by the total lack of anything for sound reverberation.

We walked to it, and sat underneath it.

Being underneath it was somehow simultaneously creepy and comforting. I don't know if any natural wonder had ever made me feel so vulnerable, and certainly none has since.

I had seen Michelangelo's Pieta and it had made me feel things I didn't know a statue could ever make someone feel. I remember staring at that in silence, wondering how something could look so perfect, and wondering why I couldn't stop looking.

This felt like that, except magnified, and on such a grander scale.

Since that night, Delicate Arch has become a grounding place for me. Visiting it somehow resets my anxiety in the way nothing else ever has.

Last Thursday, Skylar, Emma, and I set off on a night hike to the Arch just an hour or two after we arrived in Moab.

There was a full moon that night, so bright that we didn't need flashlights to find our way across the rock.

Lit by the moon, it was every bit as haunting and wonderful as it always is.

My photos will never do it justice. I'm using an iPhone. If you want to see more accurate images of the place, find some photography blogs on the internets.

The next day we hiked around some of the dozens of other well-known spots, ending with a sunset view of Delicate Arch from the cliff Daniel and I first visited 7 years ago.

We had a photo shoot there, of course.

The next morning we woke up at an illegal hour so we could hike back to the Arch and watch the sunrise.

It was chilly. Once again, the nearly full moon lit the way for us.

I had never hiked the Arch early in the morning before, and I am so glad we did it. Because it was breathtaking.

As we sat on a ledge, silently watching it slowly light up, we suddenly saw a small group of definitely BYU students show up. We could tell they were from BYU, mostly, because of the looks of youthful optimism in their eyes that hadn't yet been crushed by the world.

A man and woman who were probably born sometime after Britney's 2007 meltdown broke away from the group and went and stood under the Arch while the rest pulled out $80,000 cameras to capture what must have been the longest proposal I have ever witnessed in my life.

I had a hard time just getting into the moment and enjoying it with them because my motherly instincts kicked in and I was having to consciously restrain myself from screaming "GET AWAY FROM THE LEDGE" every time the man picked up the woman in a tearful embrace because THEY WERE STANDING LIKE 2 FEET FROM A CLIFF THAT DROPPED OFF INTO A NEVER-ENDING PIT.

The woman apparently said yes, and the two probably have the coolest proposal photos of all time. They left the Arch glowing and beaming from ear to ear and that was awesome for them. Plus they didn't die.

I can't imagine anything worse than being a part of a public proposal so it has always been a fascinating mystery to me why people do them.

And so, tell me about your proposal, or the most interesting proposal you've ever heard of.

And while you're thinking about that, don't forget to check out our latest story from Strangerville.

This time in Strangerville, Meg informs Eli that he will be the last person to know if she ever becomes pregnant. Which is disappointing. Also, a tinder date goes very very wrong.StoryYou Don’t Need This, by Jimmy Rickard (music by bensound.com)Production by Eli McCann and Meg Walter 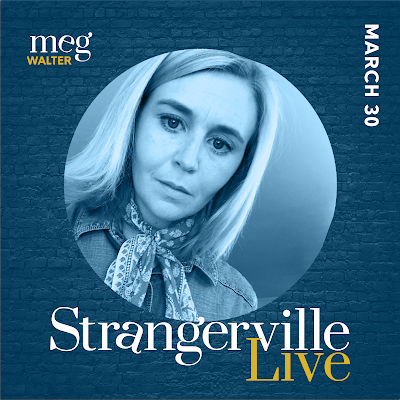 After being poisoned by essential oils in our last Strangerville Live show, we decided that it was probably time to find a new venue. I'm learning that Meg is one

This time in Strangerville, Meg informs Eli that he will be the last person to know if she ever becomes pregnant. Which is disappointing. Also, a tinder date goes very very wrong. Story You Don’t Need This, by Jimmy Rickard (music by bensound.