Look, I know you people think I'm incompetent. In the kitchen. Shame on all of you who started nodding your heads after the first sentence and before I could qualify it.

That reminds me--last night Skylar and I were talking about one of our past Strangerville Live shows and I said "oh that show was great. So-and-so's story was my favorite that night" and Skylar said, "totally. But yours was pretty good, too." And I was like "OBVIOUSLY I WASN'T INCLUDING MYSELF IN THE COMPETITION BUT I'M GLAD TO KNOW YOU WERE."

Skylar is up against some, frankly, very reasonable expectations that I have for him and he doesn't always do that well. These expectations are that he considers me the best at everything all the time no matter what and he puts his life on the line for this belief if required.

The expectations were formed from years and years of Bob and Cathie telling me after every single performance of any kind whatsoever that I was the "best one." This included a time when I was 14 and I ran a cross country race and took dead last, after all the boys and the girls. They had already taken down the finish line by the time I got to it and most people lingering in the area assumed I was just coming back around for a cool down run after the race because I was so far behind that nobody could have possibly fathomed that I was still competing.


Bob and Cathie were in the stands screaming my name when I entered the finish area, acting like they were Michael Jordan's parents at the final game of the NBA finals.

On the way home, Cathie turned around from from the passenger's seat, a huge grin on her face, and sincerely said, "I watched every runner go by before you finished and none of them were running as smoothly as you!"

For some children, this kind of positive reinforcement might have deflated their motivation to ever try. It made me want to do whatever I had to do so that my mother never again had to try to convince herself that the victor is the one who runs most smoothly. Whatever the hell that even means.

But look. You people think I'm incompetent in the kitchen, and I don't like that.

I know that I deserve your mockery because of that time I told you about how I thought The Great British Baking Show had taught me to make a cake, and, well, as it turns out, it didn't. I know that I don't have a good track record when it comes to using the oven.

But on Sunday morning I woke up and I said to myself I said "Eli, you gone bake today." I was already flipping through a cook book when Skylar yelled something about "isn't this supposed to be The Year of Health for you."

Sometimes when Skylar says things at me that I don't want to hear, I like to say back to him, "oh I'm sorry. Was I making a face that indicated to you that I was looking for your input on this?"

When The Suzzzzzzzzzz told a story on Strangerville Live, she brought me a baking book as a gift. That's how we do things at Strangerville Live, by the way. We manipulate people into spending an absurd amount of time to write and practice a story, we throw them onto a stage and make them entertain us, and then we expect them to give us a gift at the end to thank us for talking to them.

It was the Suzzzzzzz's book that I used to find a cookie recipe that looked really complicated, but the first page was like "you can do this! You are better than this recipe! You are the smoothest runner!" And I'm a sucker for pep talks and since I already had all of the ingredients I dog eared the page and yelled "sold!" and Skylar was like "what's sold?" and I was like "I WILL CUTTT YOU."

Look how amazing I am!

Then I baked them:

Also, they were delicious, if I do say so myself.

So you could say you people were being very unfair when you called me incompetent.

You can make it up to me by coming to our Strangerville Live show next month. 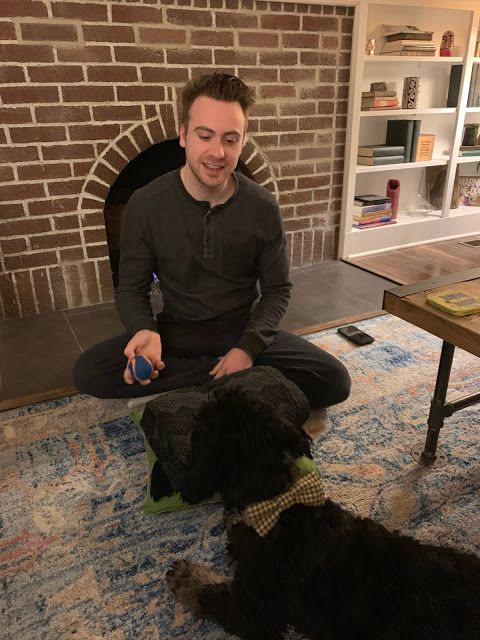 (Yo. Strangerville Live is February 22. You should get your tickets. Meg and Jolyn are doing a circus routine. Something about a bearded lady and roller skates. I'm scared, too.