This week we've got our first of four stories from our recent Strangerville Live show. This one comes from the very funny Janilee Johnson. You can find the recording on this week's Strangerville, which also includes very important conversations between me and Meg about such topics as Harry Potter and Meg's parenting. Feel free to check out a written version of Janilee's story below as well.

By the time I was 11, I had already called 911 twenty-three times. If you have siblings, you’ll understand. I had to call when my sister stole my shirt and wore it to school—that’s theft, a crime. I also had two other sisters, and two brothers. That is a lot of potential for crimes. But in a big family after a certain number, parents are just like . . . eh.

So, the police had to be brought into the situation. My sister stole my shirt (again--theft). My brothers had written on the walls (graffiti). My mom forgot to pick me up from school (hate crime?).

However, I mostly had to call because I was (am) definitely sure there’s a murderer, or kidnapper, or—and most likely—terrorists outside of my home. I grew up in South Ogden, Utah, the perfect place for a terrorist organization to hide.

Which is, I think, why my brother Shawn decided to become a cop. Or maybe he just wanted to be able to drive over the speed limit. Cops are a simple people.

Luckily, I had my own phone line into my room, and the police respond VERY quickly in burglar/murderer/terrorist/etc. scenarios. They never charged my sister with theft, or my brother with criminal mischief, and the terrorists of South Ogden responsible for making scary noises in my room at night were able to avoid the police every time. But the cops did always arrive.

My street is not easy to find. But police could find our house quickly if they knew to look for the minivan out front. My mother drove it--a large Teal Minivan with a custom leather bra on the front and large magnets advertising her scrap-booking business on the side. I grew up in this van. Unfortunately, there weren’t enough seats for all of my siblings and me, so I would just lie on the floor in the back, across their feet and sleep. It was a bed Serta would be proud of.

Despite the recurring disasters in my life there is one call I made to the guys over at 911 that stands out.

I remember it vividly. The scene: South Ogden--possible terrorism headquarters. I’m sitting at the table in my kitchen. 11-years-old. 3pm. The teal minivan in the driveway. All the lights in the house on. The door locked. Home Alone. Chubby. Hungry. In danger.

Now, in case this is being recorded, and because I know the NSA is listening, to avoid any possible associations with unsavory people, or targeting, we’ll call these terrorists “ShmAl-Qaeda”.

My parents’ house has a huuuuuuuge window that covers most of the back part of the house. The secret about that window is that you can kick part of it really hard and use it as a door to get inside. Don’t tell anyone that. Don’t google where I live. Or do, it’s just my parents there now; they’re getting old and they’ll probably die soon. They’re like 50.

I sit at the table, contemplating important 11-year-old things. How does a plane work? Why is math hard? Where are the snacks? Did my mom hide the Poptarts from me again?

Suddenly--the quiet of the neighborhood is stolen. A car alarm. A MINIVAN’s car alarm. Now I am not paranoid, but a burglar had absolutely located my remote home, approached it silently through the thick trees, walked down the long and steep driveway, and was attempting to break into my minivan.

And that is where I sleep.

I take the house phone—which is a phone that is attached to the house—and dial my dad immediately. Number memorized. I tell him our house is under attack by, a burglar maybe, or it more likely ShmAl-Qaeda.

He tells me to look outside and turn the minivan’s alarm off. which is EXACTLY what ShmAl-Qaeda would want.

My dad shoulda known better. He is a smart guy, a rocket scientist, reads books, collects change he finds on the ground, goes for 21-mile walks at 4am, uses a rotary phone, thinks plucking your eyebrows is a sin, banned us from going to Carl’s Jr for 5 years because they didn’t give him enough onion rings once. He may not always have good advice, actually.

I don’t go look outside. I’m not dying today, not even to save the van.

Suddenly, the car alarm stops.
How? Without a human being. How? How does this science work? Like the internet, no one will ever know.

I slowly creep back to my precious kitchen table of safety and continue to get back to my task of thinking about Nick Jonas, his face, his hair, our future together . . .

Now, I have just survived one of ShmAl-Qaeda’s attacks on my mom’s beautiful teal minivan and my heart is in no condition to maintain stamina during hand-to-hand combat.

The KNOCKING continues, which turns to BANGING. I hold absolutely still (A useful reaction I have when I am scared, thanks Jurassic Park, 1993) But ShmAl-Qaeda is no Tyrannosaurus, they want the suburbs of South Ogden, Utah to be terrorized. It all starts with knocking. Knocking never leads anywhere good. You all know this because you've had missionaries visit.

BANG BANG. I snap out of it. I run. Rather, I waddle quickly all the way across my parents’ house. The only doors in the house that lock are the bathrooms, and my parents' bedroom.

Adult Janilee would’ve chosen the bathroom, not just because it has an easy escape route, but also because I have to pee when I’m nervous.

Instead I choose the one room in the house that is the most unfamiliar. My parents' room. I have gone in there like 4 times. Normally I avoid it. Because you know what happens in there? I wish I didn’t.  They sit quietly next to each other and read books. Paper books. Disgusting.

Now the knocking is coming from a different door. I’m surrounded.

After my chubby 11-year-old-self locks my parents’ door. I run to the side of the bed that has a small space between the wall and the bed, my dad’s side.

Now keep in mind—We didn’t have guns in the house, that would be dangerous.

I go to the space on the side of the bed and I see . . . a machete. Like a legit huge machete. Just on the ground. I am 11 years old and I just walked into a room in my own home. I didn’t go through any secret spaces to get there, I’m just next to the bed, and there’s a machete sitting there. I can’t touch it.

I choose my preferred method of resistance from Shmal-Qaeda. I lie down on the ground next to the machete. Not under the bed. Not with it in my hand. Just lying there on the ground, poised for action.

The knocking doesn’t stop. (These missionaries are persistent)

THE SOUND OF SOMEONE KICKING THE BACK WINDOW.

HOW DID SHMAL-QAEDA KNOW ABOUT THAT SECRET?

They have been watching me for weeks, waiting for me to be alone. My options here, lying next to this machete and rotary phone, are: to call my dad (who has failed me once today), to call my mom my mom (who hid the poptarts from me in all likelihood), or to call 911.

The police answer the phone. “911 whats the location of your emergency”

POSSIBLE SOUNDS OF SOMEONE IS INSIDE.

AT THE SAME TIME A LOUD BANGING OUT BACK FROM NEAR OUR BASEMENT DOOR.

I stare at the machete.

“Hello, 911, whats the location of your emergency?”

“Hi, Sharon, its me, Janilee. ShmAl-Qaeda is back.” I give the 911 call taker all the information.

“Yeah, the teal minivan will be outside again, your guys should be able to find it.”

An 11 year old stuck in a house with a burglar or group of terrorists is a call where the police get to put on their big lights and loud sirens—and let me tell you they love those lights and sirens.

Cops are a simple people.

They arrive. Sharon tells me they have guns drawn and are outside staging. She does not ask if I have a machete.

She pauses. “Don’t you have a brother named Shawn?”

Oh my god, ShmAl-Qaeda has my brother hostage. I am now holding the machete. “Janilee, Go outside”

I go outside. I see the cops. I see my brother. I don’t see ShmAl-Qaeda. Shawn is down on the ground, cuffed.

My brother had come to check on me, and when I didn’t answer he tried to get in through the back window, then got bored and began hitting things outside with a big stick.

Cops are a simple people.

A group of cops tackling to the ground another officer for suspicious knocking habits, and then being greeted by an 11 year old with a machete is a record I hope the South Ogden Police Department kept.

Now, 13 years later, I am a 911 call-taker, and Sharon and I never forget to ask if there is a machete present.

You guys. There are parts of this whole celebrity/CEO/world emperor college cheating scandal that are AMAZING. I have spent the last eleventy hours reading every document I can 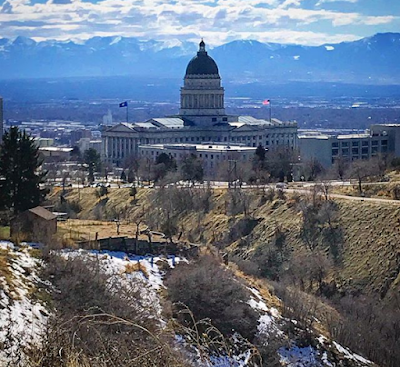 My state has been debating a bill that would try to ban conversion therapy. As you could guess, this is a topic about which I have some thoughts. I've never