You know what's not ok? THIS:

I think he's just doing it to spite me now. I started screaming last week when I saw it because I have abusively lectured my husband like 71 times about this and he refuses to learn.

"Aren't they three feet apart?" he asks, like he hasn't just committed another act of terrorism in front of our sidewalk.

"THOSE BINS ARE TOUCHING EACH OTHER."

Last week when I demanded to know why he couldn't get this right he snapped back "I get my inspiration to fail from watching you load the dishwasher," which, yes, was very funny, but also WHOSE SIDE ARE YOU ON. And before you answer that I want you to remember which one of us is saving for you all to go to college one day. Or rather which one of us was saving for you to all go to college before he had to start paying for 12 different streaming services a few months ago because I don't know if you've noticed but they've been spreading out tv lately.

It's entirely possible he's doing the trash bin thing intentionally and in hopes that I won't ask him to take them out to the curb anymore. I get it. I employ the same tactic with laundry. I only had to ruin like nine of his sweaters before I was permanently banned from the task.

I legit almost entered the Witness Protection Program in 2017 when I washed a pair of his jeans, by the way. I had already gotten in trouble for washing a couple of items that weren't supposed to be washed and you would have thought I had been babysitting his toddler and lost her at a strip club in Miami the way he reacted on those occasions.

Skylar was traveling for work every week at this time and the day he left for a work trip I accidentally washed a pair of jeans that he absolutely didn't want me to wash because apparently washing jeans ruins them (this is a thing I would have never discovered had I not married a homosexual). Well, when I realized what I had done I threw the jeans away and convinced him he must have lost them on a business trip because I am exceptionally good at self preservation.

Anyway, the point is, I'm not allowed to do laundry, and that's fine by me because laundry is terrible. But taking the bins out is honestly not that bad as far as around-the-house tasks are concerned. Like, if you're going to fail your way out of a responsibility, make it grocery shopping (which I've successfully done) or calling customer service lines because of a billing issue (which I'm working on). Don't suck at something that literally takes two minutes.

Yesterday we emptied the living room of all its furniture so we could do a deep clean of the floors and baseboards and shelves. After an hour I looked down at Skylar on his hands a knees, vigorously scrubbing a corner of the room, sweat on his brow, his breathing labored. He stayed in that same spot for several minutes, occasionally dipping a dirty rag into a bucket of hot soapy water and ringing it out.

I didn't know him when I bought this little old house, but he's very much made it his own, to the point that he's as proud of it as I've ever been. That means a lot to me.

Just out the window I could see a perky hibiscus tree he planted against my protests that I now realize were wrong--the tree is beautiful. His medical school books were strewn across the dining room table just behind me.

I looked down at him as he shook his right hand which was cramping from all the scrubbing, and I thought, "poor dear. He really needs to try to fail harder."

(Survivor fans, please check out my article on Season 40)

And please enjoy this week's Strangerville:

This time in Strangerville, we’re afraid of aliens. And a woman tells a story about living in Kuwait as the COVID pandemic broke out. 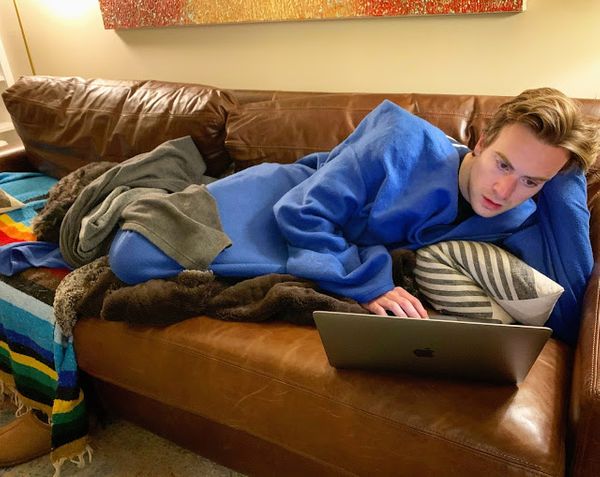 Skylar's big test that he's been studying for since before the war is at the end of next week. It's called "Step 1" or "the boards?" or "the reason I've

This time in Strangerville, we’re afraid of aliens. And a woman tells a story about living in Kuwait as the COVID pandemic broke out. Story Kuwait, by Kristi Bower (music by Gillicuddy) Production by Eli McCann & Meg Walter https://traffic.libsyn.com/