Last night I made it back to the land of coconuts. Daniel picked me up at the airport at 8:15, drenched completely in sweat, just like he was when he dropped me off at the same spot over two weeks ago. After 34 hours of traveling, it was comforting to see a friendly face again.

My sister Krishelle and I got to the Salt Lake airport early Sunday morning after Bob and Cathie dropped us off and told us to be careful and not to talk to strangers. It's like Bob and Cathie don't even know me sometimes.

Krishelle was able to work out her schedule to return to Palau with me and spend a few weeks hanging out on the beach, diving, and rolling her eyes at all of mine and Daniel's lame jokes. I wasn't looking forward to the long flights, but was happy to have a close friend go with me.

My trip in Salt Lake City was really wonderful. But it was also really hard. I dealt with a lot of stress during my time there. Some of the worst stress of my life actually, and much of it was unexpected. In two short weeks I feel like I aged 10 years in life experience and changed quite a bit. I learned so much about myself and my relationships with other people. I also learned more about how wonderful my family and so many of my friends are back in the U.S.

With all of that exhaustion, I was relieved that I was going to have Krishelle as my travel companion for the next 3 million hours and that I wouldn't have to go it alone again. Then the man who was checking us in got off of a phone call he had casually made and said something terrible, but in a voice like he was merely commenting on the weather to pass time.

United Employee: Well, looks like you can't go to Palau mam. Your passport must be valid for 6 months and yours expires in 5 months and 24 days.

I thought this had to be a joke.

Eli: No. This is not the end of this. Get whoever you need to back on the phone and let me talk to them.

The United man explained that the company wasn't willing to take the risk of sending Krishelle and having her get rejected in the Palauan airport. I tried to explain that that would NEVER happen in Palau because in the off chance that they would even care that her passport expires in October (MONTHS after her return ticket date) half the people in the airport probably know she's coming anyway and wouldn't consider her any kind of a risk.

The United people were more interested in aggressively telling us that this was all our fault and not theirs rather than trying to help us come up with some kind of a solution.

I've said it before but let me say it again to all listening ears out there: United Airlines is one of the most horrible wretched despicable organizations ever created by man. It does not care about customer service and it doesn't deserve to continue existing. Twice up the barrel, once down the side.

I told them repeatedly that I didn't care about whose fault it was and that I just needed them to make an effort to help us figure out what to do. Eventually the United man got back on the phone, with a roll of the eyes, and asked someone in their international travel office to call Palau and see if it would be ok for Krishelle to come.

At this point we only had about 35 minutes until take-off, and the security line looked like Black Friday at Walmart.

Krishelle told me to just go since there wasn't much else I could do. It felt weird leaving her there, but I couldn't miss this flight.

I became "that guy." I went to the front of the very long security line and apologetically announced to everyone that my flight was leaving in about 30 minutes so I was going to unabashedly cut straight to the front. Several kind people in the line loudly responded that they understood and wished me luck. Then the crowd parted like Moses and the Red Sea and I was ushered straight through.

If any of you security line people out there are reading this, I thank you from the bottom of my heart.

I think this was one of those Karma things because for years I have sent countless people through security at the airport ahead of me if ever the person standing behind me looked more panicked than I felt. I hope all of that Karma wasn't used up in this one moment, though.

I got to my gate just a few minutes before they closed it.

And I flew all the way to Palau alone.

Well, I mean, there were other people too. But Krishelle wasn't there. Eventually United turned her away and told her she could catch a flight in a few weeks once her passport is renewed.

I'm still not convinced that Krishelle is a terrorist and has been living a double life and that's the real reason they wouldn't let her go.

4 flights, 3 layovers, 2 books, and 1 nervous breakdown later, I arrived at the tiny Palauan airport, walked straight through the unbelievably casual immigration booth, picked up my bag, and found Daniel's smiling and sweaty face.

Daniel had already gotten word about Krishelle and was hopeful that it was some kind of practical joke. Daniel is practically a member of my family and he and Krishelle are particularly close, having traveled together internationally a few times and having spent quite a bit of time together otherwise. So this was sad news for him as well.

He knew how disappointed I was going to be so he hid his own disappointment and tried to convince me on the dark drive through the jungle that this was actually a good thing because I can get caught up on work before Krishelle comes.

Everyone needs a Daniel in their life. Not only does he wash puke off of you and drag your unconscious body through the apartment when you have the stomach flu, but he also takes seriously his duty to make the bad seem not so bad to a friend who could use some optimism.

We finally pulled up to our building, home at last. When we walked into the apartment I had the strangest sense come over me. I felt like it had been so long since I had been in Palau. I felt like I was returning to a life that was a part of my past. I felt nostalgia, but nostalgia for a life that I am currently living and experiencing.

I had a flashback to the first time I walked into that apartment, also around 9:00 PM after having come from the airport. I remembered so well the sense of panic I had then when my bags were lost and my shipped boxes had only half arrived and were largely destroyed. I could almost feel those feelings I felt when I climbed into the shower and broke down into tears of stress that night, last October.

As odd as it sounds, I felt a smile come over my face last night as I thought about this, standing in that same apartment, feeling that same, but sort of different, fatigue. There was this sense of accomplishment. The kind of accomplishment that comes from realizing that you are now able to experience something with a feeling of direction when the last time you experienced it you weren't quite strong enough to love the moment. It was like I could actually see how much stronger I have become in 6 months of diving, adjusting, throwing up, hiking, working, experiencing isolation, and worrying over an unsure future and potential loneliness.

I pulled several items out of my bag that Daniel asked me to pick up for him in the U.S. and handed them over to his excited hands. He caught me up on everything I missed. And despite everything else I have ever felt in my time here in Palau, I was very home in that moment. Like I had made it to the place of refuge at a hard journey's end. Even though that journey is only a small one within its own larger journey. But feeling at home in that moment made me realize that I can feel so at home in so many other moments in the future. And that's comforting. And exciting.

Life is funny like that. Sometimes in all the stress and anxiety of an experience it's hard to remember that stress and anxiety are not permanent states of being. That one moment of "what the heck have I done" can so quickly turn into a lifetime of "I'm so happy that I've done what I've done." And maybe I have several months of difficult times ahead, followed by many years of more difficult decisions and experiences, but I always want to remember that epiphany I had at 9:00 PM, buried deep in the equatorial Pacific, drenched in sweat and fatigue, but happy.

We might not always see it at the time, but all hard experiences are just a way for us to know a deeper happiness in the future.

When we first got to Palau, we noticed a gigantic spider perched in the center of a large web near the stairs leading to our apartment. The spider was high above even Daniel's freakishly circus-level reach. Daniel hates spiders, like any good and decent 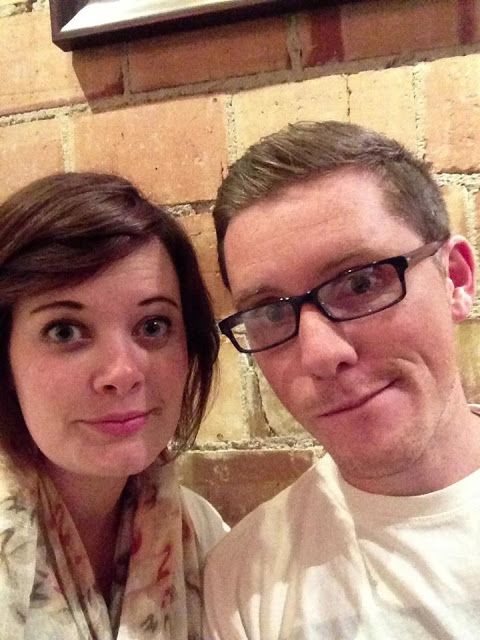 Ok, first of all, I know! Today is supposed to be a pictures and distractions post. I know the schedule guys. I'm the one who created it. And now I'm