A Conversation with Bob and Cathie about being a Grown Up
Cathie: Son. Did you really get a speeding ticket a few weeks ago?
Eli: How did you guys hear about that!?
Bob: You posted it on your blog. For the whole world to see.
Eli: THE WHOLE WORLD CAN SEE THAT BLOG!? I THOUGHT IT WAS A PRIVATE JOURNAL!
Cathie: We wish it was a private journal. At least then social services wouldn't be coming after us for things that aren't even true.
Eli: Hold on, Cathie. What have I said in my blog that isn't even true?

Cathie: Well you just make us sound like we were callous mean parents, willing to play jokes on their children at all costs.
Eli: Hold on, Cathie. What have I said in my blog that isn't even true?
Bob: We had boundaries, son. Sure we convinced you that you had ingested poison when you were seven and that you only had 24 hours to live. But we didn't actually give you poison.
Cathie: And we only told you that so you would be nice to your sisters, believing it was your last day on Earth.
Eli: Who raised you people?
Bob: But seriously, did you really get a speeding ticket?
Eli: Why do I feel like I'm in trouble. I'm THIRTY now. You guys can't hurt me anymore.
Cathie: We're just very concerned that you apparently don't know what car registration is.
Eli: Ok, Bob and Cathie. I see where this is going. I know what car registration is.
Bob: Oh really? What is it?
Eli: It's a piece of paper and you keep it in your glove box. Well I don't, apparently. But most people do. I remember because the nice cop lady was like, "why don't you look in your glove box and I love your hair" and then she didn't even want any of the candy I found in there because--
Bob: We believe you that you know where it should be kept. But do you know what it is?
Eli: Yes. It's registration.
Cathie: Right. But what is "registration."
Eli: [Looking at Bob] Can you believe this lady? 60 years old and she doesn't know what registration is.
Cathie: I know very well what it is. The reason we are asking you is because we are concerned about your ability to survive in this world.
[Bob and Cathie take one another's hands and look intently at Eli, concern building up in their faces]
Eli: Oh. My. Gosh. IS THIS AN INTERVENTION!? I've always wanted an intervention! Did you write letters!? Wait, can I practice storming out of the room?! Are there cameras?! Are we on TV?! Are we celebrities?!  OH MY GOSH WHAT IF PAUL SIMON?! WHATIFPAULSIMON!??!?!?!?
Bob: No. We are not on TV. Yes this is an intervention. No, we didn't write letters.
Cathie: We didn't think you would pay attention long enough to listen to our letters--
Eli: WHAT ABOUT PAUL SIMON?!?!?
Bob: Paul Simon isn't here. Let's take a minute and stop thinking about Paul Simon.
Eli: NO! YOU PERVERTED RACIST MURDERER!!!
Cathie: This whole conversation has gotten away from us. Eli. We just want to talk to you about where your life is headed. You're not a child anymore. You need to start thinking about what you're going to do with your life. Your sisters are already buying houses and building equity and--
Eli: Do they know what registration is?
Bob: . . . yes. We think they probably know what registration is.
Cathie: What are you doing?
Eli: I'm texting my sisters to ask them what registration is.
Cathie: We could tell you. We're right here.
Eli: Fat chance. Like I'm going to listen to a couple of parents who raised a thirty year old to be like me.
~It Just Gets Stranger 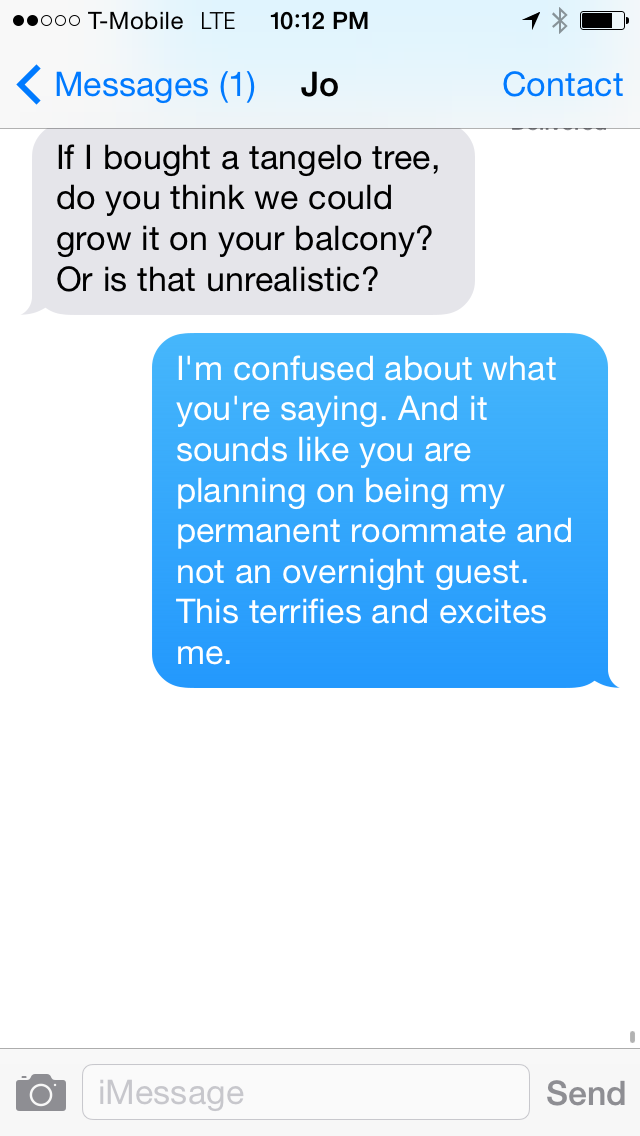 Sometime Last Week Jolyn: I need to be out of my place soon. Can I come stay with you for one night while I'm in transition? Eli: I feel like