Excuse me. But I guess I'M A TECHNOLOGY GENIUS! Because I just basically technologied all over the entire Internet to bring you today's post.

A while back the three most recent Youtube videos of my stories on The Porch were tragically deleted from the Internets. I went to Facebook to ask whether any Strangers out there happened to download these videos (if that was even possible). Stranger David, who shall rule the land with Alanna for all eternity, then emailed me with the audio files of those videos. He and his friends had downloaded the audio to listen in their car on a road trip.

I didn't know what I was supposed to do with this information, so I just kept it in my inbox for several weeks, hoping for effortless enlightenment.

Then, last weekend, I finally became fed up with my own incompetency, so I read the entire Internet and learned everything possible and I'm basically Lucy from that awful movie wherein Scarlet Johansson is able to use 100% of her brain capacity which obviously means she is an all-knowing immortal being who is everywhere and nowhere at the same time JUST like Catholic God.


What I mean is, I learned how to turn audio files into videos, upload those videos onto Youtube, and share them on Stranger. So now those videos are available on the Video tab.

As you know, this Saturday we were back on The Porch, wherein Bob and Cathie were made to feel exceptionally uncomfortable because of profanity, vulgarity, and general irreverence. Note: Cathie always calls me after The Porch to inform that my story was the best one and she's not even remotely biased so we HAVE to take her word for it.

Jolyn Metro, that great being of wonder and light, recorded the story, as she always does, and graciously uploaded the video on the Youtubes. Then The Porch's host, Derrick, sent me the audio recording he had. Well, because the venue was a giant warehouse, the audio on Jolyn's video wasn't as good as the audio Derrick recorded from the mic.

SO, I called on the powers of Satan (because technology is his jurisdiction and if you try to go to God first he just gets super annoyed and refers you anyway). I figured out how to download the video from Youtube, the audio from email, and combine and sync them in a program just in time to upload them back to Youtube AND I ate an exceptional amount of candy and played with Mr. Pants while doing so.

And after all of that work, if everyone doesn't watch the below video eleventy times each, then I wasted a lot of time AND I GUESS THIS ISN'T EVEN AMERICA ANYMORE.

P.S. It's Jolyn's birthday. So let's all sing to her and tell her what we like about her. I'll go first: Jolyn, I love that I fear you, and I fear that I love you. 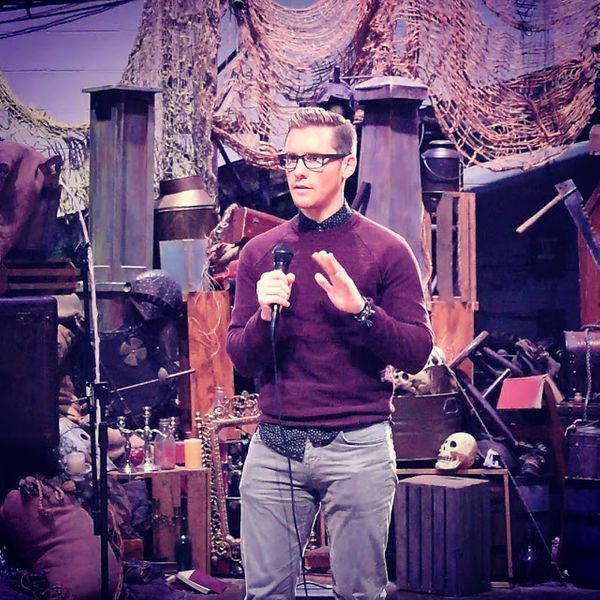 Last night I was talking about Fabio, as we all do a few times a week, and I asked my friend Skylar, Eli: How old do you think Fabio is?

Because it's been a while. February 15, 1995 (10 years old): Did you know that if you turn a butterfly from a slug it doesnt turn back and thats why when a persen changes in to a better HUMAN BEING they will never becom