We all get to agree that 2016 was a weird year. I say "was" even though it isn't actually over yet. I'm confident in the statement anyway. Nothing can happen in the next few days to make 2016 not a weird year.

So it shouldn't have been a surprise when this morning happened.

It started snowing on Christmas Eve in Salt Lake City. Apocalypse snowing. Snowing so much that there is currently an avalanche risk in Ecuador.

I know we're supposed to just be super happy about snow on Christmas because all of the songs have manipulated us into believing that it makes the season more magical. But I will not be duped.

Snow is a necessary evil in my neck of the woods. I appreciate it for hydrating the land and cleansing the air. But it is not magical.

It is cold, wet, and it always feels vindictive. Like, I don't know for sure if God is using it as a punishment, but every time I see the first snow flakes of the season start descending upon us I can't help but wonder if it's happening because of all the trashy television I watched throughout the year.


By the time I woke up on Christmas morning there was so much snow that I could only open the door to my driveway with great difficulty. There was over a foot at my house and it was still coming down. It looked like this outside.

No. This is not beautiful. This ruins lives.

It took me over an hour to shovel my 12,000-foot-long driveway and dig my car out of it so I could risk my life driving to Bob and Cathie's house for family festivities.

Mr. Pants, who has been staying with me, is just beside himself. He doesn't know where to go potty since the snow is taller than him. So he keeps walking circles around the covered patio in my backyard before finally taking a crap on the cement while communicating through his eyes that he doesn't know what else to do.

It's hard being one foot tall.

Christmas ended. And then I woke up this morning and continued the nightmare.

I decided to take the day to dejunk my house, which of course meant that I opened one drawer, found a stack of old letters, and then spent the next several hours reading them before falling asleep on the floor.

But before that happened I did show the slightest amount of ambition when I up and decided to take a load of materials out to the recycling bin, which had been sitting by the back door exactly 12 feet away from the bin on my driveway for 7 weeks because I'm a lazy suckface and I don't deserve happiness.

I knew I was ill-dressed to venture into the snow or public, but because the bin was only 12 feet away from the door, I figured it would be fine to just quickly walk to it, deposit my responsibility, and quickly walk back inside.

So I pulled on a pair of boots, stepped outside, habitually pulled the door shut behind me, accomplished my task, congratulated myself with undo credit, and then walked back to the door.

And that's when I discovered, to my horror, that it was locked.

"No big deal!" I optimistically thought, and probably said out loud. "The front door is unlocked!"

I trekked around to the font of the house. Sure enough, the glass door was shut, but the door behind it was wide open.

There stood Mr. Pants, looking out at me. I politely waved to him as I ascended the steps and then pulled on the glass door.

It was also locked.

I have no memory of locking it.

I now knew I was in trouble.

The front door was my backup plan.

I had no other plans.

I stared at Mr. Pants. He stared at me. And then I started talking to him.

Because I am a grown man who has complicated conversations with animals.

"Mr. Pants! I wish you were tall enough to unlock this door! Can you call someone for help? My phone is on the floor in the bedroom!"

And then I heard it.

It came from next door.

The last voice I wanted to hear in that moment.

Mr. Perfect: Everything ok over there?

I will now share with you the outfit in which I was clad as Mr. Perfect addressed me.

Note, too, that the shirt was on inside out. That's the tag you can see pictured above.
Eli: Awesome. Uh, no. I'm ok.
Mr. Perfect: Are you locked out of the house?
Eli: Well, yes I am.
Mr. Perfect: But is someone in there? You were just talking to someone.
Eli: You know what? I'm not even going to try to make up a story for you right now. There is a small white dog inside and I was talking to him. I was trying to coordinate a plan with him to get help. Because you know how you hear about those dogs that call 911? Well I thought maybe this one could do that. But I just realized that he doesn't even know how to unlock my phone so that plan was stupid anyway.
Mr. Perfect: You were going to have your dog call 911 because you're locked out of your house?
Eli: Yup. And to give you some more honesty, this wouldn't even have been the stupidest reason I have called 911. This year.
Mr. Perfect: Does anyone have a spare key?
Eli: Yes, actually. A few friends do, but I can't call them because my phone is inside.
Mr. Perfect offered to let me use his phone, which I gratefully accepted. Then when I got it into my hands I realized that I know exactly four phone numbers.
1. My Cell Number: Not helpful, unless I wanted to call Mr. Pants.
2. My Office Number: Even less helpful.
3. Sam's Parents' Phone Number That They've Had Since 1992: Not helpful, unless I want to know if Sam can come out and play, but he doesn't even live there anymore so what am I saying?
4. Bob And Cathie: Not helpful AND judgmental.
I admitted this to Mr. Perfect, gave him a lecture about how technology is ruining us, habitually put his cellphone into my pocket, and started walking back over to my house.
He asked for the phone back, which I dropped into the snow as I fumbled it out of my pocket, embarrassed because EVERYTHING I DO IN FRONT OF THESE PEOPLE IS EMBARRASSING.
I was shivering by this point, so Mr. Perfect invited me inside to warm up while I came up with a plan.
I sat in their house for thirty minutes. Their house which was ohmygosh so clean because of course it was.
They sat around me while I awkwardly made small talk.
It took me the full thirty minutes to remember that I had a spare house key in my unlocked car.
I announced this to a very relieved The Perfects, and then offered on my way out:
Eli: Merry new year--er--I mean Christmas--er--merry Chris--happy new--er--just, bye.
~It Just Gets Stranger

Just BecauseWe have somehow made it to Stranger's second to last post of 2016. I'll send you some final thoughts at the end of the week in my 2016 post. 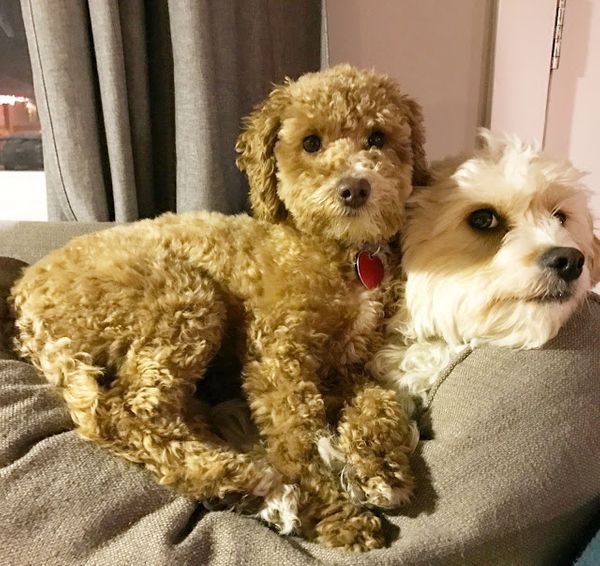 Matt had a Christmas party on Friday and I went even though I'm not very good at parties lately. See this and this. But I figured that third time's a